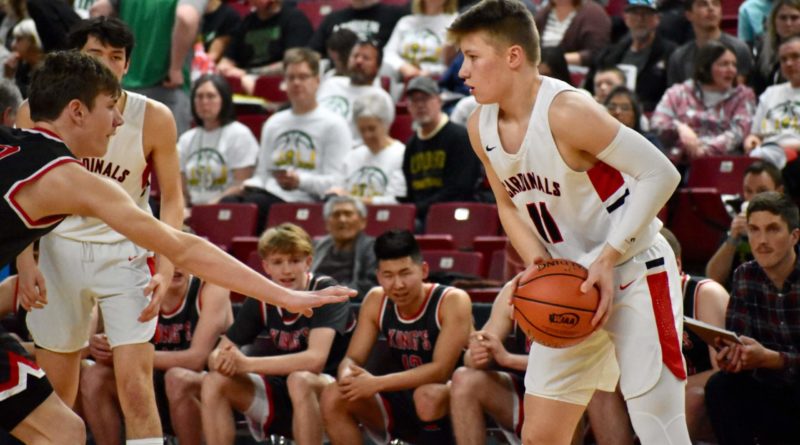 YAKIMA — The stage is set for the 1A and 2A Washington high school girls basketball tournaments, which take place on Friday afternoon and evening at the SunDome.

First, catch up on Thursday: All the quarterfinal action of eight games, with highlights and players of the game.

Rick Skeen made it very clear to his King’s team in the preseason that the team’s record wouldn’t look pretty. Or if the Knights even made it to state, their seeding would be ugly.

Tyler Linhardt’s 10-foot leaner in the lane with 1.8 seconds remaining in overtime lifted the Knights to their first championship game appearance with winning the 1A title in 2016.

“We told our kids in preseason practices that we are going to be a something-teen seed because of the schedule we played,” Skeen said. “But we knew it was going to give us our best chance to win a state title.”

But Linhardt missed both free throws, and Seattle Academy standout Leo DeBruhl sank a step-back 3-pointer over the 6-foot-big man as time expired.

“As soon as it left my hands, I knew it was going in,” DeBruhl said.

But King’s responded by making five of six field goals in overtime, including Linhardt’s game-winner.

“I saw they switched Leo on me, and it was go time from there,” Linhardt said. “I just needed to get mine, and go get a win for the team.”

He made up for his rare free throw misses in regulation with five of his team-high 22 points in the extra session.

For three quarters, he struggled to make shots. But he scored 15 of his game-high 27 points in the fourth quarter and overtime, including three 3s.

The DeBoer duo. This year marks the 20th anniversary of Roger DeBoer’s firs state championship team at Seattle Christian, and now he has his alma mater in the 1A title game for the second time in three seasons.

And, of course, there is a next-generation DeBoer on the court now, too – Jaden DeBoer. He was the best player on the floor with 28 points in 27 minutes.

Did we say DeBoer was the star of this game? He tallied 28 points on 10-fo-14 shooting, including four 3-pointers. And he is one of the team’s top defenders.

If you take away the 2-for-12 showing from the 3-point stripe, he made eight of 13 field goals closer to the basket for a team0high 24 points.

UP NEXT: King’s plays Lynden Christian in the 1A boys title Saturday at 7 p.m.

Fate. How many No. 1 teams in the state blow a 14-point lead in the fourth quarter of the most important game of the season? At least the Lions rarely do – before Friday.

Shaa Humphrey scored 16 of his game-high 21 points in the second half, and the Vikings mounted a furious fourth-quarter rally (outscored Lynden, 29-9) to reach their first state title game.

They made all 10 field-goal attempts, half of them 3-pointers (two apiece from Kobe McMillian and Jonas La Tour)

“We never had a doubt,” Humphrey said. “That was the message, that we’ve been here before and never give up.”

It has been an up-and-down last month for the sweet-shooting forward. But when the Vikings needed offense in the second half, he provided it.

The Lions’ skyscraper registered a double-double – 16 points and 11 rebounds – in helping the state’s top team build a big lead.

Two guys named Trey and Tru. They both led the come-from-behind charge in the fourth quarter as Tru Allen tallied 10 of his 19 points in the final four minutes – including two free throws to seal it with seven seconds to go.

Trey Dreadfulwater hit a big 3-pointer to give Clarkston a 36-31 lead at the 3:14 mark. He had seven points in the final quarter.

He is one of the state’s best off-the-bounce scoring threats, and Kora had a team-high 14 points and 12 rebounds.

UP NEXT: Clarkston plays North Kitsap for the 2A boys title Saturday at 3 p.m.