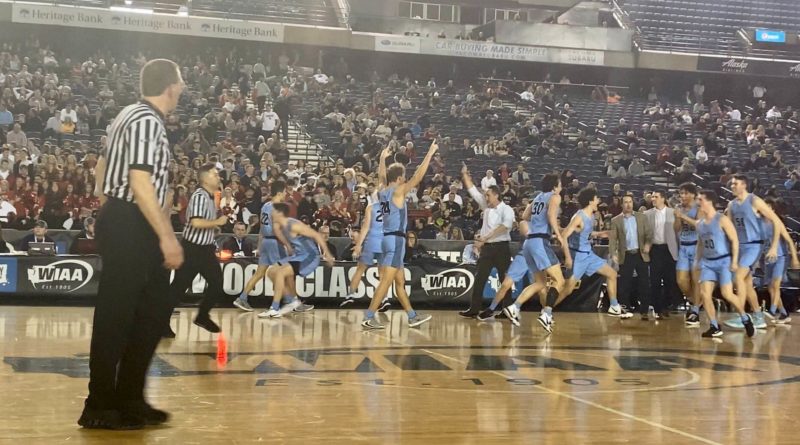 While those around the state may not have known Central Valley could be one of the last two remaining teams in 4A at the beginning of the year, the Bears players insist, they knew.

On Saturday, they showed the rest of the state why, in a 63-55 takedown of top-seeded Union in the 4A state semifinals at the Tacoma Dome.

Handing Union its first loss of the season, the Bears say, was more about wiping away records and just playing basketball. That much was evident to them at halftime, when the Bears took a two-point lead into the locker room.

“We were right in it,” Central Valley coach Mike Laws said. “They hadn’t really done anything that we didn’t expect, and the kids, we had confidence like ‘OK, we can play with these guys.’ They’re not that big of a deal.’ Good team, but undefeated teams they kind of psych you a little bit.”

Each time Union’s Tanner Toolson, named “Mr. Basketball” by the state coaches association, faced a defense that effectively stifled his production, another player stepped up. Many nights it was Kaden Horn, sometimes Josh Reznick and in two key games, Mason Hill stepped up big scoring the ball. On Friday night, Horn, a first team all-league guard, was 1 of 7 with four points. Hill had 11 and Reznick had 11 to supplement Toolson’s tough 26. That was all part of the plan, Laws said.

Jayce Simmons stole a pass from Mason Hill intended for Kaden Horn, went the length of the floor, did a euro-step layup around a contesting defender to make it a three possession game with just over two minutes left. It was one of several plays the Bears made to take the wind out of Union’s late comeback attempts.

Scored a team-high 16 points, pulled down five rebounds, hit a key 3 as a part of the team’s 15-7 run to open the third quarter, and threw down a two-handed dunk to put CV up nine with under a minute left.

Scored 26 points and logged five steals while making 7 of 9 free throws. Toolson battled through a CV defense that made him earn every point he scored, including a cutting dunk in the fourth quarter and an early step-back 3.

Central Valley advances to the 4A state championship on Saturday at 9 p.m. at the Tacoma Dome; Union drops to the third place game against Glacier Peak at 1 pm.