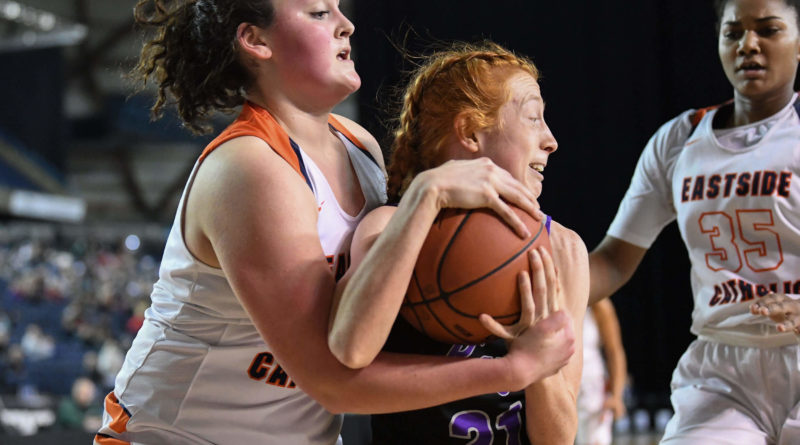 She couldn’t have dreamed then that her junior year would end in the 3A state championship game, lifting the Kangaroos over what had been the most dominant basketball team in the state.

Liesse hit four 3-pointers, scored a game-high 22 points and Lake Washington was jumping, shouting and ecstatic in celebrating their 62-49 victory over top-ranked Eastside Catholic in the 3A state semifinals on Friday in the Tacoma Dome, sending the Kangaroos to their first state-championship game since 1999.

Eastside Catholic (28-2) hadn’t lost to an in-state opponent this season before Lake Washington (22-6).

As coach Jeff Wilson would so aptly say afterward, this Lake Washington squad filled with freshmen, sophomore and juniors never looked panicked. Not in playing their first ever game in the Tacoma Dome on Wednesday – the program’s first trip here since 2014 – and not Thursday against UW-bound Jayda Noble and Mt. Spokane, and certainly not Friday against Eastside Catholic, which had only previously lost to Windward of Los Angeles, California, in the Nike Tournament of Champions earlier this season.

“Even when other teams have made their runs, we’ve never looked panicked these past three games,” Wilson said. “Just their composure has been awesome.”

“I think we all just work so well together,” Liesse said. “And we have the chemistry and that shows on the court.”

Lake Washington has shown it can compete with a track meet with any team. It certainly wasn’t scared off by Eastside Catholic’s core of talented freshmen and their penchant for beating teams up the court.

Rosa Smith added 13 points for the Kangaroos, who held Eastside Catholic to 18-for-63 shooting (28.6 percent). And even with Hani spending most of the game on the bench in foul trouble, her younger sister, freshman Sydney Hani, helped Lake Washington outrebound EC, 41-37.

Liesse’s 3-pointer with 5:37 to play gave Lake Washington a 49-42 lead and she followed with another bucket to make it 51-42 and you could feel Eastside Catholic’s state-title hopes slipping away. She followed the next possession with an assist to Elise Hani and suddenly the Kangs went from up 42-40, to up 53-42 with 4:34 left.

She scored 10 of her game-high 22 points in the first quarter and was fairly quiet after that before putting Eastside Catholic away in the final period. She also had four rebounds, two assists and did all of that on 8-for-11 shooting (4-for-5 from the 3-point line).

Walton had another double-double for the Crusaders, with the sophomore post scoring 21 points with 10 rebounds and three steals. But the Crusaders struggled from the floor, making 18 of 63 shots (28.6 percent ) for the game.

Lake Washington will try to win the program’s first state girls basketball championship when it plays in that game for the first time since 1999 at 9 p.m. Saturday at the Tacoma Dome.