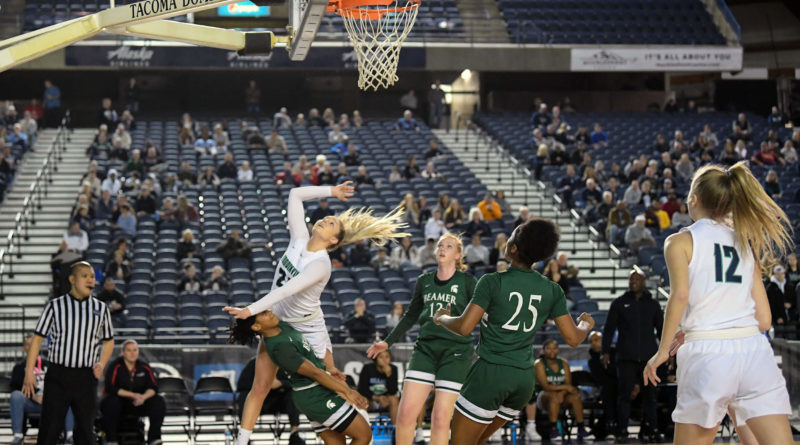 The 4A girls games took place in the morning, 3A in the afternoon.

UP NEXT: Glacier Peak plays the winner of Todd Beamer/Woodinville at 3:45 p.m. Friday in the semifinals; Chiawana drops to 4th place consolation playoff at 9 a.m. Friday.

Glacier Peak already presents an imposing defense. Combine that with a blistering shooting performance, and the Grizzlies are tough to beat. They hit 11 3s — six of them came from Malia Smith, who hit 6 of her 10 attempts — and they shot 52.4 percent from deep as a team. That was tough to catch up with. Even as Chiawana pulled within as few as three in the fourth quarter, it seemed Glacier Peak always had an answer. And Aaliyah Collins’ tight mark on five-star guard Talia Von Oelhoffen.

Scored a game-high 23 points, dished out six assists and hit three of the team’s 11 3.

Scored a team-high 18 points on 8 of 13 shooting, and pulled down eight boards

UP NEXT: Winner plays Glacier Peak at 3:45 p.m. in the semifinals; loser drops to play the Chiawana in a 4th place playoff at 10:30 a.m. Friday.

Scored 21 points on 7 of 17 shooting, hit one of her two 3-point attempts and drilled all six of her free throw attempts while also grabbing 12 rebounds.

UP NEXT: CV plays Union in Friday’s semifinals at 5:30 p.m.; Issaquah drops to a 4th place playoff against Moses Lake.

Scored 13 points as one of five Bears in double figures. She also grabbed 14 rebounds, including six on the offensive glass, dished out four assists and had two steals opposite zero turnovers.

UP NEXT: Union plays Central Valley at 5:30 p.m. Friday in the semifinals; Moses Lake drops to 4th place playoff against Issaquah.

Oberg scored a game-high 21 points on 7 of 17 shooting, pulled down even rebounds and hit 4 of 5 free throws.

Scored 12 points, including three 3-pointer, and pulled down seven board, four on the offensive glass.

Rosa Smith had 16 points and nine rebounds to lead Lake Washington to a 48-45 victory over Mt. Spokane in the WIAA Class 3A girls basketball state tournament quarterfinals on Thursday.

UP NEXT: Lake Washington plays Eastside Catholic in the semifinals at 7:15 p.m. Friday.

Lake Washington shut yet another team down from the field since it entered the Tacoma Dome. On Wednesday it was Hudson’s Bay. This time it was Mt. Spokane, which was held to 17-of-67 (25.4 percent) shooting.

Their emphasis on UW-bound Jayda Noble was critical in the first half, when Noble went 0-for-6 shooting with one point. Smith, a sophomore, made just enough big plays for the Kangaroos to pull off the upset, hanging on after Mt. Spokane’s Emma Main missed a 3-pointer in the final seconds.

What a Tacoma Dome-debut it’s been for the 5-foot-7 sophomore who scored a game-high 16 points and pulled in nine rebounds, including the clinching board late when Lake Washington was clinging to a one-point lead. Now Lake Washington heads to the state semifinals for the first time since 1999, and this comes just four months after the Kangaroos won the state girls soccer title.

It should say plenty about Noble what she did in the second half to get Mt. Spokane back into the game. After struggling in the first 16 minutes, she hit some key buckets late, including off an inbound to cut Lake Washington’s lead to 46-45 with 39 seconds remaining. She finished with 10 points, 13 rebounds and four steals but fouled out before Mt. Spokane’s final possession.

Winner: Plays Lake Washington in the 3A state semifinals at 7:15 p.m. Friday at the Tacoma Dome

Loser: Plays Mt. Spokane in 3A consolation game at 12:15 p.m. Friday at the Tacoma Dome

Zaza Walton’s tenacity. Top-ranked Eastside Catholic struggled almost all game getting anything to go into the basket, except for Walton, the 5-foot-10 sophomore who was relentless chasing down rebounds and running in transition to the tune of 20 points and 17 rebounds. The Crusaders scored 80 points in their regional win over Kennewick but struggled in this young group’s first appearance under the Tacoma Dome lights, making 17-of-61 shots (27.9 percent) for the game.

That was 6-for-30 in the first half, when Eastside Catholic led 19-17. Seattle Prep, led by Molly Moffitt’s 17 points and Tamia Stricklin’s 11, lost to EC 52-42 earlier in the season but had a 42-39 lead early in the fourth quarter of Friday’s quarterfinals.

The sophomore transfer from Kentlake had 11 offensive rebounds, finishing with 20 points, 17 rebounds for the game as the only of this extremely young Eastside Catholic team (the Crusaders don’t have a single senior and just one junior) to score in double figures. She was 8-for-18 from the floor in leading EC (28-1) to its 25th consecutive victory.

She scored four consecutive baskets in one stretch in the third quarter to give Seattle Prep the lead and scored on another strong attack to the basket to cut Eastside Catholic’s lead to 48-46 with 32.7 seconds remaining. She finished with 17 points on 6-for-11 shooting.

Winner: Plays in the 3A state semifinals at 7:15 p.m. Friday at the Tacoma Dome

Loser: Plays in 3A consolation game at 2 p.m. Friday at the Tacoma Dome

Shorecrest had led most of the game, but you knew it was going to be tough to hang on when their starters started fouling out like flies. First Amanda Lee with 2:33 left, then Kiana Lino and finally Maura Weaver, leaving the Scots to try to hang on without three key players.

But Leila Hosn got a floater to roll into the basket with 45 seconds to play before Arlington’s Hailey Hiatt hit the dagger – a pull-up jumper she said she thought she air-balled, only for it to roll in with 5.2 seconds to play. Hosn’s final fullcourt sprint and shot missed as time expired.

This was their third meeting this year, and certainly a much more contested matchup than their district-title meeting, when Arlington rolled to a 50-34 win. Shorecrest won on Dec. 20, 58-43.

She was most clutch when she was most needed. She admitted afterward that her shot felt awful when she released it with 5.2 seconds to play, but it was soft and smooth, rolling into the basket after she pulled up from about the elbow to give Arlington the lead and a few seconds later the game. Hiatt scored 17 points on 6-for-10 shooting with three rebounds and three steals. Makenzie Gage added 15 points.

Shorecrest led for most of this game thanks to the early hot-shooting from VanNess, who went 4-for-7 from beyond the arc and finished with a team-high 14 points and nine rebounds. Amanda Lee scored 12 points and Leila Hosn added 11, all in the second half.

Winner: Plays Arlington in the 3A state semifinals at 9 p.m. Friday at the Tacoma Dome

Loser: Plays Shorecrest in 3A consolation game at 2 p.m. Friday at the Tacoma Dome

This was much closer than the score indicated. Bethel’s Esmeralda Morales, the 5-foot-4 junior who scored a game-high 27 points, scored on four consecutive possessions to bring the Braves within 44-40 with just over three minutes to play, but Garfield ended the game on a 11-1 run.

Five-star recruit Dalayah Daniels was called in right after Morales’ final bucket after sitting most of the first half with three fouls and no points and then she picked up her fourth foul with about four minutes remaining in the third quarter. So pretty impressive win for Garfield despite the Tacoma Dome’s most towering post presence sitting most of the game. Daniels finished with four points and five rebounds on 1-for-4 shooting.

But Daniels about took away Bethel’s inside scoring the final minutes when she finally subbed back in. Meghan Fiso, a Michigan commit, got a key rebound and hit Sahcari Davis for a fastbreak basket to put the nail in the coffin.

With Daniels sitting most of the game, this was Fiso’s show to run. She finished with 15 points, torturing Bethel in the middle of their zone with her smooth mid-range jumper, and she collected 14 rebounds and four assists on 7-for-15 shooting. Sahcari Davis added 16 points as a much-needed second scoring option.

Few players are as fun to watch in the pick-and-roll game as Morales, who scored 27 points with five rebounds and three assists on 10-for-27 shooting. She and Tiarra Brown combined for 39 of Bethel’s 41 points.