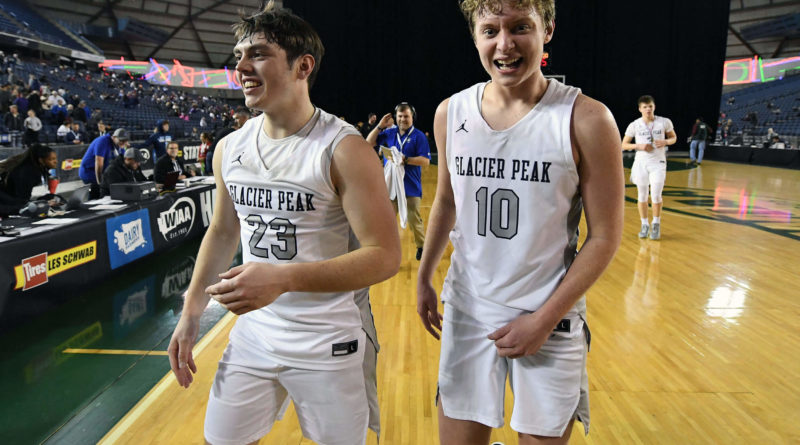 TACOMA — Union, Central Valley and Glacier Peak will advance both a girls and boys team through to Friday’s state semifinals after Thursday’s quarterfinals at the Tacoma Dome

The 3A boys games took place in the morning, 4A in the afternoon.

Here is a breakdown of each boys quarterfinal game, statistical leaders, top highlights and photos:

UP NEXT: Garfield meets Eastside Catholic/Wilson winner in the semifinals on Friday at 3:45 p.m.

Garfield moved the ball really well, and hit its shots. The Bulldogs assisted on 22 of its 28 made baskets, and shot 46.7 percent from the field.

The senior Cincinnati commit was a load. He posted 26 points, 10 board and five assists on 11 of 18 shooting (3 of 6 from 3-point range). As Garfield built its lead in the second half, Eason did the most damage, including two high-flying dunks — one a fastbreak windmill.

Scored 17 points and pulled down 12 rebounds on 6 of 13 shooting. Six of his rebounds came on the offensive end. And while the team’s leading scorer, Cameron Stordahl, had an off shooting night (1-11 from deep), Kalab’s contributions were steady.

Eastside Catholic utilized it size to win the rebound battle (36 versus 23 team rebounds) and moved the ball well, assisting on 18 of its 21 made field goals. Inside 12 feet, the Crusaders was dominant. That’s where Tuimoloau did the bulk of his work.

Has the nation’s top defensive lineman in the class of 2021 had a more efficient outing? Tuimoloau scored a game-high 25 points on a wildly efficient 11 of 13 shooting, 2 of 2 from 3-point range and six boards.

UP NEXT: Rainier Beach takes on O’Dea in the 3A semifinals Friday at 5:30 p.m.

Rainier Beach wan’t going to win the battle on the glass — not against a Kamiakin team that has several athlete 6-foot-6 and over on the floor at any given time. But the young Vikings played strong team defense, and it showed late, as Beach whittled away at Kamiakin’s six-point lead in the fourth quarter to go up two with 4:25 left. Kamiakin had a chance to win it in the final minute, but after Messiah Jones scooped up a miss under the basket, Yahye Osman swatted away his shot attempt, and forced a shot clock violation with 36.4 seconds left.

The big man scored 17 point and pulled down 14 boards against an undersized Beach.

UP NEXT: O’Dea plays the winner of Rainier Beach/Kamiakin in the semifinals on Friday at 5:30 p.m.

Not often does Paolo Banchero, arguably the nation’s top 2021 prospect, get held to two point on two shots in a half. When it happened Thursday, after Seattle Prep denied him him the ball with multiple bodies, plugged up driving lanes and “sending help, having two or three guys everywhere I went,” Banchero knew he had to try something different in the second half. So he let the game come to him.

“I knew I was going to have to, you know, maybe not get my first couple buckets off the ball,” Banchero said. “Cutting, offensive rebounds, I got myself in a rhythm, we continued to move the ball around, which opened it up for me, getting the defense moving, not letting them load up in their spots. Ball movement was, I think, the biggest thing we did in the second half that pushed our lead up.”

Player of the game

Banchero scored 23 of his 25 points in the second half and overtime, finishing 8 of 14 from the field and 9 of 9 from the free throw line. He also added a game-high 15 rebounds and chipped in four assists.

The sophomore’s hot shooting continued into the quarterfinals. He went 6 of 11 to post a team-high 16 points.

Said Banchero: “Yesterday he balled out. Today he balled out. First time we played them he shot 4 for 18 or 4 for 17, we knew coming in that it wasn’t going to be that, so we had to prepare for him. And he killed us most of the game and kept us on our toes.”

The better question may be: how did Central Valley hang on and win this game? After nursing as much as a 16-point lead into the second half, Skyview erased it with just over two minutes left. Central Valley had an opposite baseline inbound with seconds left, and turned the ball over twice in a row, giving the Storm a final look at a game-winner down one. But Skyview’s final inbound play looked familiar to the Bears. “they ran a (play) that we run, and I think the kids kind of recognized it right away,” CV coach Mike Laws said. Kyle Gruhler’s contested 3 at the buzzer fell short.

Finished with a team-high 17 points as one of three CV players with 16 or more. Simmons added five boards and three assists.

UP NEXT: Union takes on Central Valley in the semifinals on Friday at 7:15 p.m.; Olympia drops to a 4th place playoff against Skyview.

Union limited Washington commit Jackson Grant to 10 point and seven boards on 4 of 11 shooting — 0 of 4 from deep. The Bears found their scoring elsewhere, as Kai Johnson had 15 point and Ethan Gahm added 15, and shot pretty well as a team. But free throw is where the Titans took advantage. As a team, they made 19 of 24 free throw opposite Olympia’s 6 of 11, and while WIBCA’s Mr. Basketball Tanner Toolson had a below average night shooting, he made it up from the line (8 of 10).

It’s hard to cut into a team’s lead when it has a player shooting like Kaden Horn did on Thursday. The junior had 22 points, nine rebounds, hit 5 of Union’s 10 3-pointer (in the first half) and shot 6 of 10 from the field.

Scored 15 points and was aggressive taking it to the rim. Also pulled down five boards.

Mount Si wasted no time building a lead. The Wildcats blitzed Federal Way from the tip, outscoring the Eagles 21-10 in the first quarter alone. Federal Way struggled with Mount Si’s length — especially in the backcourt — and the Wildcats, who shot 59.5 percent from the field as a team. 52 of Mount Si’s point came from Jabe Mullins, Tyler Patterson and Hayden Curtis.

What didn’t the Saint Mary’s commit do? He posted a game-high 26 points, eight boards and eight assists on 10 of 18 shooting.

No Eagle scored in double digits, but Williams, the team’s most experienced player and stalwart point guard, scored eight points, dished out six assists and got to the line more than anybody else on both teams (5 of 7).

UP NEXT: Glacier Peak gets Mount Si in the 4A semifinals Friday at 9 p.m.; Loser drops to a fourth place game against Federal Way on Friday at 2 p.m.

Glacier Peak’s defense usually does the talking, and Thursday night wasn’t an exception. But the Grizzlies’ outside shooting also made an enormous impact. The Grizzlies hit 12 3-pointers — three apiece from Tucker Molina and Tristan Bates.

Combined for 31 points and shot a collective 11 for 23 from the field.

“I love the way that our guys talk to each other and get each other going, and you need that in a game like tonight when the first quarter was not pretty. People probably sat in the stands and though ‘what the heck,’ how can those guys win one game, let along 24?’ But our guys were resilient in the way they stuck together. They stuck with what’s gotten us to this point. We’re just a team. We don’t have unbelievable Jabe Mullins maybe, Tanner Toolson. But we’ve got some good basketball players that play well together, and I think that’s what high school is all about.”