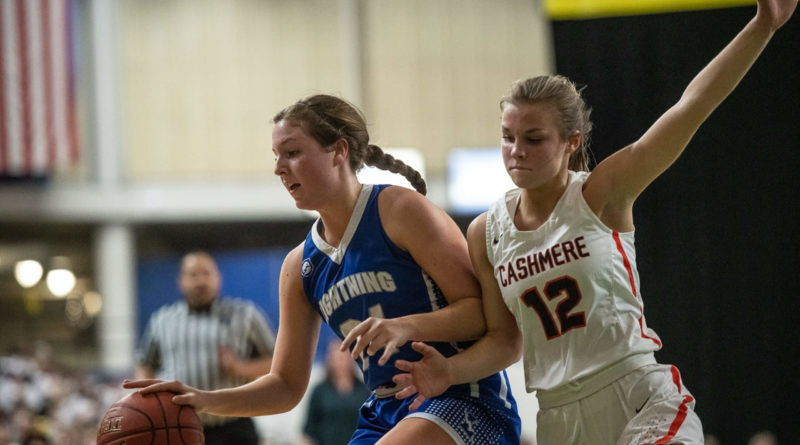 YAKIMA — The stage is set for the 1A and 2A Washington high school girls basketball tournaments, which take place on Friday afternoon and evening at the SunDome.

First, catch up on Thursday: All the quarterfinal action of eight games, with highlights, and players of the game.

The West Valley of Spokane Eagles sure have a flair for the dramatic – especially the past couple of days.

And on Friday, it was standout guard Hailey Marlow’s turn to send her team into a frenzy.

Marlow’s step-back 3-pointer at the buzzer lifted the Eagles to their first state title game since winning it all in 1997 in the 3A ranks.

“Honestly, I think it’s that everyone doubted us getting here,” Marlow said. “And we just pulled through, and proved every single one of them wrong.

Tumwater, which led by as many as nine points in the first half, took its final lead, 40-38, on Aubrey Amandala’s two free throws with 47.3 seconds remaining.

But Jillian Taylor – the hero Thursday night with her putback basket to sink W.F. West in the quarterfinals, tied it back up at 40-40 with her jump shot 10 seconds later.

And the Eagles got the ball back with 8.2 seconds remaining, giving Marlow a chance to win it – and she did. She finished with a team-high 14 points.

It wasn’t just the game-winning shot, it was the constant pressure she kept on the Tumwater defense on the perimeter, leading her team from a deficit.

At certain times, she was the best player on the floor, helping the T-Birds build an early 8-0 lead. She had a game-high 15 points on 6-for-12 shooting.

Lockdown defense. The Lions certainly know how to play their Northwest Conference counterpart, but limiting them to 31 points was the lowest total in the three meetings (all wins). Burlington-Edison made just four field goals in the first half – and turned it over 21 times in the game.

She was beastly on the interior with a double-double – 13 points and 12 rebounds – in 23 minutes.

Since nobody scored in double figures, this was a tough choice. Maskell did hit a pair of 3-pointers, and have eight points and five rebounds.

UP NEXT: Lynden plays West Valley-Spokane for the 2A girls title Saturday at 5 p.m.

A different kind of defense. Right now, the Lyncs are putting the clamps on opponents as well as any team in 1A – and possibly the state. And against Freeman’s formidable front line, led by 6-foot-2 junior Jordyn Goldsmith, Lynden Christian eliminated all working space in the paint.

Freeman was forced into 23 turnovers, and shot just 30 percent from the floor.

Now, the Lyncs have stamped their much-anticipated showdown with Hailey Van Lith and Cashmere. Lynden Christian defeated the Bulldogs in 2018 for the 1A title.

“It is a game we were hoping to play,” Lynden Christian girls coach Brady Bomber said. “I am sure they are, too.”

She does it all for the Lyncs, and led them in scoring with 13 points, four rebounds and three assists.

The ninth grader did have her moments inside for the Scotties, scoring nine points on 4-for-5 shooting.

UP NEXT: Lynden Christian plays Cashmere for the 1A girls title Saturday at 9 p.m.