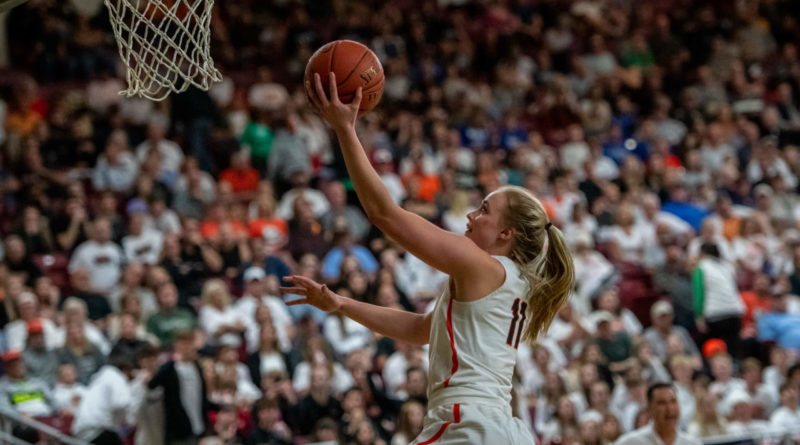 YAKIMA – On the first day of the rest of their state-tournament lives together, the Cashmere High School Bulldogs spent the afternoon at the downtown rotary club accepting an award.

Bulldogs coach Brent Darnell could sense his players, including star point guard and Louisville signee, were a “little overexcited and energetic.”

And come Thursday night, they took that super-power energy and took unorthodox-playing Annie Wright out of the Class 1A championship bracket.

Led by Van Lith’s game-high 23 points, the Cashmere beat the Gators, 68-31, in front of a packed house at the SunDome.

Riley Johnson and Grace Hammond, who both sank 3-pointers, added 13 points apiece as the Bulldogs got their quest for a first state championship underway.

“Sometimes waiting around all day, you get anxious,” said Van Lith, who sat much of the fourth quarter after the game went into a running-clock mercy rule. “But we are focused right now. We have one goal, and that is all we care about.”

It was an interesting chess match or sorts, as both teams chose to double- and triple-team the opposing star – Van Lith and Annie Wright’s Julianna Walker, the state’s leading scorer.

Van Lith wasn’t scoring much early, but closed the first half with a fury, getting in the lane twice for baskets, and was fouled. And she drilled a straightaway 3-pointer with 23 seconds remaining to give Cashmere a 39-17 lead.

Walker, on the other hand, struggled all night. Cashmere sent two taller players at her for double-teams in Grace Erdmann and Johnson. Sometimes, it was Hammond by herself. And Van Lith guarded her solo – and also came late as the second defender in.a double team.

“We did a good job of crowding her, not letting her get those quick 3s, and making her put it on the floor,” Darnell said. “We were taking a lot of turns on her.”

With the game well in hand, Van Lith showed a little flair with a behind-the-back pass to Peyton Brown for an easy bucket, bringing the crowd to its feet.

“I was just feeling saucy,” Van Lith said. “Sometimes things just happen, and I do them out of instinct.”