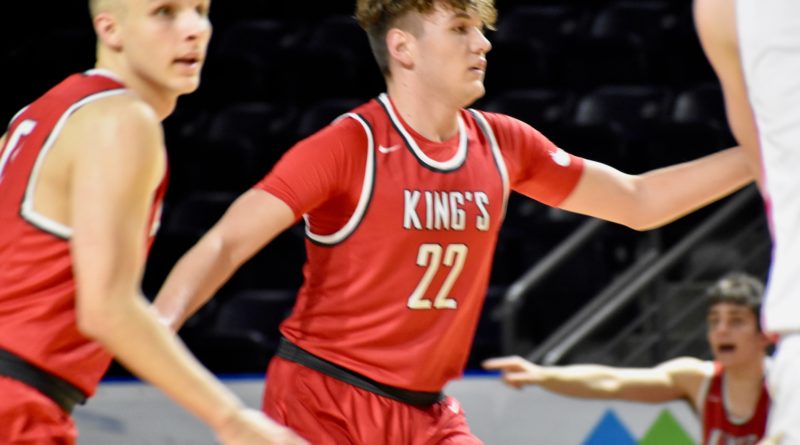 The 6-foot-7 teenager said he came into last summer weighing 235 pounds. His goal was to trim a good portion of that.

So around 8 a.m. every day, he went to the high school track at King’s, or found a nearby park and began “working the leaders, doing sprints and flipping tires.”

His goal was to get down to 200 pounds, but readjusted when he dropped to 203, “I was a little too skinny.”

At the Class 1A state tournament this week, he is at a comfortable 210.

“I feel a lot better. It shows,” Linhardt said. “I am more agile, and I am getting by people, and playing defense.”

With their 2A quarterfinal win in hand against Ellensburg, the Lions emptied their bench in the final minutes.

Which drew a lot of smiles and cheer from the bench.

Ashtyn Van Dalen got into the game, which was a goal by the starters coming into the day.

Van Dalen, a special-needs student, was the team manager last season. But heading into her final year, she was asked by the players and longtime coach Rob Adams to become a full-time varsity member.

She played all summer with the Lions. Adams estimates she got into 18 varsity games – and played more than a minute in her first state-tournament game Thursday, missing a shot from the floor.

“It’s been a blessing, really,” Adams said. “With all the expectations and the glamour and glitz of chasing the gold ball … this has been cool to see how our kids have evolved.”

DON’T WE KNOW YOU, BUDDY?

Of the 16 quarterfinal games playing in the SunDome on Thursday, one featured a clash of league rivals – Lynden Christian and Meridian boys.

Trailing early, the Lyncs rallied to grab a 62-53 victory over Meridian.

“We don’t like playing any familiar opponent,” Lynden Christian boys coach Roger DeBoer said. “It showed last year when we play King’s a second time in three weeks (losing in the 1A quarterfinals). Familiarity creates a different type of vibe.”

“It’s kind of fun to play them,” Sipma said.

2A STAR OF YESTERYEAR BACK IN THE SUNDOME

Luke Ridnour, the former Blaine star point guard who led the Borderites to back-to-back 2A state championships in 1999 (defeated Clarkston in the finals) and 2000 (defeated Wapato in the finals), was back with his family at the SunDome this week.

The retired NBA 13-year player has his own family now – and his children attend Lynden Christian schools.

And many of the top high school players in Lynden train at his facility – the Ridnour Athletic Complex.