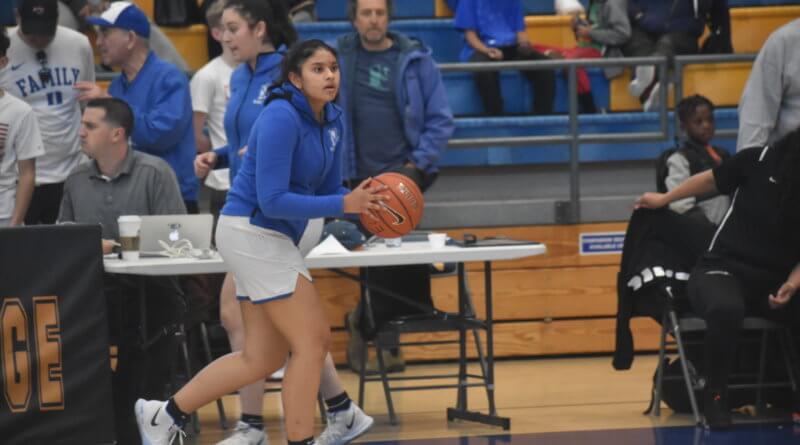 The 1A boys games take place in the morning, 2A in the afternoon.

UP NEXT: King’s plays Seattle Academy at 3:45 p.m. Friday in the semifinals; River View drops to a consolation playoff at 9 a.m. Friday.

On Wednesday, the Knights shot nearly 45 percent from the floor – and defeated defending 1A champion Zillah.

On Thursday, they shot at a 55-percent clip.

All in 9 a.m. state tournament games in the SunDome.

‘We talk about bio-rhythms, and getting their bodies ready,” King’s boys coach Rick Skeen said. “For four straight days, they have been out there competing and crackling.”

Tyler Linhardt was particularly scorching with a game-high 26 points – 23 coming in the first half.

But he picked up a technical foul after his alley-oop dunk late in the first half – and did not play much thereafter. Some of that had to do with the Knights’ big lead. The other reason was Skeen was going to take no chances in his sophomore picking up another technical foul – and missing the state semifinals.

The 6-foot-7 sophomore was simply unstoppable, showcasing a wide array of moves – and shooting range.

He was the only player in double figures – 12 points – and showed some shake-and-bake movement on the perimeter.

UP NEXT: Seattle Academy plays King’s at 3:45 p.m. Friday in the semifinals; King’ Way Christian drops to a consolation playoff at 9 a.m. Friday.

Second-chance points. Seattle Academy outrebounded the Knights, 31-21, and outscored them, 16-0, because of it. It also helps when you shoot 60 percent in a half – and the Cardinals did in beating the reigning 1A state runner-up.

One of 1A’s best point guards scored a game-high 23 points, including three 3-pointers. He added seven assists and seven rebounds.

He scored a team-high 19 points on just nine field goals (he was 8-for-8 from the free throw line). He made three 3-pointers.

UP NEXT: La Salle plays Lynden Christian at 5:30 p.m. Friday in the semifinals; Cashmere drops to a consolation playoff at 10:30 a.m. Friday.

Nothing more than grit. The Bulldogs buried La Salle, 72-50, in early February, and was heavily-favored in this matchup. But Desmond Judd’s three-point play to end the first quarter not only gave La Salle a 13-7 lead, it gave the team belief. The Lightning would go on to lead by as many as 15 points late in the third quarter

He scored a team-high 15 points on 7-for-17 shooting, getting to the basket and making jump shots

He led all scorers with 16 points, adding six rebounds before fouling out in the fourth quarter.

UP NEXT: Lynden Christian plays La Salle at 5:30 p.m. Friday in the semifinals; Meridian drops to a consolation playoff at 10:30 a.m. Friday.

Not panicking. The Trojans jumped out to a 10-3 lead in the first 3:48, extended it to nine points midway through second quarter. But Andrew Hommes scored three field goals in the final 1:57 of the first half, including a layup with seven seconds to go, that tied the game at 27-27. The Lyncs scored the first basket of the second half, and never trailed again.

The team’s big man, and star football player, poured in 17 points on 7-for-10 shooting

He led his team with 16 points and five rebounds, drilling three 3-pointers.

UP NEXT: North Kitsap plays Lynden at 7:15 p.m. Friday in the semifinals; White River drops to a consolation playoff at 12:15 p.m. Friday.

Waking up. And waking up is exactly what the Vikings did in the second half, erasing a 13-point deficit with a vengeance. North Kitsap shot a blistering 76 percent from the floor, making 22 of 29 field goal attempts in quickly turning this game into a rout.

Like the rest of his teammates, the sharp-shooting wing player came alive after halftime, tallying 24 of his 26 points in the second half.

He was a big part of the Hornets’ early onslaught, making a team-best three 3-pointers, finishing with 12 points and 10 rebounds.

UP NEXT: Lynden plays North Kitsap at 7:15 p.m. Friday in the semifinals; Toppenish drops to a consolation playoff at 12:15 p.m. Friday.

Well, height. And the Lions took advantage of the smaller Wildcats, outrebounding them, 40-14. Liam Hanenburg’s dunk was the highlight of Lynden’s 6-0 run that gave them the lead for good as the Lions totaled 14 points in the paint in the second quarter alone.

He scored a game-high 21 points on 8-for-12 shooting, and added three assists and three rebounds.

The guard made half of Toppenish’s four 3-pointers, finishing with 16 points before fouling out.

UP NEXT: Lindbergh plays Clarkston/Black Hills winner at 9 p.m. Friday in the semifinals; Toppenish drops to a consolation playoff at 2 p.m. Friday.

One fantastic defensive stop to reach the semifinals for the first time since 2012. After forcing a turnover, Tumwater had a chance to tie with three seconds to go. But Peyton Peterson was trapped along the sideline by a swarming Xavier Bailey. In mid-air, Peterson redirected a would-be-shot-attempt back to a teammate, and the T-Birds were stymied at the buzzer.

Besides coming up with the game-saving defensive play, Bailey led the Eagles with 17 points on 6-for-13 shooting.

UP NEXT: Clarkston plays Lindbergh at 9 p.m. Friday in the semifinals; Black Hills drops to a consolation playoff at 2 p.m. Friday.

The plays adding up to ‘3.’ In a tight game in the fourth quarter, the Bantams cashed in on three of those – two 3-pointers by Trey Dreadfulwater (off steals and passes by Christian Robbins), and a three-point play by Tru Allen. Dreadfulwater’s second one gave Clarkston a 47-36 lead with 4:12 to go.

The Bantams’ stocky guard was efficient with 18 points on 7-for-11 shooting. He buried two fourth-quarter 3-pointers in a key run.

In a balanced effort, his 12 points were the Wolves’ best, as were his two 3-pointers.