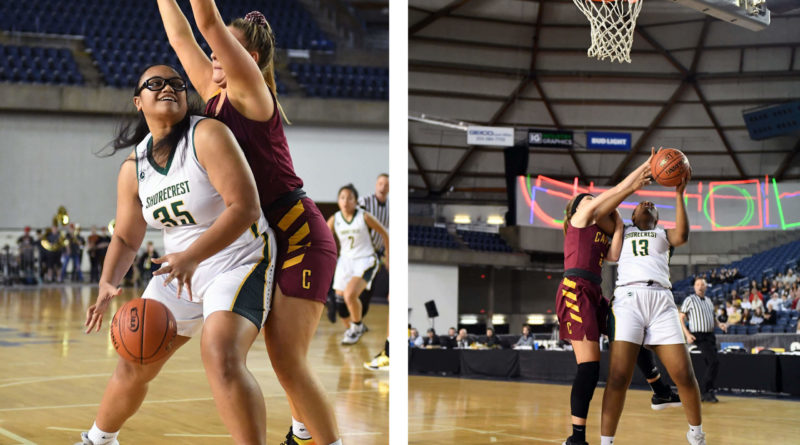 It is pretty obvious that the return of guard Sahcari Davis has given Garfield a good third scoring option behind McDonald’s All-American Dalayah Daniels and Meghan Fiso. And with Fiso in early foul trouble, Davis delivered a season-high 19 points. She capped a 6-0 run midway through the third quarter with her bucket, then ended the quarter with a layup with five seconds remaining that gave the Bulldogs a 42-31 lead.

Right now, she is the Bulldogs’ top ball-handler – and added a team-high 19 points (7-for-13 shooting) against Kennewick, to go along with seven rebounds.

After a dismal start, Gebers rallied to lead the Lions with her game-high 20 points and eight rebounds. She made a pair of second-half 3-pointers.

Molly Moffitt’s energy. Doesn’t it always for the Panthers? She scored six huge points in the fourth quarter, including a putback basket with 2:34 to go, and then another layup after a Seattle Prep timeout 45 seconds later that gave the Metro League school a 39-36 lead. The Panthers held Lincoln scoreless in the final 2:06.

The junior poured in a game-high 22 points (on 9-for-18 shooting), including six of the team’s 13-fourth quarter points. She added five rebounds and thre steals.

She didn’t touch the ball as much as many thought she would, but the Abes’ post player still finished with a team-high 12 points, four rebounds and four blocked shots.

“We got as many shots up as we could the last few days, and it is just fun,” Lake Washington girls coach Jeff Wilson said. “The girls came ready to play.”

It could have easily gone to Liesse, who was on point as the Kangaroos closed the first half on an 8-0 run to break a 20-20 tie. But Pederson carried the offense in the second half, dialing it up from long range.

Let’s be clear – nobody on this team shot the ball well in the school’s first trip to the Tacoma Dome since 2007. But Ballard had a team-high 13 points, nine rebounds and five steals.

The Scots’ defense. It was everywhere – with players getting out to Capital shooters. Shorecrest held the Cougars to just four first-half field goals (which Amanda Lee made in the first five minutes of the game for the Scots). It was a nice bounce-back performance after back-to-back losses to Arlington (Northwest District title game) and Mount Spokane (regional game).

The 5-foot-10 guard scored eight points in the first 5:09 to get the Scots rolling early, then drilled an exclamation-point 3-pointer from the top of the arc to close out the first half in an efficient performance.

In her final game, the senior forward led all players with 14 points and nine rebounds in a losing effort.

In a name – Aaliyah Collins. With the Grizzlies trailing by 13 points to start the second quarter, Collins finally got her team’s transition game going. And they needed it with junior Maya Erling in foul trouble. Her defensive pressure and passing was key in wiping out the big deficit.

Shaylin Sande’s three-point play at the 5:48 mark of the third quarter triggered a 9-0 Glacier Peak run to grab a 40-29 lead – and the Grizzlies held on from there.

“We learned (from the Central Valley regional loss), we have to stay a little more positive, take care of the ball and play stronger,” Glacier Peak girls coach Brian Hill said.

If it wasn’t for Aaliyah Collins’ effort (13 points, seven rebounds, five steals), particularly in the second quarter, the Grizzlies might not have survived.

Bergstrom showed why she is one of the upcoming post players in the state with 16 points, eight rebounds and three blocked shots.

Beamer’s intensity from the get-go. Titans coach Corey Alexander said the team had its best week of practice all season – and that showed up against a veteran Bellarmine Prep group that reached the state semifinals a year ago. They had the Lions in foul trouble all game long, and it paid off at the free-throw line (19 of 25) as Beamer built an 18-point lead heading into the fourth quarter.

“We have five girls you have to play defense on,” Corey Alexander. “It is hard, especially at this level.”

Alexander did it all with 19 points, nine rebounds and was 8-of-9 from the free throw line. Her combination of size and strength was a difficult matchup for the Lions’ small guards.

In her final game, the Notre Dame golf signee played 30 minutes, tallying 16 points on 8-for-18 shooting from the floor. It wasn’t her best shooting night, but the Lions struggled to shoot the ball all game long.

Well, other than Kentridge star and USC signee Jordyn Jenkins sitting on the bench in a full knee cast? It was the Eagles winning the battle of transition game – especially in the second half. They forced four Kentridge turnovers in the third quarter, and outscored the Chargers, 18-6. Shea Dillon and Keira Hanson hit big 3-pointers during that scoring outbreak.

“We came into the game pretty prepared (for Kentridge’s transition game),” Issaquah guard Alivia Stephens said. “We realized they had some really good and fast players, but we were able to get back and do what we needed to do.”

Katie Macnary (10 points, 10 rebounds) was probably the most reliable contributor, from start to finish. But Stephens sparked the second-half surge, scoring 11 of her team-high 14 points

Lam (team-high 14 points, nine rebounds) did the most damage attacking the rim in the paint, and equaled the scoring output of standouts Kiernen Denckla (10 points) and Daylani Ballena (four points).

Moses Lake’s balance. The Chiefs’ guard duo of Madisyn Clark (team-high 16 points) and Anna Olson (15 points) dominated with efficiency and timely big plays as the Chiefs led by double digits for most of the second half. And on the defensive end, the 4A CBBN champions wanted to limit all other contributors, giving Rams’ senior Raigan Barrett (game-high 26 points) the green light to shoot at will. The next highest scorer for Rogers was Allyson Pettit with six points.

“She (Barrett) had the state record for â€¦ shots, so we told Anna, who was the primary mark, â€˜She is going to shoot, and understand she is really good and she is going to make sone, so donâ€™t get in your own head with that kind of stuff,'” Moses Lake girls coach Matt Strophy said.

She in a reliable two-way performer, and Olson (15 points on 5-for-9 shooting) got the Chiefs going in the first half, including her buzzer-beater at the end of the opening quarter when she hauled in a length-of-the-court pass, and scored on a layup.

What can you say, some players were born to score – and Barrett is just that. She went over the 2,000-point mark for her career in the fourth quarter, and was the team’s only offensive pulse in this 4A opener.