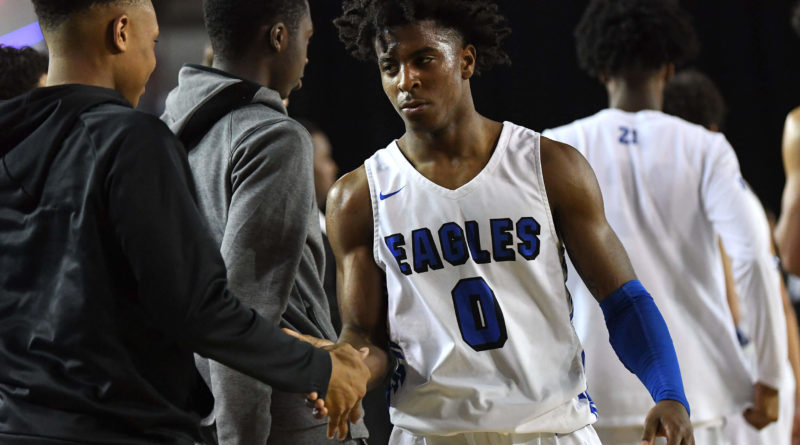 Size and rebounding. Marysville-Pilchuck owned a 35-22 advantage on the glass, including 12 offensive boards to set up second-chance points. That made it particularly difficult for Central Kitsap to slow M-P’s run in the third quarter, and it made life difficult for crafty CK guard Colby White, who utilized a mix of screens and will to get open. But those chances were hard to come by, and M-P turned an eight-point halftime lead into a 20-point game early in the fourth.

The senior scored 11 of his game-high 25 points in the third quarter to build a lead that reached 20 early in the fourth, including a pair of back-to-back 3s in the left corner, to give Pilchuck a 15-point lead. He also grabbed six rebounds and finished shooting 9 of 18 from the field.

Finished with a team-high 17 points on 7 of 12 shooting. He hit a tough contested step-back 3 with two minutes left, but at that point, Maryville-Pilchuck had complete control.

“(White’s) so quick around the corners, lots of screens for him,” Stordahl said. “Our big guys are really good on-ball defenders, and he’s just able to get around and hit step-backs, it’s just shots he’s going to hit.”

In order for Marysville-Getchell to contend, senior standout guard Malakhi Knight was going to have to have a big game. He did, scoring 29 points, and still Wilson was able to deploy balanced scoring and a strong shooting performance (50 percent from the field). The Rams held the Chargers to 34.5 percent shooting in the game, including 18.5 percent in the first half (Wilson outscored them 23-8 in the second quarter) as as Wilson built its insurmountable lead.

Dorsey scored 12 points as one of three Rams in double-figures and also pulled down nine boards and two steals. And he did so shooting 6 of 9 from the field.

Knight, a 6-foot-4 guard, was a load. It’s no overstatement that if the Oregon State baseball commit wanted to play college basketball, he’d have no trouble finding a home at the next level. In the Chargers’ season-ending loss, he poured on 29 points on 11 of 24 shooting, hit four 3s, was 3 of 3 from the free throw line and had three steals. but he struggled from. the field as Wilson made an effort to face guard him with several different bodies.

Evergreen led by one at halftime, then Rainier Beach held the Plainsmen to three points in the third quarter on 29.6 percent shooting, 13.3 percent from 3-point range. Carter Monda long two with around 3:38 left in the fourth cut the Beach lead, which reached double digits, to five. Beach rebuilt its lead, behind forced turnovers (Evergreen had 15), but the Plainsmen tried to claw back in the final minute. Monda had a put-back with about 15 seconds left, but Beach held on.

Scored 16 points on 7 of 13 shooting and logged three steals to lead Beach in scoring. Atkins’ offense helped the Vikings stave Evergreen’s late attempts to cut into the lead.

Logged 19 points on 7 of 14 shooting, a team-high for the Plainsmen. Also had two assists and was 4 of 4 from the free throw line.

“We just knew in order have success against them, we were really going to have to lock in defensively. They’re a really good team and Tyson (Degenhart), I mean, he’s as good as they come in Washington high school basketball and coach does a really nice job. Maybe part of it was we were so locked in defensively that their mind was a little more free to shoot it on offense.”

“to be out after one is really disappointing after last weekend. I feel bad for the kids. They really worked to be here.” (Mt. Spokane took top-seeded Eastside Catholic to overtime last weekend)

“We knew they could really shoot the ball, but in eight games of film, that was unquestionably the best shooting performance they’ve had. So, kudos to them. They’re a good team, they’re really well coached and they were clearly the better team today.”

Scored 28 points on 9 of 15 shooting and pulled down seven boards to lead the Wildcats.

Skyview limited West Valley to just 12 points in the first half â€” four alone in the second quarter â€” and the Rams didn’t hit a 3 all night (0 for 12).

Chatman hit four of his team’s seven 3-pointers and posted a game-high 22 points.

“This group was so unselfish and so supportive of one another, that’s what made the end hard. Not losing, not getting beat, not underperforming â€” which some teams, when you underperform, that’s what it’s all about â€” but with this group, of all the groups I’ve had, there were not problems, no finger-pointing all season, parents were supportive, school was supportive. It’s very unusual you experience that, so when the journey comes to an end, you feel for the kids because it’s the last time we’re together.”

After a below-average first half of shooting (29.2 percent), Olympia shot the ball significantly better as a team in the second half (57.9 percent) and it payed off. The Bears flipped a five-point halftime deficit into a second half lead, and found ways to score outside of center Jackson Grant, a Washington commit. Three players â€” Ethan Gahm (14 points), Grant (13) and Kai Johnson (11) â€” scored in double figures.

The 6-foot-10 center is a matchup nightmare, but Auburn was successful in neutralizing him by collapsing multiple defenders down low â€” at times. Grant still made an impact, scoring 13 points and pulling down 13 boards, four on the offensive end.

Blassingame is one of several pieces of proof that Auburn will be here to stay for years to come. The sophomore wing posted 15 points and 10 boards, including three 3-pointers.

Shooting percentage. Federal Way shot a lights-out 12 of 23 from 3-point range and 57 percent from the field overall. Battle Ground and its duo of sharp-shooting guards Nate Millspaugh and Brendan Beall shot 3 of 15 from deep. It helped Federal Way outscore the Tigers 48-22 in the second and third quarters combined to lead by as many as 29 points.

Scored 18 points on 6 of 11 shooting and 3 of 6 from behind the 3-point line to lead Federal Way. Also dished out four assists.

“It felt great. People don’t see me as a shooter, but I’ve been working on it myself,” Williams said.

Scored 26 points, nabbed 16 boards and went 8 of 11 from the free throw line â€” all in front of his future coaches in Gonzaga head coach Mark Few and assistant coach Brian Michaelson, who were courtside.

Wednesday night’s last-minute win was the first state tournament win since 1971. Head coach Jake Johnson jumped up on the media table. Players ran around aimlessly, jumped into each other’s arms and one even climbed a rail and jumped into the student section. It was a celebration 49 years in the making.

Sumner’s Josh Lear hit the go-ahead corner 3-pointer on a catch-and-shoot from a baseline inbound with 18.7 seconds left. With 1.5 seconds left, Gonzaga Prep’s Liam Lloyd pump-faked, caught two defenders in the air, and got off a clean look at a game-winning 3, but it fell short.

Sumner keyed in on Gonzaga Prep standout Liam Lloyd, who struggled from the field. He finished 2 of 7 in the first half â€” 1 of 6 from 3-point range and ended up with 12 points on 33 percent shooting. To Lloyd’s credit, he finished a remarkable postseason run, and affected the game in different ways (seven assists, six boards).

Campbell had 22 points on 9 of 14 shooting, including 10 in the second half. Lear led all scorers in the first half with 15, then didn’t hit a shot â€” until he hit the shot.

The big man had a team-high 18 points, eight rebounds and made 8 of 12 field goal attempts.

After winning the program’s first state game in 49 years, he had this to say to his team: “Are you satisfied now that youâ€™re at the Dome for the first time ever, are you satisfied with that? Or are we going to go to the dome and make some noise? You have a choice to make. And they were all committed to â€˜letâ€™s go to the dome, do what we do, and make some noise.â€™ “