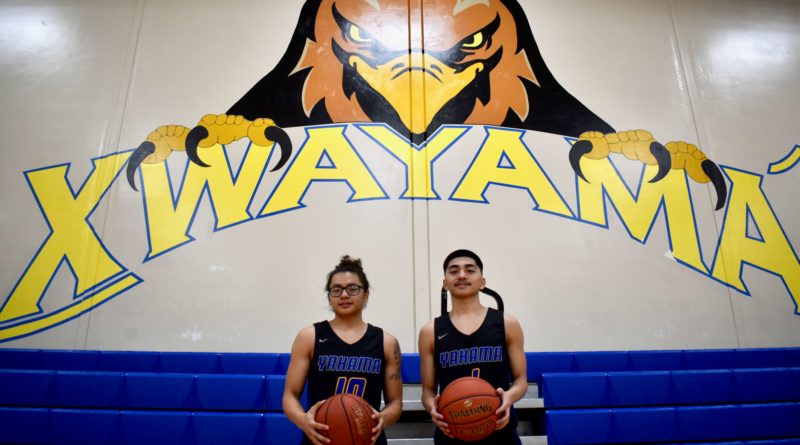 Editor’s note: This is the first of a five-part series on what Scorebook Live has selected as the Washington high school boys basketball story of the year this season. The B subject is the Yakama Tribal Eagles.

TOPPENISH — Bryan Strom could see the seemingly endless rows of attendees, the bright lights and the thunderous noise, and though every part of his warmup maintained a normal cadence, admittedly, the moment began to hit him.

Strom, Yakama Tribal’s fifth-year point guard, had grown up playing club basketball, and figured when it came to big games, he’d seen it all. That no stage, not even the Spokane Arena, would faze him.

“I’ve played in many championships my whole life,’ but the state championship is different,” Strom said. “I did get butterflies when they first announced the names. It was a different feeling than just the championship.”

For Strom, it was a stage no one in his family of accomplished basketball players had played. The 1B state championship game was also, for a group of young men and a small, tight-knit school of 145 students, a way of representing their Yakama Nation community of around 14,000 (8,870 enrolled, per the Northwest Portland Area Indian Health Board) on a statewide platform.

And after they lost to powerhouse Sunnyside Christian, 54-45, the team, much of whom would return this season, was determined to make history.

“It’s honestly a tradition around here, not just at the school, but on this reservation,” senior Bryce Strom said. “Everybody loves the game of basketball. Everybody’s surrounded by it.”

Basketball runs deep in Yakama Nation, but especially so in the Strom family.

Bryan Strom, a 5-foot-7 point guard, played for Yakama Tribal as an eighth grader on a team that made the state tournament. On the team was his older brother, Isaiah Strom, the team’s leading scorer, and his cousin, Justin Strom. They were coached by Adam Strom, who is now the head girls basketball coach at Yakima Valley College. All, including Bryce and Bryan, who are both seniors, are 1,000-point career scorers, as was their cousin Savannah Strom at La Salle and several second cousins.

“It’s honestly a tradition around here, not just at the school, but on this reservation. Everybody loves the game of basketball. Everybody’s surrounded by it.”

Bryan’s father was Yakama Tribal’s boys coach until handing the job to his brother Greg Strom in 2016. Growing up, Adam Strom was a pass-first guard, and has been surprised to see so many pure scorers flourish. But his sons always grew up around basketball, especially Bryan, who was always drawn to coaching.

“A lot of 6 a.m. workouts, late evenings in the gym, I think they really learned the scoring piece of the game watching from the sidelines as I coached,” Adam Strom, who is also Yakama Tribal’s athletic director, said. “They wanted to replicate whoever the area all-star was.”

For much of his eighth grade season, Bryan felt like he was just along for the ride. During that 2016 run when Bryan was an eighth grader, he went from JV swing player to a starting role. He still remembers the complete shock when he saw his name in the starting lineup.

Placing fifth at state after losing in the 1B state semifinals to Almira Coulee Hartline, 46-41, gave him a taste of a stage he was determined to one day conquer.

But as his high school career wore on, he wondered if Yakama Tribal was starting to feel too small. He was drawn by the allure of playing on a bigger stage, a higher level of high school basketball. Should he move to Zillah, he wondered, and play with his good friends in the neighboring city? Or move to Wapato, where he grew up?

He considered it all in the middle of his junior season. In his mind, the story wrote itself.

“I was like, ‘maybe I can leave, maybe we’ll win a state championship,’ and then I could go play at a higher level at a different school and see how I do,” Bryan Strom, who averaged around 19 points per game as a junior, said. “Then we didn’t win, I took second and I was like, ‘no, I’m going to stay here, I’m going to finish my time here and finish the unfinished business we were looking for.”

A little more than a month after state, his fortunes took a nosedive when he tore his ACL and meniscus in a club basketball game. Doctors advised him to sit out nine months to a year. He was determined to come back and play, even if it meant playing the latter half of the season at less than 100 percent strength.

His brother, Bryce Strom, has stepped up since. He leads the team in scoring, has averaged more than 25 points per game throughout the postseason, with quickness and blow-by speed that requires defenders to sag off, and an outside shot that keeps them honest. Mylo Jones has filled a secondary scoring role as a junior, and sophomore forward Justice Hart lead the team in rebounds.

“Other players on the team just had to step up,” Bryce Strom said. “Because mostly it was me and him last year doing a lot of the scoring. But we’ve got a good team this year. And my boys are ready.”

While the team was at the state tournament last March, Yakama Nation’s community movie theater hosted a showing of the state championship. Community members watched the players on the theater’s big screen take on Sunnyside Christian.

“A couple members got pretty emotional just seeing the kids represent them on TV,” head coach Greg Strom, Bryan and Bryce’s uncle, said, “and that was pretty touching to hear.

“(Basketball) brings the community together. It’s a bonding thing.”

Bryan and Bryce Strom, who are enrolled Quinault Indian Nation and whose father Adam is enrolled Yakama Nation, keep that understanding front of mind as they trudge through the postseason, having won its three district games by an average of 47 points.

It’s what’s behind their focus entering the state tournament as the 2-seed. The school’s girls team also earned a guaranteed state berth as a 6-seed.

“We’re not just representing the 150 kids, we’re representing the whole tribe full of 11,000 people, so it’d be a huge accomplishment,” Bryan Strom said. “I know the Yakama people would be proud of us.”