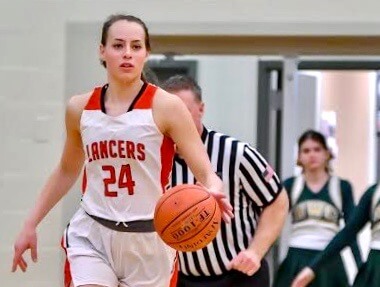 Editor’s note: This is the first of a five-part series on what Scorebook Live has selected as the Washington high school girls basketball story of the year this season. The 1B/2B subject is the Liberty of Spangle Lancers.

It barely registered on her radar two weeks ago that she became her basketball-storied family’s all-time leading scorer, surpassing what her silky-shooting father, Blaze, totaled in the 1980s for St. John-Endicott High School (2,122 points).

But the Eastern Washington University signee might make an exception to her normally cool style next week.

“The ultimate one-up on him,” Burnham said, “would be winning that state title.”

It was the first time in 39 years that a Liberty girls team had reached a state semifinal. And the runner-up showing was the school’s best state finish ever.

But all of that came as very little consolation for this group.

“That is the easiest part of coming back this season,” Lancers coach Chris Colvin said. “If we had won, of course they’d want to win it again. But it’s not the same sort of hunger that comes with getting so close, but not getting there.”

Led by Burnham, who should get close to 2,300 career points before she leaves, Liberty has four returning starters.

With that in mind, he asked his players to focus much of their offseason on improving their individual skill development.

“I’ve wanted to try and give them all more face-up opportunities to take teams off the bounce,” Colvin said.

The Lancers are currently 22-1, with their lone loss to out-of-state Timberlake, Idaho. They have wins over two reigning state champions – Tri-Cities Prep (2B) and La Salle (1A).

And they are clearly the team to beat coming into the state championships.

“I don’t know if we think about that, but we are aware of it,” Burnham said. “We are proud of (having a target). It shows how much hard work we’ve done.

“But we are only worried about one goal in the end.”