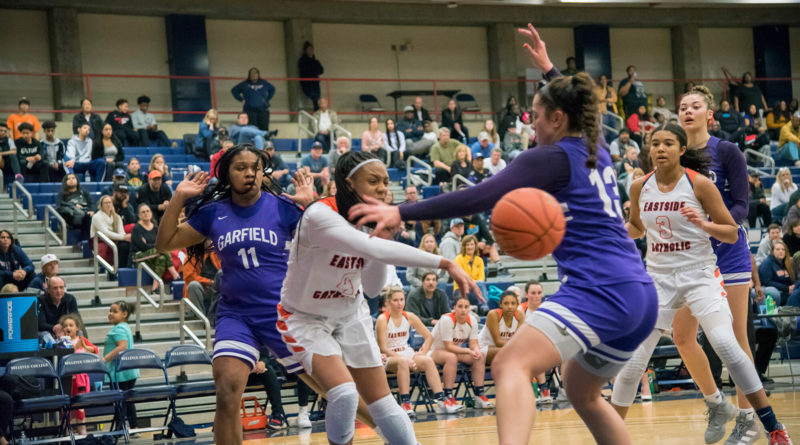 Editor’s note: This is the fourth of a five-part series on what Scorebook Live has selected as the Washington high school girls basketball story of the year this season. The 3A subject is the Eastside Catholic Crusaders.

There is a reason why the Eastside Catholic Crusaders aren’t acting off the hook about their remarkable 2019-20 season, sitting at 24-1 and as the consensus top-ranked team in the state.

It’s because they have perspective.

Yes, they have a once-in-a-generation group of ninth graders in tow, led by point guard Malia Samuels and forward Mjracle Sheppard.

They are a savvy, efficient group that applies a chaotic brand of fullcourt pressure. And off the court, they share these experiences with one another with great joy and companionship.

“There are kids playing basketball who are arrogant and have attitudes,” Eastside Catholic girls coach Katie Farr said. “These are kind kids.”

They are the bright lights after some pretty dark days involving this program.

Farr, a 2000 Bethel High School graduate, has been around coaching for a long time, especially on the AAU circuit.

She spent one grueling season at Lake Washington High School before taking a step back. She figured she was done as a head coach in the high school ranks.

But Farr reconnected with Brent Merritt, the Eastside Catholic boys coach who was a former player at the University of Washington in the early 1990s. He recommended that she take a hard look at the Crusaders’ girls vacancy back in 2017.

“I didn’t know what I was walking into at all,” Farr said.

But she kept one close ally on board – Shaun Samuels, who had been an assistant under former Eastside Catholic girls coach Kwan Johnson.

A popular disc jockey in Seattle, Samuels had founded the Northwest Greyhounds AAU program where this up-and-coming group of girls (including his daughter, Malia) were all playing together.

But that first season together in 2017-18, the Crusaders went 0-18 and finished last in the Metro League. Half of their losses were by 25 or more points.

“We had to realize how to be good coaches for girls who kept showing up every day,” Farr said.

After last season’s 5-14 campaign, the Crusaders finally got to welcome in their talented class-of-2023 players in June. They played in the Kentwood tournament – and won it.

Bigger things were on the horizon.

Qualifying for the worldwide Jr. NBA Global Championship in Orlando, Florida, the Under-17 Northwest Greyhounds advanced all the way to the tournament semifinals. Malia Samuels was the floor leader on that team.

“They lost just one game all summer,” Farr said. “And Malia was seasoned playing against juniors and seniors.”

There was a different vibe immediately during tryouts last November. Even one of the returning players felt it.

“We were very close and hung out all the time,” Eastside Catholic sophomore Eliyah Givens said. “It’s made playing a lot more fun.”

Before the season, the team held a weekend retreat in Oak Harbor. They played games. They went out on adventures. And they wrote team goals on a big poster.

But they are close to their ultimate goal: Winning the school’s first 3A girls basketball championship.

“I knew we were going to be good, but because of our age, I wasn’t expecting this,” Givens said. “I didn’t know we’d be able to go against these older, more mature teams in the Metro. I thought it would take a year to get going.

“But I knew we’d be OK after we beat Garfield the first time. I mean, this has been a lot of fun. And going through what we went through last year has been 100 percent worth it.”