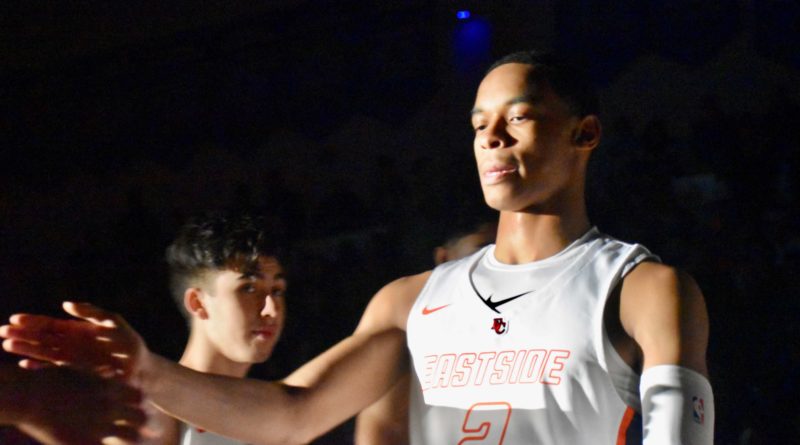 Editor’s note: This is the fourth of a five-part series on what Scorebook Live has selected as the Washington high school boys basketball story of the year this season. The 3A subject is the Eastside Catholic Crusaders.

Eastside Catholic coach Brent Merritt has a play in his toolkit that he deploys when the game is on the line. One player gets the ball, the other four go low to the baseline, spread out, while the player creates a shot. It’s not complex, or unorthodox, but with the right player — one who can score one-on-one at will — it’s borderline unguardable.

It’s a play that’s called for any number of Eastside Catholic’s standouts depending on the moment or the matchup. Sometimes it’s swingman Shane Nowell. Other times JT Tuimoloau is the one tasked with creating a look. But the play got its name — “let’s go home” — because of Nolan Hickman, the point guard for whom it’s called most frequently.

“That’s pretty much the go-to,” Hickman said. “’Let’s go’ means four low and just let me rock out. Give me the ball, everybody spread out.”

It’s only effective with a big shot maker and this year, Hickman has been that guy. After gaining notoriety and several offers in last summer’s club circuit, his career-best junior season has been instrumental in helping the Crusaders (22-3) win a Sea-King district title, and enter the 3A state tournament as the top overall seed.

Ask him, and the 6-foot-3, rangy point guard will tell you this season has affirmed what he’s been trying to prove since he came in as a freshman.

‘Anybody can get it, I’m not scared of nobody’

One of the first open gym’s Hickman attended at Eastside Catholic was during his eighth grade year.

He came in, along with Seattle Rotary teammates Nowell and Isaac Ticeson, wanting to prove not only that he belonged, but also, that he was to be respected.

That’s when he caught the eye of Brock Mackenzie, the steady, established point guard who was the Crusader’s leader. As a means of motivation, Merritt told Hickman that before he could be the state’s best point guard, he needed to be the best on his team. As a means of keeping the fiery eighth grader in check, the coach assured Hickman that he wasn’t.

“He was like ‘yeah, you know, he’s a senior, you know he could really go. I’m pretty sure he’ll bust you,’ ” Hickman said. “And so you know me, I take the challenge.”

After the runs of 5-on-5 at the open gym, Hickman challenged Mackenzie to a game of one-on-one. He says he lost, 11-7, to the guard, who now plays at Division II Point Loma. For Hickman, it served as a humbling baptism into high school hoops, and showed him a sample of what he needed to do to be the best.

Hickman leaned on Mackenzie’s experience and approach to the game as they shared a backcourt during the year they played together. Mackenzie, Merritt said, was always the first one in and last one out of the gym.

“Playing with Brock was a blessing,” Hickman said. “That’s my guy, he taught me a whole lot that freshman year, taught me a lot to do with basketball, taught me how to bring the dog out, not take nothing for granted in the high school season, so I really appreciate him.”

But O’Dea, an 11-seed, beat the Crusaders in the semifinals en route to winning the 3A title. In Hickman, who had a poster in his bedroom with the word “state” that he turned to for motivation, the fire to bring to get back to that stage and win a state championship burned hotter.

It also didn’t hurt that the Crusaders core would return as juniors.

“I feel like we’re a better team now, but last year that’s just where it all came from,” Hickman said. “After the semifinals, the pain, after losing to O’Dea, it took a toll on all of us, even the seniors. Seeing them go away with that much pain, it really took a toll on me, and underclassmen last year. But we took that as a lesson.”

Hickman’s sophomore campaign carried into a club basketball season where he caught the eyes of Division I coaches competing on the Nike Elite Youth Basketball League circuit playing for Seattle Rotary, with whom he’s played alongside his teammate Nowell and O’Dea standouts Paolo Banchero and Jermaine Davis.

By the time the 2019-20 high school season began, he held nine Division I offers, including three from Pac-12 schools — Washington, Washington State and Oregon State.

That’s where he took off.

His career season may be most noticeable by the numbers. He’s up to a team-high 17.3 points, 3.4 assists, 3.7 boards and 1.8 steals per game on 59 percent shooting, 38 percent from the 3-point line. His total field goal percentage is up 20 percent from last season competing in the state’s most competitive league — the 3A Metro League — as well as the national showcase the Les Schwab Invitational, where the Crusaders took on several of the nation’s top teams in Bishop Gorman and Mater Dei.

But his most noticeable characteristic doesn’t show up on paper. It’s often the first thing people notice watching him play.

“He’s unflappable,” Merritt said. “Extremely poised. He can’t be hurried. His confidence is at an all-time high all the time. The moment’s never too big for him, ever. He loves those moments, he wants the ball in those moments. He wants to make a big play, or defensively wants to guard the best player.”

Hickman will tell you he’s always been that way. It didn’t matter that Mackenzie was the older, established player during that first open gym nearly four years ago.

“I don’t shy down from no competition,” Hickman said. “Anybody can get it, I’m not scared of nobody. It don’t matter.”

Is Hickman poised for a big summer? ‘The table’s already been set’

Utah State has started reaching out. As has Gonzaga, which Hickman says has been “showing a lot of love.”

More college interest from bigger schools is likely on the horizon to add to his list of offers, as Hickman will head into the club season this spring with momentum from a strong junior year, in addition to what could be a deep 3A state tournament run.

Matt McKay, a former NBA Scout and grassroots talent evaluator, says “with a lot of conviction” that Hickman’s recruitment will heat up after the high school season.

“The table’s already been set,” McKay said. “He’s gotten some high-level reps. I would expect them to make a nice state tournament run here, and that will lead to the AAU season, and again, to know if you’re Nolan, that you’ve already had moments of brilliance at that level, I think he seems like the type of kid where that’s going to lead to him wanting more of that. And I think this spring/summer for the people who aren’t aware of the caliber of player he is, I think by the end of July they’ll know.”

Those who have seen Hickman play walk away similarly impressed with one aspect of his game: his confidence.

McKay, founder of the professional grassroots scouting service Pro Insight, is no exception.

He noticed it the first time he saw Hickman play during a Seattle Rotary practice nearly two years ago. And in the dozen-or-so times he’s seen Hickman since, that initial read on Hickman has only been affirmed, most notably when he saw Hickman hold his own against Cade Cunningham, the top-ranked recruit in the class of 2020 according to 247 Sports, playing with Seattle Rotary at the Peach Jam last summer.

“That circuit (Nike EYBL) separates men from the boys, and he really elevated and took his game to the next level, and I think he’s taken that new level of confidence, which was already high, and applied that throughout the (high school season),” McKay said.

Scorebook Live basketball analyst Dan Dickau, who played six seasons in the NBA, first noticed Hickman’s confidence and control when he saw the point guard during his sophomore season. He saw a tight handle, a creative dribbler who could create space and pass with precision. His shooting, which he described as “good, not great,” has improved significantly — up 20 percent from the field between his sophomore and junior high school seasons.

For now, Hickman’s drive to prove he’s the state’s best point guard is years in the making. He’s hellbent on the making his name known.

Is it finally paying off?

“From guys I’ve seen, without a doubt,” Dickau said. “I have no hesitation saying that. He’s a legit player of the year candidate in the state. One of the very few guys in that conversation.”

And that confidence? Merritt sees it every day. He’s used to it. That’s why he he pushes Hickman, and when he does, Hickman makes it a point to prove him wrong.

There have been times when Merritt lets Hickman know he doesn’t think he can guard an opposing player. When Hickman does so successfully, he’ll let his coach know he was wrong. Sometimes mid-game.

“He’ll scream it to me, ‘I thought you said No. 12 was good, coach? I thought you told me he could play? He can’t play,’ ” Merritt said. “And I’m embarrassed because he’ll say it in front of the kid. I’m not trying to embarrass the other kid, but that’s what he’ll do. He’ll scream it.”

The game was on the line during a “Battle of the Border” summer tournament at Mark Morris going into Hickman’s sophomore year. Merritt doesn’t remember the score specifically, but with a win hanging in the balance against Camas, he called “four low.”

Hickman’s father, “Big Nolan” Hickman knew what that meant. His son was getting the ball. And he was confident he’d seal it.

Sure enough, “lil Nolan” Hickman hit the shot. After that day, “four low” was re-named “let’s go home,” and it’s stuck ever since.

“When the game is on the line, he still screams it to this day,” Nolan Hickman said.

In the nearly two years since, the point guard has delivered time after time when that play is called. He’s earned the right, Merritt says, from all the times he’s in the gym at midnight putting up shots. From his steady approach, and his cool hand regardless of the circumstance.

“He’s been consistent, man,” Merritt said. “He’s a coaches dream, because he wants to win, he’s not a headache. It helps that he’s a great person as well.”

And he hears those who doubt his team’s ability to win a state championship, and is undeterred.

Nolan Hickman by the numbers