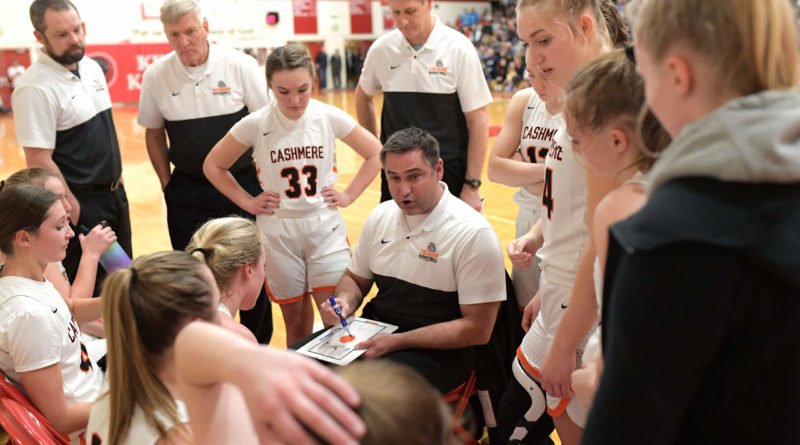 Editor’s note: This is the second of a five-part series on what Scorebook Live has selected as the Washington high school girls basketball story of the year this season. The 1A subject is the Cashmere Bulldogs.

Many would assume that being Louisville point-guard signee Hailey Van Lith’s basketball teammate at Cashmere High School is a stroll on easy street.

That has not necessarily been the case.

But this season, everything has clicked.

Van Lith, a 2020 McDonald’s All-American selection, has been her usual dominant self on both ends of the floor as a playmaker. And she became the state’s all-time leading girls scorer on Feb. 15 in the Caribou League finals, breaking Davenport standout Jennifer Stinson’s mark of 2,881 points.

Guards Grace Hammond and Riley Johnson have consistently made opponents pay for overplaying Van Lith by knocking down perimeter shots. Hammond has arguably been the team’s best 3-point scoring threat.

And forward Grace Erdmann is so versatile, she can guard any position on the floor – and score from anywhere.

“For one, (Hammond and Erdmann) are seniors, and they know I have a lot of confidence in them, so they don’t have to second-guess their shot selection,” Cashmere girls coach Brent Darnell said. “Along with that … we’ve added wrinkles (in our system), and they are comfortable knowing what they are doing, and how we operate offensively.”

The three primary cogs – Van Lith, Hammond and Erdmann – have played year-round together since middle school.

When Van Lith began rapidly improving to one of the elite players in the country, the rest of the cast felt like they were constantly trying to catch up.

“She just blew me away,” Erdmann said. “I kept asking myself, ‘How can somebody be this good?’ And what was so crazy was she kept getting better.”

Darnell noted that one of the traps having a player of Van Lith’s talent level running the show was that players either stood around and watched her, or they hesitated to look for their own offense when she got them the basketball.

“It’s just easy to throw the ball back to Hailey,” Darnell said, “knowing she will make something happen.”

Darnell said one of the best things that happened to his group was when Van Lith spent much of the summer away with the USA Basketball U-19 team.

Without her, the likes of Hammond, Erdmann, Johnson and Jalynn Darnell had to find ways to win ballgames. And they did, against some pretty formidable 4A schools.

So when Van Lith fully rejoined her Cashmere team in for fall league, and for preseason tryouts, she discovered that her teammates were brimming with newfound self-assurance.

“You can have good talent, but it is all about how good the team chemistry is,” Hammond said. “Our team is something special this year.”

Especially Hammond, whose outside-shooting prowess caught the eye of the late NBA great Kobe Bryant when he and his daughter, Gigi, came to watch Van Lith and the Bulldogs in mid-January.

In the locker room after the game, Bryant remarked how sweet Hammond’s shooting stroke was.

“I was smiling ear to ear,” Hammond said. “That boosted my confidence.”

They are all going to feel like all-stars if they close the deal next week on the school’s first undefeated season – and Class 1A state girls basketball championship. They are 21-0 now, and ranked No. 1 in the state.

“Hailey has learned to trust us more, but we also have a lot more confidence in ourselves,”Erdmann said. “When you are out there with her, you cannot think twice about it. You just have to play your game, and remember that Hailey Van Lith misses jump shots at times, too.”