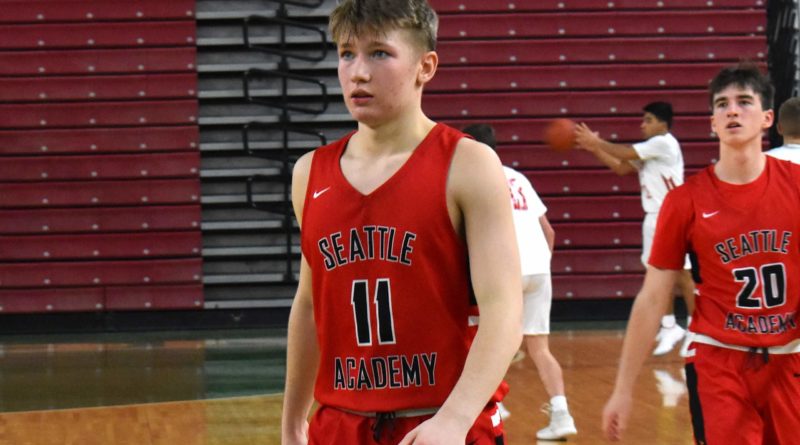 Editor’s note: This is the second of a five-part series on what Scorebook Live has selected as the Washington high school boys basketball story of the year this season. The 1A subject is the Seattle Academy Cardinals.

He understands the changing nature of high school basketball, the rising prevalence and appeal of athletic-based transfers in high school. And as the seventh-year head coach of a 1A school in proximity to some of the state’s highest achieving big-school athletic programs, he takes ownership in building a culture that high school basketball players want to be a part of.

And he’s built his program, which is now led by a strong class of juniors, as a shining rebuttal to the grass-is-always-greener mentality.

“Our boys have done a really good job of blocking out the noise that they should be playing somewhere else or doing something else and really believe in that the experience we’re giving them is special,” Burl said.

The Cardinals (22-1) are sitting pretty. They enter the regional round of the 1A state tournament as the top overall seed after going undefeated in 1A Emerald City League play, then beating King’s to win the 1A Bi-District 1-2 tournament. They’re led by junior point guard Leo DeBruhl, who is averaging 17.5 points, 5.2 assists, 4.6 rebounds and 2.4 steals per game, and 6-foot-6 junior wing Joe Cookson’s 17.4 points, 10.5 boards and three assists per game.

And according to Burl, they’re ahead of schedule.

In 2017, it became clear to Burl that the freshman class could be special. So when he placed freshmen into key roles on the floor, in a way, he was playing the long game.

“I let them play and start, make mistakes from a really young age,” Burl said. “They kind of walked in here, I put the ball in Leo’s hands, told him I trusted him and it was not easy. Definitely some growing pains. Times where they struggled to trust each other, struggled with chemistry.”

The team went 8-14 and missed the state tournament, but by the end of the season, the group grew closer to one another.

As sophomores, that core group took off.

The team went 18-5, nabbing a 5-seed, and entered the state tournament with a first round bye after a regional round win over 4-seed Okanogan. But the Cardinals lost to 11-seed King’s Way Academy in the quarterfinals, 49-39, which left a searing pain that has fueled the team since.

The coaching staff made a point to remind players of the feeling in the locker room after that game during summer ball.

“Without a doubt that was a motivating factor for this group daily,” Burl said.

Playing in the Yakima Sundome, experiencing success there was a lure for the team to compete in the Sundome Shootout in December. Its where the team’s lone loss of the season — an 85-72 loss to Zillah in the Sundome — occurred. But outside of that loss, the Cardinals’ resume stacks up against anyone in 1A. They hold wins over five teams in the 1A state tournament field, and Brewster, a 2B favorite.

What makes Seattle Academy such a tough matchup, one opposing coach said, is how complete its starting lineup is. And that starts with DeBruhl, who has an offer from Seattle University.

“You can’t speed him up,” King’s Way coach Daven Harmeling said of the point guard. “The game is played on his terms. It’s really hard to influence him into bad decisions. He has the mental makeup of a D-I college player right now. He’s not a freak athlete, but his mind is the hard thing to overcome.”

Burl played at Seattle University from 2004-09, and was the team’s most tenured contributor when it moved back up from Division II in 2008 during his fifth season.

His favorite part of playing, he recalls, was being around his teammates. That’s why he’s set on creating an inclusive culture where players want to play for one another.

“There are still people and kids who don’t believe our school is a place you go to be a basketball player,” Burl said. “But I think we’re doing a good job of flipping that. And more importantly, it’s not necessarily about what other teams or kids or players are going to say about our program. It’s more about what our players currently in it believe. If we’re doing those thing well, we’re going to set them up for success when they’re outside of here and be the best team we can possibly be on the floor.”