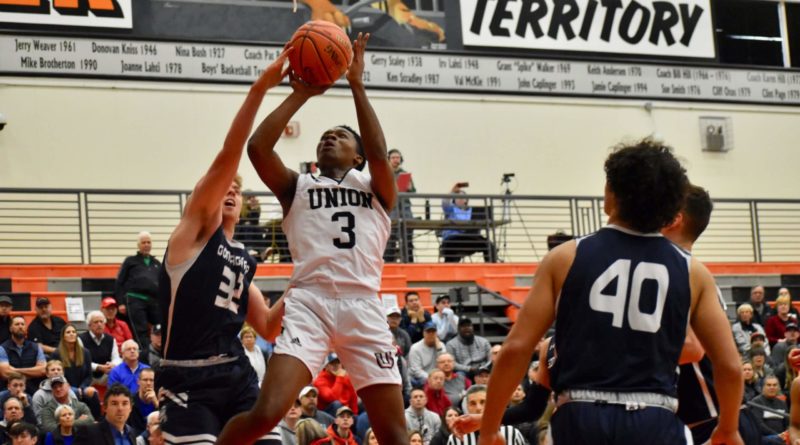 He scored 28 points and Tanner Toolson added 17 to lead top-seeded Union past 8-seed Gonzaga Prep, 66-64, in a 4A regional seeding game on Saturday afternoon at Battle Ground High School.

The Titans trailed at half, and overcame a 34-point outing from Gonzaga Prep’s Liam Lloyd to win its school-best 25th win of the season.

“Any win you get at this point of the year, you’re not harping on it,” Union coach Blake Conley said. “Survive and advance. Now we get the quarterfinals. Our guys are excited. We’re happy to beat a really good team.”

Union plays the winner of Olympia and Auburn in the 4A state quarterfinals on Thursday at 5:30 p.m. Prep plays sumner Wednesday at 9 p.m. in the first round.

In a season which Union has an average margin of victory in the double digits, the Bullpups, who are hitting their stride entering the state tournament, gave Union its closest game of the postseason and showed they can play with anybody.

Mason Hill was left open. After a nudge, he ‘let it fly.’

Mason Hill last experienced being dared to shoot as the means of an opposing gameplan during Union’s win at Battle Ground.

Close followers of the Titans may remember that game as the overtime thriller spoiled by the season-ending injury to point guard Brad Lackey. That perhaps overshadowed Hill’s then-career-high 26 points.

On the same floor Saturday night, the Bullpups dared him. And dared him (see below as the defender sags off when Hill gets the ball).

And at first, Hill hesitated.

But after pausing, wide open, for several seconds with the ball behind the arc, Conley encouraged him to shoot the ball. The Titans were trailing, their own “Mr. Basketball” was on the bench with foul trouble, and they needed him to deliver.

“I lit into him,” Conley said, “and I never have to get on Mason about much, but man, when he passed up a couple of 3s, we said if it’s the same thing against Battle Ground, we referenced that, and obviously he was huge in the second half.”

Hill’s impact was most felt in the third quarter, as his three 3-pointers helped neutralize Lloyd’s offensive outburst, as Union reclaimed a three-point lead entering the fourth.

Hill’s corner 3 with five minutes left gave the Titans its largest lead of the game — 13.

“(Conley) said ‘let it fly,’ and I started shooting,” Hill said. “Through the game I started getting more and more confident.”

Liam Lloyd: through whom all things are possible for Gonzaga Prep

A week ago, Liam Lloyd led Gonzaga Prep past a Chiawana team that had only lost one game all season. They did it twice, and sent the Riverhawks packing.

After a 34-point outburst that, again and again, kept the Bullpups close as Union tried to pull away, Gonzaga Prep now knows it can play with any team in the 4A field it enters beginning with Sumner on Wednesday at 9 p.m.

“This team has grown together, we’ve had ups and downs, and many different experience and the moments that aren’t going your way are the moments you learn the most about yourself and the kids are battling,” Gonzaga Prep coach Matty McIntyre said. “All tonight shows is we can play with the best teams in the state of Washington and that should give us a lot of confidence moving forward.”

After starting the season dropping three of its first four games, the Bullpups, have steadily learned how to play with one another after losing most of its key contributors from last year’s team that won a second consecutive 4A state championship — Lloyd being the most experienced.

One of those early losses was at Union. They’ve come a long way since.

“We’ve grown as a group, as a team and I think we came in a bit more motivated,” Lloyd said. “We want to make a statement in the tournament and going to the dome. I thought we played our hearts out tonight, so that was pretty good.”

McIntyre lauded Lloyd’s leadership. The senior Grand Canyon signee was the team’s only double-digits scorer on Saturday. But what goes most unnoticed, McIntyre said, is the example Lloyd has set off the court.

“That’s probably what I’m most proud of,” McIntyre said. “And the way he competes is second-to-none.”

‘Mr. Basketball’ sat for most of the first quarter. His strong second half helped Union pull ahead, and away.

Toolson picked up two fouls before two minutes had ticket off the clock from the opening tip, and sat for the rest of the first quarter, meaning the top-ranked Titans navigated early stretches of its game without its standout player.

When he went back in the game, Conley advised him not to play cautious.

“I just said you’ve got to play like you play, no matter what you can’t start playing not to foul,” Conley said. “I thought he did a really good job, but to play the first quarter without him, you could tell our energy was a little low and second quarter when he came back we were more ourselves.”

Toolson, who was named “Mr. Basketball,” an all-classification senior MVP handed out by the state coaches association this week, scored nine of his 17 in the fourth quarter, including key free throws to hold off the Bullpups in the final minutes.