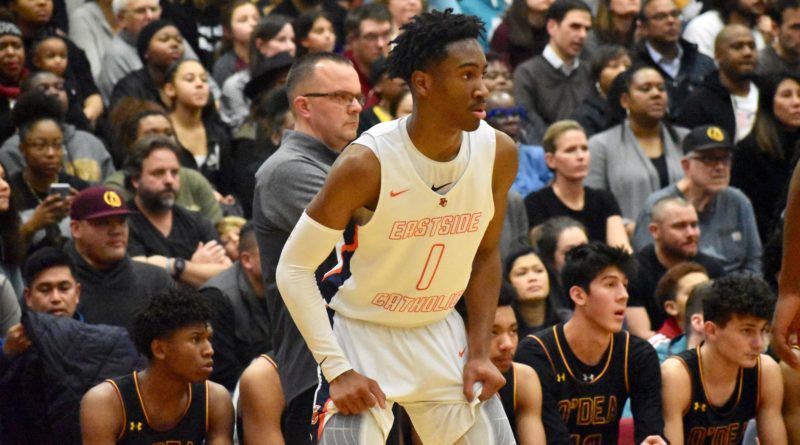 BELLEVUE – This probably should have been a game reserved for one of the final days in the Tacoma Dome.

Of course, that could still happen, especially since the Eastside Catholic and Mt. Spokane boys basketball teams are both coming off of trips to the state semifinals a year ago and return most of their best players. They showed why when they met Saturday in Eastside Catholic’s 76-70 overtime victory over the Wildcats at Sammamish High School in the regional round of the 3A state tournament.

Shane Nowell had one of his best games of the season, scoring 28 points, and going 5-for-6 from the free-throw line in the final minute of overtime for the Crusaders to help offset Boise State commit Tyson Degenhart’s game-high 35 points for Mt. Spokane.

This was all in front of University of Washington men’s basketball coach Mike Hopkins, who sat behind EC’s bench most of the game (his son, Grant, is a freshman who played on the Crusader’s JV).

But it was a much-needed breakout game for Nowell, the younger brother of Hopkins’ former player and Pac-12 player of the year Jaylen Nowell.

“When he plays hard, he’s so much bigger and faster and more athletic than everybody else,” Eastside Catholic coach Brent Merritt said. “He reminds me of when I coached Tony Wroten (at Garfield). When Tony sat down defensively it’s scary because he’s so fast laterally and his hands are so quick it’s scary. So for Shane, just sit down and move because he has that NBA athleticism. And he wants the ball.”

Nowell was switched onto Degenhart late in the game and got a key backcourt steal guarding him one-on-one for a layup.

“Sometimes I just have to tell him, ‘Shane, you’re scary. You’re really scary,” Merritt said. “You just have to go hard. He’s got that.”

Eastside Catholic (23-3) gets a bye into the 3A state quarterfinals on Thursday in the Tacoma Dome, where it will play the winner of Wednesday’s game between Wilson of Tacoma and Marysville-Getchell.

But Mt. Spokane (20-5) certainly did it’s part to try to dispel the notion that the Tacoma Dome runs through Seattle’s Metro League – specifically 3A powerhouses Eastside Catholic, O’Dea and Garfield.

“We played one of the best teams out there today,” said Degenhart, a 6-foot-8 junior who led the Mt. Spokane to the 3A title game last season, where it lost to O’Dea. “We just didn’t pull it out. But we got to play with this same energy at state.”

Eastside Catholic built a double-digit lead in the third quarter before Degenhart took off.

He hit two 3-pointers and finished with a strong move at the rack to cut it to 50-48 heading into the fourth quarter, which he opened with another 3.

That’s something he added to his game over the summer — being able to step out of the post. It was necessary on Saturday when he was met down low often by J.T. Tuimoloau, who is the No. 1-ranked football recruit in the nation 2021 class.

“I had to shift out and extend the defense,” Degenhart said. “I felt like I could do that and it was one of those games. J.T. is a big dude. He’s great and a great rebounder.”

“Tyson’s game has really evolved,” Mt. Spokane coach David Wagenblast said. “He’s not just a post up, post up, post up guy. Those two 3s were huge and you saw the belief we had. As soon as he this those 3s we’re like, ‘We can do this.’ We saw it and we know we’re as good as anyone.”

A big reason Mt. Spokane was able to make a run at Eastside Catholic was because it tried it’s best to take the ball out of point guard Nolan Hickman’s hands. The Wildcats gave junior guard Jojo Anderson the challenge of trying to contain Hickman, who has been making a case for potential state player of the year.

Hickman had 11 points, but he also had plenty of key assists, including one to Tuimoloau after driving to the basket in overtime that cut what was once Mt. Spokane’s 68-65 lead to one.

“And we have other guys who can attack, so we don’t worry about that,” Merritt said. “And he just makes the right plays. He’s not going to force anything. He’s going to stay aggressive and take what the defense give him. He’s the ultimate competitor and he wants to win – he doesn’t care about scoring.”

Hickman followed with a pair of free throws to give Eastside Catholic the lead with 1:05 remaining in overtime and Mt. Spokane couldn’t match Nowell at the line after that, going 2-for-5 in the final minute.

Nowell did much of his work from midrange, much like his brother used to do at Garfield and UW and now for the Minnesota Timberwolves. But Shane said he was playing at about 60 percent while working through injuries to his patellar tendon, ankle and he had a concussion earlier in the season.

“I’d been struggling a little with the injuries and trying to power through,” Nowell said. “I was working on it all week and trying to get ready because I know my team is going to need me in the Dome.”

And that’s why this win was extra important for the Crusaders, giving them an extra day off to get their players healthy heading into the Tacoma Dome.

“We have a tough road,” Merritt said. “We just have to be dialed in. Every possession counts. That’s what we were preaching is every possession. And we have to continue to focus on that.”