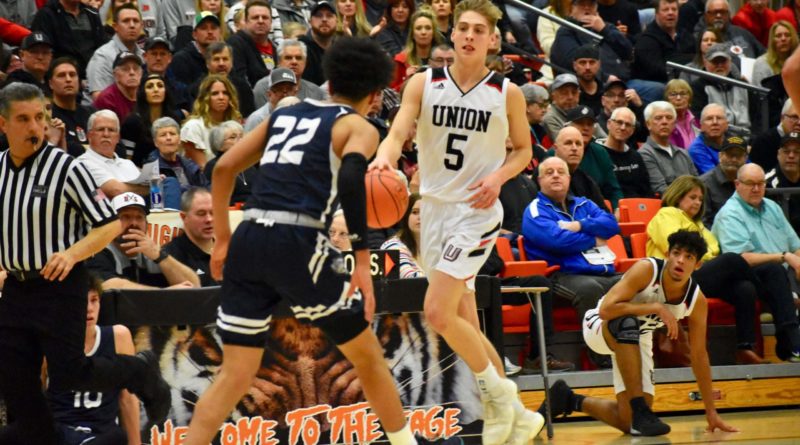 Editor’s note: This post will be updated throughout Saturday’s regional round games at Battle Ground High School.

After a nudge from Union coach Blake Conley, Hill let them fly, finishing with 28 points and six 3-pointers to help the top-seeded Titans (25-0) beat Gonzaga Prep in a 4A regional game at Battle Ground High School Saturday, to earn an automatic first round bye and skip to Thursday’s quarterfinals at the Tacoma Dome.

Toolson, who was named “Mr. Basketball” by the state coaches association this week, picked up two early fouls and sat most of the first quarter, but returned to make most of his impact in the second half.

With his 28 points, Hill, a 6-foot-5 senior, logged a new career-high. He had 26 points on the same court in an overtime win over Battle Ground last month.

After passing up a 3 early, Hill said it was his Conley who encouraged him to shoot when he was open.

“I lit into him,” Conley said, “and I never have to get on Mason about much, but man, when he passed up a couple of 3s, we said if it’s the same thing against Battle Ground, we referenced that, and obviously he was huge in the second half.”

Kyle Gruhler and Squeeky Johnson combined for 42 points to help Skyview overcome a slim halftime deficit and hold off Jackson in a 4A regional loser-out game to earn a trip to the Tacoma Dome.

“It’s amazing to know all of our work is paying off so far, I love it,” Johnson said.

Jace Chatman added 16 points for the Storm, who beat Jackson once before in their season-opener in December.

Jackson led Skyview 22-19 at halftime, before Skyview put together a third quarter in which it outscored Jackson, 19-11. The Storm held a double-digit lead late in the fourth, which the Timberwolves cut to six in the final minutes.

Skyview advances to the first round of the state tournament, where it will play the loser of Mount Si and West Valley (Yakima) on Wednesday at 3:45 p.m.

The senior scored 27 points to lead 10-seed La Center past Bear Creek, 74-59, in a 1A regional loser-out game. With the win, the Wildcats book a trip to the Yakima Sundome, where it will face Trico League foe King’s Way Christian in a first round loser-out on Wednesday.