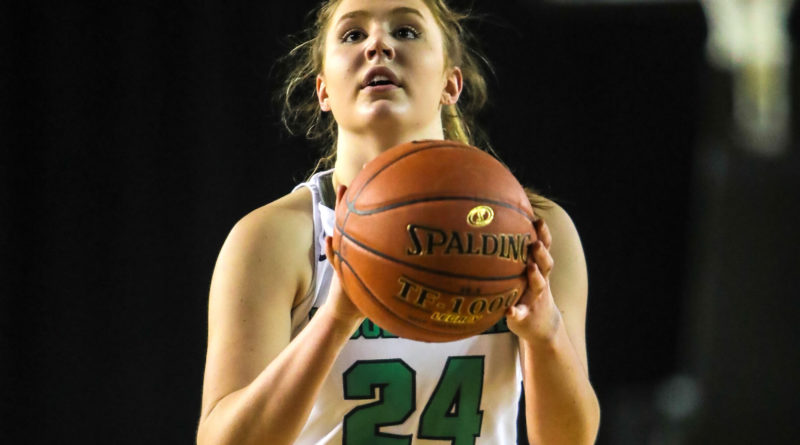 BELLEVUE – Mia Hughes remembers some of her teammates were so nervous this time a year ago that they were throwing up in the bathroom before their regional round of the Washington state girls basketball tournament matchup.

That was when Woodinville was the No. 1 seed in the 4A classification, playing No. 8 Eastlake, who would win that regional game and then go on to win the 4A state title. The year before that the Falcons lost their regional matchup against Moses Lake.

So Woodinville, again the No. 1 seed, wasn’t taking anything for granted this time around, playing 4A SPSL champion Rogers on Saturday at Sammamish High School.

Hughes led the Falcons scoring 10 of her 22 points in the fourth quarter to rally them back for a 70-64 victory over Rogers to ensure that, finally, Woodinville could sit out the first round and get a bye into the 4A state quarterfinals, which will be Thursday in the Tacoma Dome.

“It was a little embarrassing,” Hughes said of losing as the No. 1 seed last season. “I think we came in with the mindset today that we’re 0-0 and that’s what matters. Nothing from this game really matters except from now on we’re 0-0 and we’re in state.”

But this was a battle against Rogers (22-4), which was 17-0 to start the season but since entering the playoffs is 2-3 with losses to Union, Kentridge and now Woodinville.

The challenge was handling the Rams’ top senior backcourt duo of Raigan Barrett, a UW softball commit who is just as talented, if not moreso, in basketball, and Jazmyn Lillie. Barrett went off for a game-high 30 points and Lillie scored 18 and had Rogers leading 48-43 after Barrett’s step-back 3-pointer with about two minutes remaining in the third quarter.

Woodinville looked flummoxed against Rogers’ fullcourt press. And rightfully so – few teams this year have dared to pressure the Falcons’ fullcourt knowing how much they excel in transition.

But Rogers is filled with quick guards, though they lack size.

“That’s our strength – we’re not very big so it’s hard for us to pack the paint down low,” Barrett said. “But if we can speed up the game, we feel good about that.

“Our coach said we’ll start in the press and see how it goes, but they weren’t figuring it out and we stuck with it.”

Until Woodinville finally did.

The Falcons went on a 14-4 run keyed by a pair of 3-pointers from sophomore guard Tatum Thompson. She’s one of a plethora of young players who key this Woodinville attack. The Falcons have just one senior.

Then Hughes got touches in the paint and sophomore guard Veronica Sheffey hit key free throws late to ice it.

“We are definitely not used to being pressed,” Hughes said. “Teams in our league don’t do that because we’re a team known for running. We usually don’t play teams that are that shifty and small and fast.

“I think we knew it was going to be a close game because they’re obviously a good team even though they aren’t big. And I’m not super big, but I thought getting it down low was going to be really important for us.”

Rogers heads to a loser-out first-round game on Wednesday to play Moses Lake at 2 p.m. in the Tacoma Dome.

Now Woodinville awaits the winner of Wednesday’s first round game between Bellarmine Prep and Todd Beamer in the quarterfinals. Last year Woodinville reached the quarterfinals, but lost to Kentridge. And the year before that Hughes remembers playing in the 4A title game when they ran into state powerhouse Central Valley.

“I think if we could pull away and get back to the title game this year, it would just show how hard we’ve worked all year,” Hughes said. “But we can’t get overconfident. We have to come into it saying it’s anybody’s game and we have to play hard and we have to want it. That’s what we’re shooting for. Obviously, we’ll see.”