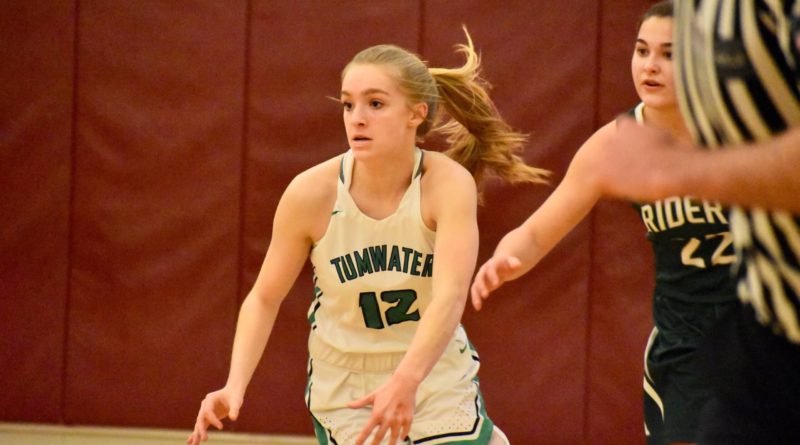 Nobody said it was going to be easy for coach Robin Johnson’s young girls’ basketball group at Tumwater High School.

And the final minute of its Class 2A regional game was proof of that.

Surviving a hair-raising final minute, the third-seeded Thunderbirds held on for a 58-57 victory over No. 6 seed Port Angeles in a regional-round thriller at Mount Tahoma High School.

Tumwater, the 2A Evergreen Conference champion, earned a bye into the state quarterfinals Thursday in the Yakima SunDome. Port Angeles meets Clarkston in the first round Wednesday.

And the Thunderbirds did it behind Natalie Sumrok’s career-high 27 points – and a crazy last minute in which they blew two layups, and missed three consecutive one-and-one free throw opportunities.

The Roughriders had one last chance with 4.5 seconds to go, but Tumwater bottled up Port Angeles point guard Emilia Long. Post player Jaida Wood got off a rushed shot near midcourt that fell short.

DON’T TELL THE T-BIRDS IT’S NOT THEIR TIME YET. THEY THINK IT IS

Even after Tumwater was eliminated from the postseason last season, Johnson still made sure to make a trip to Yakima with her top three ninth graders.

She took her daughter – co-EvCo player of the year Aubrey Amendala, the team’s point guard; top reserve Isabella Lund and Sumrok over to not only watch games, but get a feel for that kind of high-pressure atmosphere.

“It really motivated those three,” Johnson said. “They’ve been gunning for this.”

And the team played like it, winning the league title, eliminating defending 2A champion Washougal in a loser-out game at districts – and winning a regional nailbiter against West Central District champion Port Angeles.

“Making it to state was a huge goal for us, so that is a monkey off their back,” Johnson said.

WHEN NATALIE SUMROK PLAYS LIKE SHE DID SATURDAY, TUMWATER IS A WHOLE DIFFERENT CHALLENGE

Johnson has coached Sumrok in AAU since the third grade. She has seen the teenager’s good and bad days.

But none were better than Saturday. The 5-foot-11 forward scored from everywhere – high post, facing up and driving and even with spin moves in the post.

And her big second quarter – 11 points, including the final nine points in the last 2:28 – turned a deficit into a 35-31 halftime lead.

Olivia Bailon added 12 points, and Amendala chipped in with nine.

“I fill what we need,” Sumrok said. “This game, we were not driving to the basket, and just shooting. So I had to be the inside presence.”

THERE IS A BIG-TIME TWO-SPORT ATHLETE IN PORT ANGELES, AND HER NAME IS EMILIA LONG

In a losing effort, Long was terrific with a team-high 27 points and five steals.

Also a soccer standout, Long is a tough, physical defender who just has a nose for where the ball is going.

“She’s a (NCAA Division I) defender.”