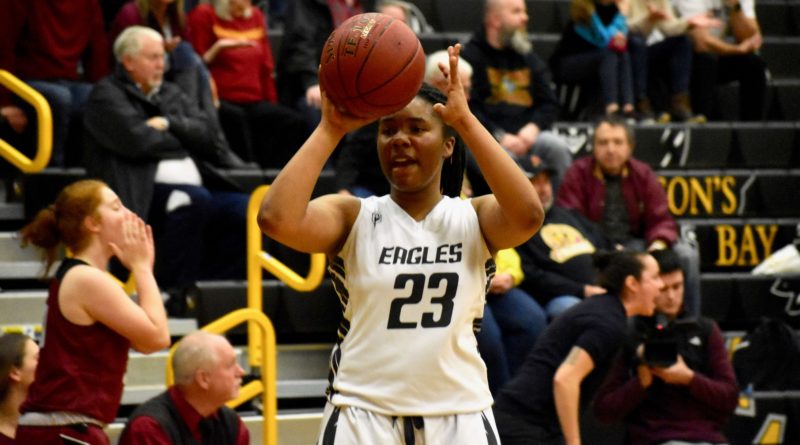 Aniyah Hampton is a sophomore guard at Hudson’s Bay High School in Vancouver. As a freshman, she helped lead the Eagles to the 3A state regional round, the program’s best finish since 2007. She’s the author of a public journal with Scorebook Live Washington, which takes fans behind the scenes of her basketball journey.

Postseason is something every athlete loves to look forward to, no matter what sport they play. Every team is there for a reason and no win is an easy win.

Once the postseason begins, it’s a whole different mindset. Every game you have to be mentally prepared just as much as you do physically. Everyone has something to prove. No matter if you didn’t beat a team in the preseason or league it doesn’t matter. The postseason is a fresh start. The only thing in your mind is to survive and advance. It’s another opportunity to go to battle with your team and represent your school.

For me, that battle will have to be fought on the sidelines. In the final seconds of my second game back from a ruptured achilles tendon last month, I fractured my elbow, which has sidelined me for the remainder of the season. Now, all I can do is be the most supportive teammate and productive voice on our sidelines and in our locker room as possible.

But my team will be fine. They’ve stepped up. Especially fellow sophomore Paytin Ballard, who has adjusted to running the point in my absence having moved over from the wing after my first injury.

Together, we have the same fire within us.

At Hudson Bay were underdogs coming into our 3A District 3 tournament as the third seed, but we made it to the district title and finished second place. Now, we’re the 14-seed in a loser-out regional game against 11-seed Meadowdale. The way we see it, it’s another season of everyone overlooking us. This season we have had to fight through so much adversity that mentally we are very strong and more hungry than ever.

But let’s rewind to last year around this time, where the fire we have all started.

Getting eliminated before accomplishing your goal is such a heartbreaking experience. Seeing our season end last year in regionals to Roosevelt, 48-45, was so hard. As a team led by freshmen and sophomores, we lost by three in a tough game that we believe we should have won. The hardest part to see and hear the other team celebrating. Not only did you see them celebrating on-court after the buzzer sounds, but our locker rooms were right next to each other so you could hear them celebrating. It’s a moment I haven’t forgotten, being so close to your goal and missing it just by a hair.

But you live and you learn, so that’s what we did as a team was take that loss and learn from it. We went into the off-season hungrier than ever. We entered this season with that same fire.

Now, it’s time to prove it.