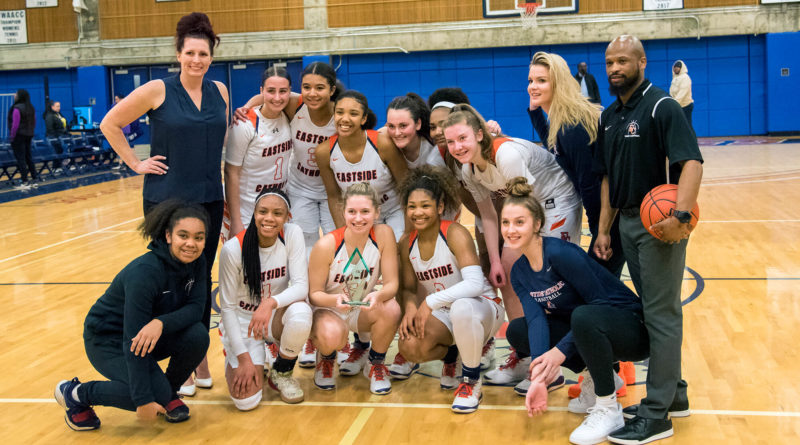 Eastside Catholic’s transition offense was fast and flowing at Bellevue College on Saturday night en route to a 52-48 win against Garfield in the 3A SeaKing girls basketball district championship game.

IT’S NOT HOW YOU START, IT’S HOW YOU FINISH

Eastside Catholic did not get off to a great start, trailing Garfield for most of the first half. The Crusaders were able to get their offense going late in the first half and led 19-18 at intermission. Freshman guards Maria Samuels and Mjracle Sheppard key pieces that helped get the offense going and allowed the Crusaders to get out and score some easy transition baskets.

Garfield’s Dalayah Daniels was the tallest player on the court at 6-foot-4 and the Bulldogs got the ball to her inside early and often, but the Crusaders were able to do a solid job of containing her and limiting her offensive opportunities throughout the game. While Daniels was able to get to the free throw line and score some easy baskets, she was constantly contested by Eastside Catholic defenders and had several turnovers.

Eastside Catholic finished as the No. 1 team in the RPI rankings and will take on the No. 8 seed Kennewick next Friday or Saturday with a spot in the state quarterfinals on the line. The Lions took down cross-town rival Kamiakin 68-36 on Saturday in Kennewick. Garfield ended just outside the top eight in the No. 9 spot and will need a win to keep their season alive.