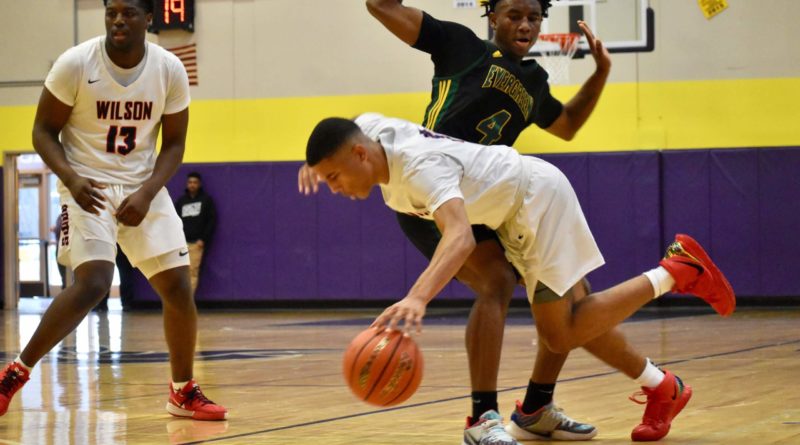 PUYALLUP — Damani Green hit his first two shots — both corner 3s. It was a sign of what was to come for the Wilson Rams.

Green scored a game-high 21 points, combined with freshman Cayden McDaniels’ 20 points and both were instrumental in building a lead over and eventually holding off Evergreen (Vancouver) to win the 3A West-Central Bi-District title game, 81-66, on Saturday afternoon at Puyallup High School.

“It feels real good,” Green said. “It’s what we’ve been working for.”

“Our goal at the beginning of the season was to win Tacoma first, win our league, then our district, and the next one’s to try to go win a state championship,” Wilson coach Mike Cocke said. “They’re excited for the opportunity and they’re trying to make the most of it.

Teams ranked in the RPI top-8 earn auto berths to the state tournament, and play winner-to-state quarterfinal regional round games.

DAMANI GREEN ADDED A DIMENSION TO HIS GAME THIS SEASON: THE OUTSIDE SHOT

Green’s first two 3-point shots were roughly from the same spot: the left corner, right in front of the Evergreen bench.

Both times, he turned around to the opposing bench, and pumped his arms in celebration. Those early 3s, Green said, are key to opening up the game for him and signaling to defenders he can’t be left open.

“It feels good, because when I hit the 3s, now they have to play me up and I’m too fast,” Green said. “I go right past them and get my teammates more involved.”

Green’s ability to hit the 3 this season has fundamentally strengthened his offensive toolkit. He’s shooting around 36 percent, Cocke said, up from the estimated two 3s he hit his entire junior year.

Improving as a capable outside shooter has been an emphasis of Green’s.

“a lot of guys now as they scouted us, they’ve cushioned quite a bit and they give him that shot,” Cocke said. “Now he’s just really patient, takes his time. And those were really big shots early in the game. He kind of helped us build the lead with those shots.”

EVERGREEN WAS WITHOUT ALL-LEAGUE POINT GUARD JADEN STANLEY. THAT MAY CHANGE.

Notably absent from the Plainsmen’s lineup was all-league point guard Jaden Stanley, who suffered a hairline fracture on his shooting hand during the district semifinal win over Mount Tahoma.

But according to Evergreen coach Brett Henry, the junior is aiming for a return int he state tournament.

Stanley, who had a a soft cast around his hand on the bench Saturday, averaged a team-high 14.9 points this season and was a second team all-3A Greater St. Helens League selection, and his absence resulted in a bevy of secondary ball-handlers filling in by committee, most notably junior Jaden Stanley, senior Izaac Romero and Tyler Ricketts.

That didn’t impact the way Wilson prepared, or the intensity it brought.

“I know that was a big deal for them because he sets the table and the tempo for him, but our guys weren’t going to hold back because that guy wasn’t playing,” Cocke said. “He’s a really good player.”

As a sophomore, Stanley was thrust into a starting role after senior guard and leading scorer Dwight Jones suffered a longterm injury at the beginning of the season, and he thrived as a scorer and facilitator.

Wilson freshman Cayden McDaniels has a bright future playing basketball in high school, and likely beyond.

The freshman has spent the year being mentored by Green, a senior, as the two have played key roles on the top-ranked team in the RPI.

“He’s one of the top guys in Washington,” McDaniel said. “Just learning from (Green), it’s good.”

Before the season, Cocke called upon Green as a leader to get the rest of the team to buy into its potential. One of the steps Green took was to bring McDaniel under his wing.

Despite being three years apart in age, the two spend a lot of time together off the court. On the hardwood, Green makes sure to always talk to McDaniel, and to encourage him.

Green’s leadership has been contagious, and what was most evident about the Rams’ was its willingness to make hustle plays, dive on the ground and do the dirty work even late in the game with a double-digit lead.