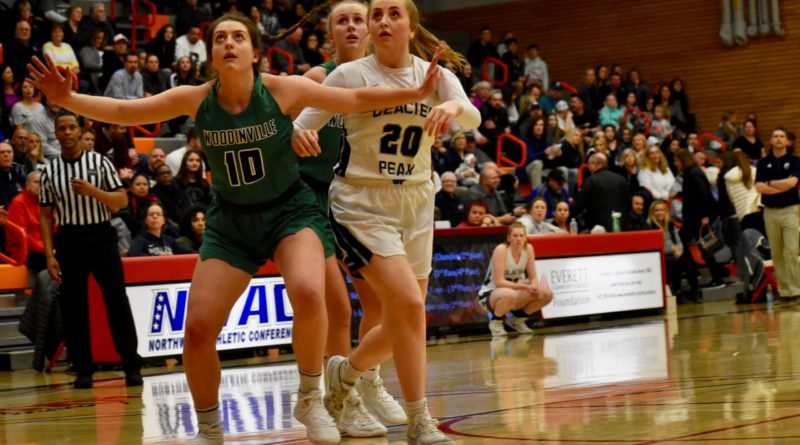 EVERETT — Fans in the know were watching the Wes-King girls district title game Friday night for what it potentially foretold: a potential look at a deep 4A state playoff matchup or, perhaps, a preview of the 4A state title.

What wasn’t in dispute after Woodinville outlasted Glacier Peak in a back-and-forth overtime thriller, was that both teams, which entered the contest a combined 45-2, met its match.

“Everyone who knows girls basketball was like ‘that’d be one to watch,’ ” Glacier Peak coach Brian Hill said. “And it was. We held our own, and I knew they would. We played hard. I’m happy.”

WOODINVILLE’S DEFENSIVE M.O.? ‘NOTHING FANCY,’ BUT NOT A LOT OF GIVE

Hill felt that by the end of the contest Friday night, the team was more fatigued than normal. Credit that too Woodinville’s stingy defense.

“They dare you, they’re just good,” Hill said. “It’s like, ‘here we are, go ahead try to score,’ and it’s hard. Nothing fancy. There is not a lot of give. It’s exhausting. They wear teams out.

Hill’s read on Woodinville isn’t coming from a small sample size. While it’s the first time the teams have played this season, Woodinville and Glacier Peak have gone head-to-head in the postseason in years past.

Last year, Glacier Peak knocked out the top-seeded Falcons in a loser-out game, 53-51, at state after Woodinville lost to Kentridge in the quarterfinals.

The Falcons are under no illusion that they might be headed on a crash course for a rematch with Glacier Peak deep in the state tournament.

“This gives us a little momentum, but that team is going to be coming after us, so we’ve got to be prepared for that,” Sheffey said.

Since both teams had clinched berths to state, Friday night was as much a litmus test as it was a contest.

So when Woodinville standout Mia Hughes was whistled for a charge with around 30 seconds left in a down-to-the-wire fourth quarter, the Falcons had to dig without a key player.

“It’s exactly what we want getting ready to go to state,” Woodinville coach Scott Bullock said.

Added Sheffey: “Going to state, playing in the dome is a big arena, lots of people, this was definitely a really fun game — one of the funnest games of the season.”

With 9.9 seconds left, the Grizzlies inbounded the ball to Aaliyah Collins on the opposite baseline. Collins carried the ball the length of the floor, spun a defender to clear an open tying layup with under two seconds left to force OT.

Collins, a junior defensive stopper, came through with the clutch moment with game hanging in the balance.

“She’s lightning,” Bullock said. “I tell our girls to back up on her and you can’t back up enough.”