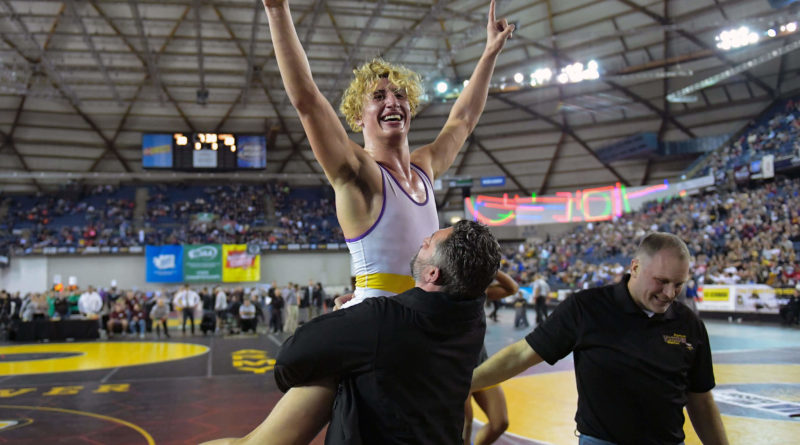 TACOMA – At the end of the night, 84 state champions were crowned at the WIAA state wrestling championships known as Mat Classic.

Next season, Silverthorn and Lillie can join the elite four-peat club.

And one girl – Hudson’s Bay Allison Blaine – captured her third state title at 135.

Chiawana (4A), Mount Spokane (3A), Toppenish (2A), Granger (1A), Tonasket (‘B) and White River girls all won team championships.

Here are five highlighted matches from championship Saturday in the Tacoma Dome:

Yusief Lillie had few problems in the past two Mat Classics in which he won state titles for Bonney Lake High School – at 106 pounds in 2018 (technical fall win over Bethel’s Donnie Krissak) and at 113 last season (16-5 decision over Mount Spokane’s Jarret Sharp).

But it was a little bit different Saturday night.

Lillie was poked twice in the eye by returning state champion Edward Villanueva, and was awarded two penalty points. And he scored his other point on an escape.

But in the end, he was happy to take a 3-1 win to pick up his third Mat Classic title.

When all else fails, and you are trailing late in a match – create your own wrestling move on the fly.

That is what Romero did to set up his winning move Saturday night.

The move – which the Toppenish senior jokingly referred to as “The Kyler” – looked like a mini-Superman-flying-through-the-air maneuver to try and disrupt Michaelson, the top ninth grade wrestler in the state.

When Romero landed on the far edge of the match, he saw Michaelson slightly out of position, and went in for the match-clinching takedown with 10 seconds remaining.

Houston, the reigning state champion at 125, knew all the things working against her Saturday.

She had hardly even beaten Torres, even during summer wrestling.

She was ranked nationally – just not as high as the Eastern Washington standout.

And Torres was making her fourth consecutive trip to the state finals for her career.

And yet, when the two combatants took the mat, Houston was the best wrestler from the get-go, scoring a takedown just 18 seconds into the match and cruising to her second Mat Classic title.

“I haven’t wrestled her in a year, and you never really know until you wrestled someone if you can beat them or not,” Houston said.

Utilizing her speed advantage, Houston went up 8-2 on a reversal and two-point takedown midway through the second period.

“I didn’t want any regrets,” she said.

Isaac Clark is a free spirit.

But when it comes to closing the door on grueling sports moments, the Vikings’ senior has a knack for finishing the deal.

With 18 seconds to go in the fourth overtime, Clark turned the reigning state 182 champion for a match-winning reversal to win his first Mat Classic title.

“He likes to have fun. But then he becomes a gamer,” Puyallup boys coach Bryan Bartelson sad. “When it comes down to that type of moment, that is the guy you want in the game.”

Added Clark: “It was the most competition I’ve had to go against all year. He’s a great wrestler. And I loved every second of it.”

Anderson and Gasper are former national teammates, but before Saturday night, they had never wrestled, or even drilled against each other.

That was OK, Anderson said. In his head, they had wrestled plenty of times.

“Not one time was I not ready,” Anderson said.

Gasper’s rough-and-tumble style drew blood, and even knocked Anderson into the scorer’s table, getting him entangled by cords.

But in the end, his escape to start the final period held up for a slim victory.

And now, not only is Anderson, the son of Chaiwana coach Jack Anderson, halfway to the four-peat fraternity, he has been part of two 4A title-winning Riverhawks teams.

” It means the world to me, my team, our community and our fans,” Isaiah Anderson said. “We are here to stay.”