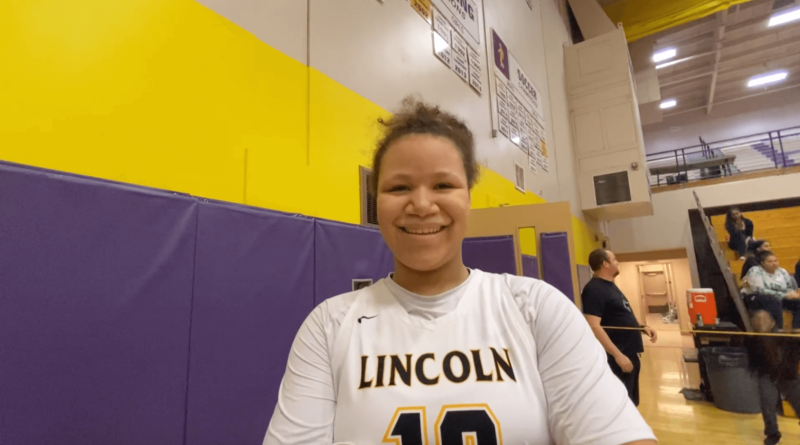 PUYALLUP — She battled, often through, around and over one, two and sometimes three defenders.

She made her presence known early, and Sharayah Johnson mustered the play of the game when she pulled down an offensive board over two opponents and willed the ball off the glass and in with 27 seconds left to lift help Lincoln stave off Hudson’s Bay, 51-46, in a 3A West-Central Bi-District girls final on Saturday at Puyallup High School.

And as Johnson, a 6-foot-4 junior, hovered from teammate to teammate during the postgame celebration, she did so with an arsenal of ice packs fixed to her back, wincing from back spasms that she’s, against odds, played through of late.

“I just know that we needed it,” Johnson said. “We just had to finish the game, and I knew we needed that bucket, so I just grunted it out and through everything that was happening and just locked in.”

Johnson’s game-high 24 points and 10 rebounds were instrumental in the Abes bringing home its third bi-district title in the last five years.

The Abes (19-5), the No. 7 team in the WIAA’s rip rankings, which are used to seed the state tournament, are through to regionals and headed to a guaranteed state berth game in the regional round next week.

Hudson’s Bay (18-7) awaits Sunday’s bracket release to learn where it will play.

Johnson’s back spasms have flared up in recent weeks, calling into question at times whether she could play through them. To her, there was never a question.

“It’s been happening, but I just knew I was going to tough it out,” Johnson said. “I did it for us. My team needs (this). We need each other.”

The pain subsided briefly when Johnson climbed the ladder at Puyallup High School to cut down her share of the net.