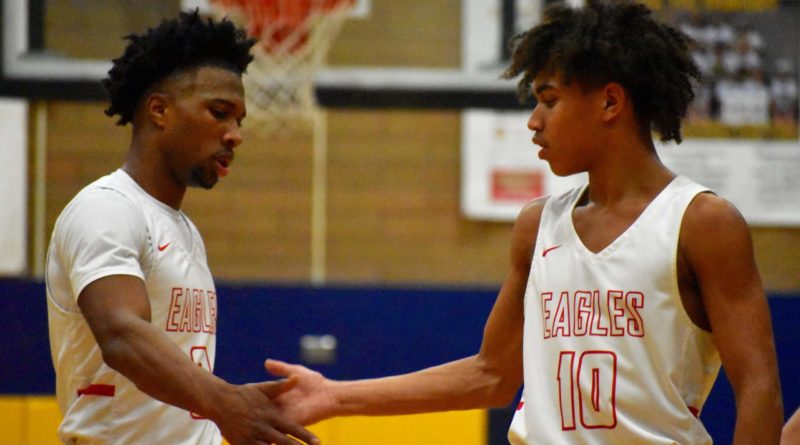 KELSO — Life Christian Academy feels it’s one step closer to doing something many players started thinking about as soon as last season ended with a 2B state semifinal loss to St. George’s.

“You remember that hurt,” Omari Maulana said. “You’re not going to forget that.”

That goal is in clearer focus after a 63-42 win over Winlock on Wednesday at Kelso High School to advance to the 2B District 4 tournament championship on Saturday.

The district tournament pitted four teams ranked in the WIAA’s RPI top-10, which is used to seed the state tournament, against one another. Now, No. 6 LCA will take on No. 3 Toutle Lake in the title at WF West High School.

LIFE CHRISTIAN HAS A BEVY OF SCORERS. BUT ASK THEM THE KEY TO SUCCESS? A DEFENSE-FIRST APPROACH.

In total, 13 of the last 14 games have been double-digit wins for the Eagles. And they credit defense for getting there. Maulana said the goal is to hold opponents to eight points per quarter, and it’s not uncommon for the Eagles to do so at least once per game.

Wednesday night’s performance offered the coaching staff something it roots for in practice: defend for four quarters.

“We want to build on it,” Life Christian coach Charles Simmons Jr. said. “It’s been a defensive mindset all year, and we’re trying to get our guys to buy into the team concept. At times we’ll have one or two guys playing good D, and we need to have five guys playing good D for four quarters.

“Tonight I kind of felt like we put that together. That was a good start.”

BRYCE CLINE SHOWED NO QUIT THROUGHOUT THE GAME — AND WELL AFTER

Bryce Cline, the Central 2B League MVP, gave a stout, defensive-minded LCA bucket after bucket. He hit two banked-in buzzer-beating contested 3-pointers, the latter coming in the final seconds of the first half. He led Winlock in scoring, as he has all season (20.3 points per game).

And afterward, he hit the gym.

According to a video posted to Twitter by Winlock coach Nick Bamer, Cline went to the gym after the team bus arrived back at Winlock High School, and put up shots in an otherwise empty gym, after 10 p.m. on a school night.

There’s a reason Life Christian Academy coach Charles Simmons Jr. stopped Cline as he was walking to the team bus to congratulate and heap praise on him.

Several of Chae Haynes’ baskets in the second half came from second chance baskets.

Nobody was knocking the 6-foot-5 sophomore out of his place Wednesday night. Haynes held a significant size advantage throughout the night, and scored 23 points to show for it.

Nor was anyone going to slow down Maulana. Especially when he got the ball in transition. The 6-foot-1, 180-pound guard was explosive in transition, blowing by defenders to force contact at the rim, or simply finish it himself.

Watch for yourself in the game highlights: