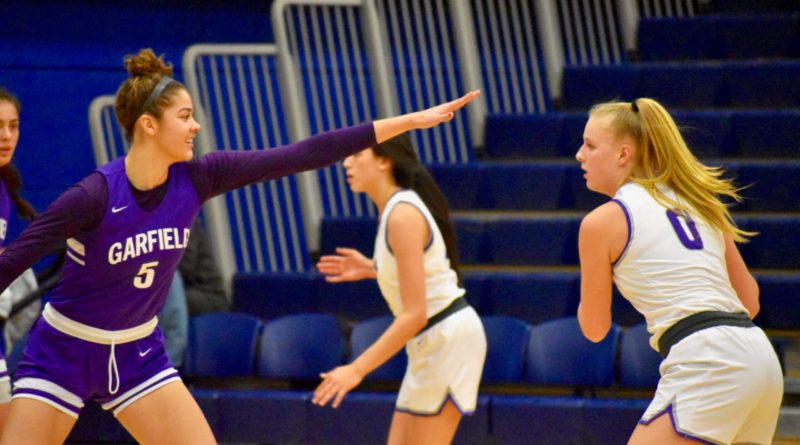 Get ready for Round 3 of Eastside Catholic-Garfield girls basketball rivalry.

California signee Dalayah Daniels scored 16 points before sitting out much of the fourth quarter, and the sixth-ranked Bulldogs held off No. 8 Lake Washington, 63-57, in the Sea-King District semifinals Thursday afternoon at Bellevue College.

Sydney Hani tallied a career-high 19 points off the bench – 14 coming in the second half to spark a late Kangaroos rally.

The Bulldogs will meet No. 2 Eastside Catholic in an all-Metro League showdown for the bi-district title Saturday night in Bellevue. The Crusaders have won the previous two meetings.

WITH EACH PASSING DAY, DALAYAH DANIELS IS LOOKING HEALTHIER – AND CLOSER TO HER OLD SELF

It’s been a while since Daniels, a spring 6-foot-4 wing player, has looked like the dominant player was the past three seasons.

She suffered an ankle injury so serious – and nagging – in late December, she spent a month sidelined, and the past few weeks trying to play extended minutes at less than fully healthy.

“She looked good,” Hall said. “She is starting to get back into shape, back into form.”

Daniels also found a bit of extra incentive in this matchup: She was facing sophomore Elise Hani, also 6-4 and very athletic.

And on two of her first three baskets, Daniels went right at Hani (who was sick and did not play much past halftime).

“She is finding her groove,” Hall said.

WELCOME BACK, SAHCARI DAVIS! SHE GIVE GARFIELD ANOTHER GUARD TO SHOULDER BALL-HANDLING DUTIES

One of the biggest blows the Bulldogs suffered during the offseason was the loss of Davis, a regular in 2018-19 who suffered a serious injury to her right knee during AAU play.

Hall wasn’t sure if Davis would come back at all for her senior season after a second knee injury. But she has recovered so well in eight months, she is back playing – and giving Garfield quality minutes.

Davis scored nine points, including the team’s final five points of the first half, including a 3-pointer.

And in the second half, she displayed a nice spin move in the lane, shifted the ball to her left hand and laid it in for a bucket.

“It was iffy at first if I’d come back, but I’ve been doing a lot of (physical therapy, getting up early in the morning to do stuff. And a couple months ago, I started feeling good again,” Davis said.

“It has been super hard, but I am back.”

SO WHERE DOES LAKE WASHINGTON FIT INTO THE REST-OF-THE-POSTSEASON PICTURE? PRETTY WELL, ACTUALLY

Even in a loss, one thing was apparent – this young Lake Washington squad wasn’t overmatched from an athleticism standpoint.

Point guard Rosa Smith is a future 2A KingCo player of the year candidate who can really break down a defense.

Elise Hani is more of a big-time volleyball recruit, but is a defensive stopper near the basket. And her sister Sydney, who led the Kangaroos in scoring Thursday, is a high-ceiling wing player.

Lake Washington was really done in by 19 turnovers, most coming in the first half. But once the 2A KingCo champions settled down, they were crisp in attacking the interior of Garfield’s defense.

Well inside the top eight in the RPI, Lake Washington is a lock to play in the Tacoma Dome.

“We are in that second tier of teams (behind Eastside Catholic),” Wilson said. “If we take care of turnovers and offensive rebounding, we can play really with anybody.”