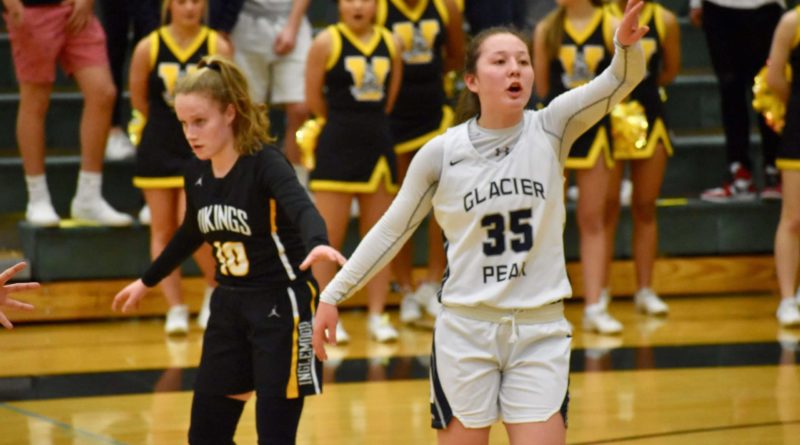 Glacier Peak High School girls basketball coach Brian Hill was very excited to extend one of the more impressive streaks around the state.

His second-ranked Grizzlies will be playing for a district championship for the ninth time in the past 10 seasons.

Led by reigning 3A Wesco player of the year Aaliyah Collins’ play on both ends, the Grizzlies pulled away for a 63-45 Wes-King District semifinal victory Tuesday night over No. 6 Inglemoor at Jackson High School in Mill Creek.

They are the last team to beat the Falcons, eliminating the KingCo powerhouse in the Class 4A state tournament a season ago.

THE GRIZZLIES HAVE WEAKNESSES (SUCH AS REBOUNDING), BUT THEIR LIST OF WAYS TO BEAT TEAMS IN LONG

Hill said his team played one of its most complete games of the season Tuesday – and it showed up big time.

Even when Inglemoor got off to a fast start – 15 points in the first 6:11 – the Grizzlies matched their high-scoring output.

And in the second quarter, they locked the Vikings down, holding them scoreless for 5:50 while building an 11-point lead with their usual quick-striking transition defense.

After being slowed by Inglemoor’s zone defense late in the first half, they went right to their dribble-drive offense behind Collins, who picked it apart by getting Erling and Rubino in scoring positions.

“I still don’t know if we have played our best game – I am still waiting for that to happen,” Hill said. “We are getting closer. We played pretty darned good tonight.”

MAYA ERLING IS GLACIER PEAK’S BEST ALL-AROUND PLAYER, BUT COLLINS iS THE MOST IMPORTANT

There was a time late in the third quarter Hill was getting squirmy on the bench.

His team held just a 40-34 lead. And Erling picked up her fourth foul with 1:58 remaining, and had to take a seat.

But Rubino scored the team’s final three points of the quarter, including a baseline jumper off a turnover.

And Collins opened the fourth quarter with back-to-back buckets – the second one coming off a steal – to push the Grizzles’ lead to 47-36 lead at the 5:59 mark.

“Me, Maya and Madison have playing together for a really long time,” Collins said. “We are kind of like a trio, so when one goes down, the other two want to step up.”

AT TIMES, IT LOOKS SO EFFORTLESS FOR INGLEMOOR OFFENSIVELY. AND THEN THE VIKINGS LOSE IT SO SUDDENLY

If the Vikings take care of business against Lake Stevens in a loser-out game Thursday, and advance to regionals, they will certainly be a scary opponent for somebody moving forward.

Point guard Lucy Young can fill it up in a hurry – like she did Tuesday with eight first-quarter points, including a pair of 3-pointers.

And Colbi Zorich is a sophomore wing you will be hearing lots about in the coming years. She is a smooth face-up scoring threat who can shoot and slash to the rim.

They are athletic. They are feisty.

And they are prone to funks, too.

The only reason the game did not get away from them in the first half after a 5:50 scoring drought was because of the effectiveness of their zone defense.

But in the second half, they went without a field goal for a 5:10 span.

“We had stretches of playing really good defense. Not capitalizing by scoring was really frustrating.”