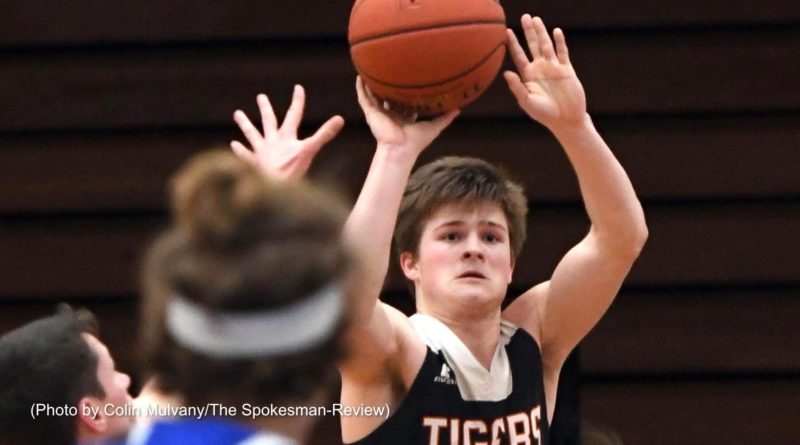 His parents demurred, his teammates poked and prodded, but Ryan Moffet was unwavering in his decision.

He decided to specialize in basketball as a sixth grader, an occurrence that is increasingly more common in high school athletics at large, but not in small-town Odessa, where the school has roughly 100 student combined between middle school and high school.

But Moffet was indignant. He figured then that in order for him to reach his basketball potential, he needed to devote his athletic life to the sport.

Moffet broke the Washington state boys career scoring record of 3,100 points in a 22-point outing in Saturday night’s district win over Cusick, 70-56, just over a year after it was last broken by former Kittitas standout Brock Ravet.

In achieving something he’s been quietly working toward for years, Moffet feels validated for his decision to— but not satisfied.

“I decided it was something that I was going to do for me, it was best for me and it’d pay for my college hopefully,” Moffet, whose undefeated Tigers are the top-ranked 1B team across several rankings, said. “I wanted to be great at basketball. So this is what I needed to do.”

On Feb. 3, Moffet became the second-ever Washington high school basketball player to surpass 3,000 points, and he did so in a 43-point outing at Valley Christian. His 29 points against the same team on Friday brought him within 42 points of the all-time record — 3,100 — set by Kittitas’ Brock Ravet last year (Ravet surpassed Lance Den Boer of Sunnyside Christian’s all-time best 2,857 points, set in 2003).

On the same day that Moffet broke the scoring record with about three minutes left in the second quarter on a transition layup, Cashmere standout Hailey Van Lith also broke the girls career scoring record — previously Jennifer Stinson’s 2,881 career points — in a 46-point outburst in an 84-28 win over Omak.

The Tigers have won by a margin of 25 points or more 16 times this season, so many times Moffet accrues his nightly point totals in the first half. And many of his baskets come in transition, before the defense has a chance to run dibble teams, hedge screens and deploy tactics to disrupt the scorer.

Even then, Moffet finds a way to fill up the stat sheet. One emphasis in the offseason was improving his ability to score at the rim through contact.

“He’s really gotten stronger, been able to do that so much better,” Weber said. “And his range is pretty much unlimited, he can shoot 10 feet behind (the 3-point line).”

Moffet is a four-year varsity player at Odessa (22 points) who has added a little bit more to his game each year. Even before the season started, he knew the record was within reach, but he wouldn’t boast about it, or really even broadcast his desire to break it.

In part, it was self-effacing. He figured people would automatically try to draw comparisons between him and Ravet, who is among the most decorated scorers to play high school ball in Washington, and was a Division I recruit. Moffet has an offer from Division III Lawrence University in Wisconsin, and the scholarship is for academics.

“I sat there quietly, didn’t say anything, no one knew about it,” Moffet said. “No one knows about it until now and I worked really hard because I wanted it really bad, and I wanted to prove I could do it.”

He entered the season needing to average in the ballpark of 32 points per game, similar to the clip he scored at last season (32.1 points per game) to break the record, and Odessa would need to play into the postseason for him to have a shot.

Both have panned out accordingly.

Moffet is averaging 32.8 points per game, as well as 2.8 steals, 2.5 assists and 2.1 boards. He takes around nine 3-pointers per game on which he shoots 43 percent — up four percent from last season.

He credits much of his growth as a player can to his year-round devotion to basketball. Weber says Moffet is in the gym all but 10 days out of the year “lifting, shooting, ball-handling.”

Weber added that it’s rare to see a high school athlete focus on one sport — even mores in Odessa. Senior forward Marcus King, the two-time 1B state football player of the year, plays three sports, as do many of Moffet’s teammates.

With its front court bolstered by the return of big man Mason Dewulf from an operation to treat complications related to turf toe, top-ranked Odessa is determined to bring back its first state title in program history, and unseat Sunnyside Christian (12-8, No. 19 RPI), winners of the last three.

“It helps to have a kid who can score 40 on any night,” Weber said.

Now, Weber hopes the cloud of attention brought to the program in anticipation of the record, which he thought caused the team to play a little tight, has lifted, so the team can focus on its ultimate goal: “winning a state championship.”

That’s Moffet’s ultimate goal, after becoming the state’s all-time career leading scorer. He feels the target on his back, and he relishes in it.

“It’s just made us play harder. They say when you get to the top, it’s when you relax. It’s the complete opposite for us. We’ve just started to rev it up even more.”