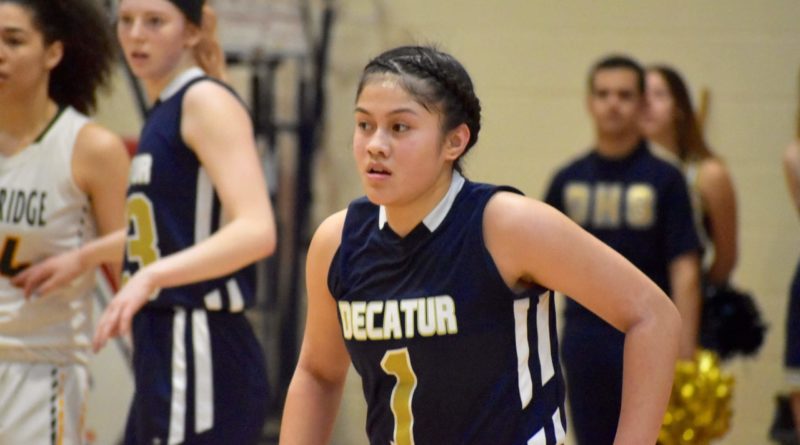 The state’s largest Class 4A bi-district tournament – involving 19 teams – held all of its quarterfinal matchups Saturday at Wilson High School in Tacoma.

And there were a couple of surprises.

Decatur, which hasn’t been in the state tournament since 2000, punched its ticket to the regional round with a 38-34 victory over 2017 state champion Kentridge – ranked No. 9 in Scorebook Live’s 4A rankings.

And 4A SPSL champion Rogers of Puyallup (ranked No. 6) was upended by 4A GSHL runner-up Union, 50-36. The Titans are in the regional round for the first time since 2018.

Here are three game observations from both games:

Jewel Young scored a game-high 13 points, including her two free throws with 13.5 seconds to go that iced the Gators’ improbable victory over the 4A NPSL Cascade champions.

The Chargers grabbed their final lead, 33-32, on Naomi Hall-Schiffner’s field goal with 1:43 remaining, but Young answered with her twirling bucket at the other end.

No. 1 – Decatur’s ninth graders are really poised, and showed that in the final minute: Young and forward Lani McConville display a maturity well beyond their years.

Decatur girls coach Elon Langston said Young – the daughter of assistant coach Thomas Young – showed that the first day he met her in the fourth grade. And McConville has “kept building, and building and building” into the type of player she showed in the fourth quarter (six of her eight points in the final 6:27).

With the game tied at 34-all, McConville calmly stepped up and sank two free throws with 41.1 seconds to go. And after a Kentridge turnover, Young did the same thing.

“I wasn’t nervous. I can’t be,” Young said. “If the leader has doubts, it goes to the rest of the team. It leaks out.”

No. 2 – The Gators’ defensive-oriented style is a great fit for the Tacoma Dome: The last time Decatur was anywhere near a state tournament, Langston was an eighth grader on his way to Federal Way High School.

He excelled at defense as an Eagles’ guard – and has taken that approach with his team.

The Gators are as into-your-grill defenders as you are going to find. And their feet and hands are always moving, getting to loose balls or swatting away passes.

“It all starts with energy,” Langston said. “We knew we had a strong group, and that was our focus from day one. I told them, ‘If you can stop somebody, you have a chance to win every single game.'”

No. 3 – This is a new road for the Chargers to take in the postseason: One of the head-scratching thing about this result Saturday was that Kentridge came in with a track record and state-experienced roster – and fell apart down the stretch.

Afterward, senior guards Dayla Ballema and Kiernen Denckla (as well as injured center Jordyn Jenkins) made sure to remind the team that the goal was still intact. The Chargers just have to win one loser-out game, and they will move on.

“Our goals are still in place, the route has just changed – and it’s a route we haven’t normally taken the last couple of years,” Kentridge girls coach Brad McDowell said.

“It is going to come down to our decision-making and how well we make good passes, and how well we control the situation. Early on today, it felt like we were rushed .. and going too fast for ourselves, which isn’t like us normally.”

Mason Oberg scored 21 points, and the Titans used a 9-0 run early in the fourth quarter to take the lead for good in upending in the Rams in Tacoma.

Barrett led the Rams with 13 points.

No. 1 – Oberg and Barrett are essentially basketball’s version of twins: It is rare to see two guards who are the same height (5-foot-5) with the same shooting range (deeper than most) – and display the same fiery attitude.

“They are both just competitors,” Rogers girls coach Amy Looker said. “They are both going to try and find a way to win when the game is on the line.”

And what would you expect from two 2019-20 league most valuable players?

No. 2 – Maybe Union was a tad overlooked in this bi-district tournament: Maybe it was a new-year loss at Camas – and then a home defeat to Skyview that caused people to forget that the Titans began the season on a seven-game winning streak.

And maybe because the school’s boys team is No. 1 in the state – the girls got lost in the shadow.

Union girls coach Gary Mills was quick to point out that three of the Titan’s four losses were by two points or fewer (Bellarmine Prep, Prestonwood Christian, Skyview).

Mills added that his team has certainly “filled some cracks” on its weaknesses as the season as gone along, especially rebounding (an area in which they controlled the game Saturday against Rogers).

“I was trying to figure out how we could be one of the better teams in the state, but not be the best team in our own league,” Mills said. “I would not change a thing on how our season has gone … because we do the little things a little bit better now.”

Rogers missed 13 of its 15 field-goal attempts.

“That is the game,” Looker said. “We had a lot of open looks in the fourth (quarter) that didn’t go, and that isn’t characteristic of our team.”

And this season, they eclipsed the 60-point barrier 15 times; 70 points seven times; and 80 points three times in their 20 victories.

“Sometimes (bad shooting) just happens,” Looker said.It was not our night. Union is a good team.”