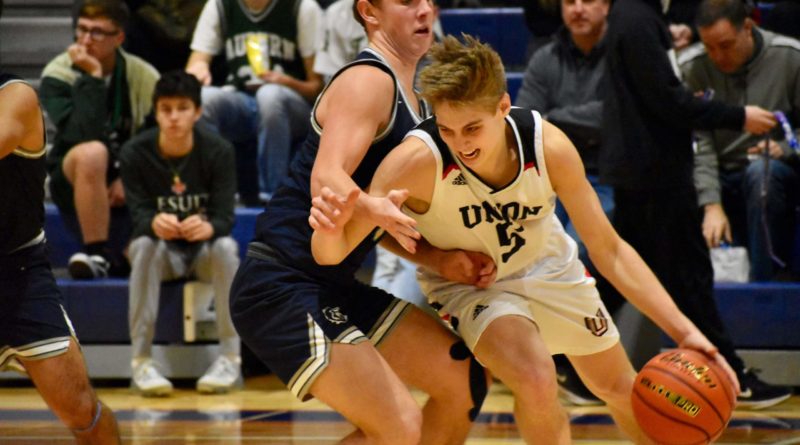 The top-ranked and undefeated Union Titans are headed back to the Tacoma Dome.

But Union scored the next 10 points, capped by Mason Hill’s 3-pointer early in the fourth quarter, to grab a 51-39 advantage.

Kaden Horn added 13 points, including three 3-pointers for the Titans, who are now 22-0 and will play Sumner in the bi-district semifinals.

WITH NO STEADY-EDDIE BRAD LACKEY, UNION WILL UTILIZE A LOT OF ARIYA BRISCOE, AND SOME OF TANNER TOOLSON AT POINT GUARD

The one thing Titans coach Blake Conley rarely had to worry about with senior Brad Lackey running the point was poor decision-making in transition. The guy was rock solid.

But after Lackey suffered a season-ending knee injury, the Titans have turned to Brisco, a bulky 6-foot-1 junior, to be the team’s primary ball-handler. They will also sprinkle in the do-everything Toolson into the mix.

“We have to carry the load,” Toolson said.

Conley said he saw better progress made by the offensive unit against Olympia.

“The last couple of games, we’ve been out of sorts on offense,” Conley said. “This was the best execution we’ve had without Brad.”

Amazingly, after trailing by as many as 16 points, Olympia actually had possession of the ball with a chance to tie – or take the lead – trailing 41-39 late in the third quarter.

And that is as close as the Bears would come.

Union forced two crucial backcourt turnovers that triggered the decisive 10-0 run. The second one was a steal by Toolson, who was fouled. He made both free throws, and the Titans led, 48-39.

The emerging senior was played everywhere – low post (guarding the 6-10 Grant at times, even blocking the big man’s shot), high post and at point.

He made seven of eight free throws in the final 2:20 as well.

“He has improved a lot. He really has confidence on that team,” said Grant, who is Toolson’s AAU teammate with the Washington Supreme.

“With the Supreme, he was not the first or second option. But on this team, he has grown into that role really running the team. I see the confidence in his shot and the way he is attacking. He plays well all over the floor.”

WITH OLYMPIA, NOW WHAT? IS IT ‘GO’ TIME OR ‘NO-MORE’ TIME IN CONSOLATION LOSER-OUT GAMES

With Grant and Johnson, the Bears have one of the better duos in the state.

And the way Olympia kept coming back after its slow start Friday, it is plainly obvious the Bears could make noise deeper in the postseason – at regionals and at the state championships.

But they now have to face 4A SPSL rival Puyallup in a bi-district loser-out game Monday.

Last season, they lost to Union at this same juncture, and came back a few days later and saw their season end at the hands of Battle Ground.

“It’s all going to be on full display Monday. You want your season to go on, you better take care of the ball. You better score the ball. And you better defend all together. You do all that stuff, you’re going to keep playing.

“If there’s a letdown, I’m coaching the wrong team and I’m the wrong coach.”