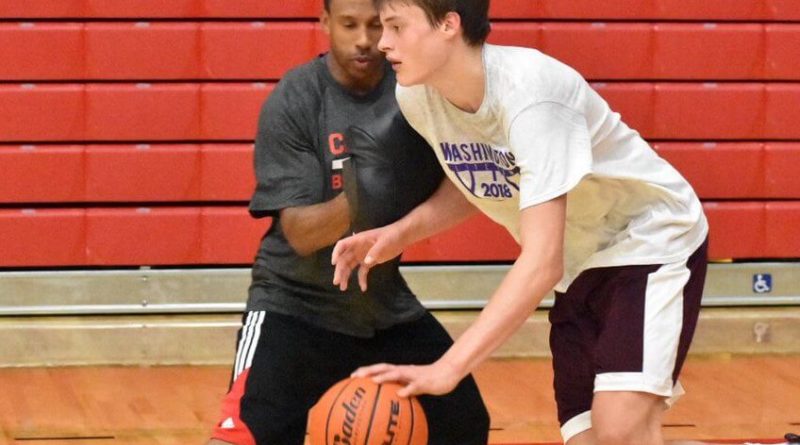 Malcolm Mack spent a portion of Monday morning making sure his official postseason roster included a standout point guard who hasn’t yet played this season.

He also finalized a game plan for the Ingraham boys basketball team’s Metro League tournament opener against Rainier Beach that included 6-foot-10 Saint Mary’s commit Mitchell Saxen, who returned from a back injury to make his season debut Friday.

Without both senior point guard Maui Sze, a transfer from Roosevelt who awaits an appeal in an ongoing ineligibility ruling, and Saxen, a double-double machine and game-changing rim protector, the Rams (12-9, 11-5 Metro League ) enter the postseason with high hopes, a year after making the state tournament for the first time in 44 years.

“We’ve held our own without literally our two best players,” Mack said. “So getting those guys back, even in practice, with Mitchell, it’s like having a new toy. They love going to him because he demands the double-team most of the time and is a great passer, they know they’re going to get wide open looks.”

After making the postseason as the Metro League 6-seed, Ingraham feels it’s a new team entering the playoffs. And they’re off to a promising start after beginning the Metro League tournament with a 58-51 win over Rainier Beach on Monday night.

Saxen scored 12 points, 10 boards and blocked five shots in 18 minutes in the win. He played 12 minutes in his season debut Friday, and is close to 100 percent healthy, Mack said.

Saxen’s return to the court has been much-awaited. After suffering his unspecified back injury in September, Mack says he did not miss a practice following the injury, and always participated in shooting drills and kept his conditioning up on a stationary bike.

Having him back at full strength, Mack said, immediately relieved pressure from 6-foot-6 sophomore big man Malek Gomma, and has opened the game up more for senior wing Latrell Jones and senior guard Coz Collins, a third team all-Metro League selection last season.

Mack said before the season that one of the toughest challenges to bringing in transfers is getting the team to gel as a unit. But when Sze first joined the team in June for Gonzaga team camp, the Rams clicked right away. They won the Gonzaga team camp tournament, then won a fall league that included ranked area opponents Garfield and Mount Si.

“Those two and with the rest of our group,” Mack said, “we haven’t lost a game.”

But will Sze, a second-team all-Metro League selection as a junior, see the court again this season? That much is up in the air.

Sze was ruled ineligible by Sea-King District II officials on Dec. 10 on the grounds of a WIAA rule that prohibits transfers for athletic purposes without proving a hardship occurred. The WIAA upheld that ruling on Jan. 7, according to documents reviewed by Scorebook Live Washington. While Sze remains ineligible, his family continues to appeal with the WIAA.

WIAA Sports & Activities Information Director Casey Johnson declined to comment, citing a staff policy that prohibits commenting on specific student eligibility cases. Similarly, Ingraham athletic director Staci Huffer said she is “not in a position to speak on this issue.”

What would the potential addition of Sze, an accomplished high school point guard, mean for the Rams?

“We get the two of them back full strength, I think we have a chance to win a state championship, so it’s huge,” Mack said. “That’s where we are. With Maui not there and Mitchell back … we still have a good shot.”