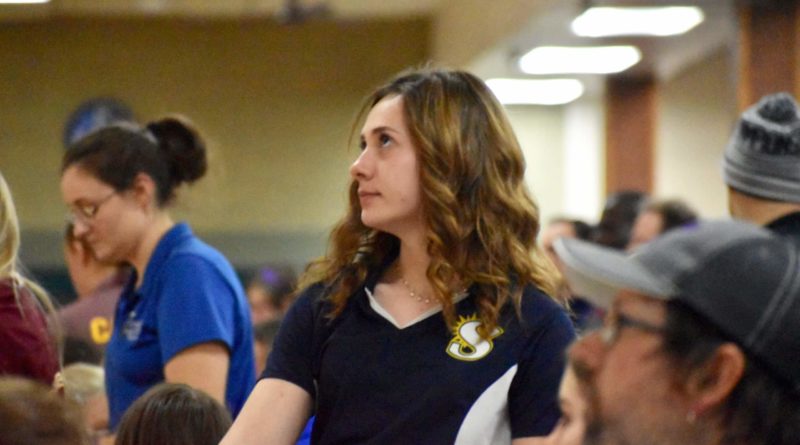 After the second game, Omlor had posted back-to-back 200-pin scores – and yet still trailed North Thurston’s Juliauna Gosney by 68 pins.

“My approach was,” Omlor said, “I bowl what I could bowl.”

And in the end, it was good enough to net the Suns’ senior her first state championship.

Omlor finished the final game with five consecutive strikes to reel in Gosney. Her 214 game gave her a state-winning, six-game total of 1,271 pins, just ahead of Gosney (1,244), who rolled a 176 at Narrows Plaza Bowl in University Place.

“This means quite a lot,” Omlor said. “Last year, I was fourth – and this year I wanted first.”

As a second-year program, Southridge benefits from having a leader of Omlor’s caliber. She is the two-time Mid-Columbia Conference bowler of the year.

Even when things look bleak.

In the seventh, Omlor left a solid 10-pin, and missed for her second empty frame of the final game.

But also in the seventh, Gosney was left with a difficult spare pickup, and missed.

After that, Omlor wiped out the remaining seven-pin deficit decisively – with five consecutive strikes to close out the tournament.

In 4A, Emerald Ridge junior Samantha Dolan didn’t have any opponent to stare down next to her in the final game. In fact, she had no idea how much she trailed tournament leader Haley Rogers, of Moses Lake (1,157 pins), who finished up an hour earlier.

“I just went out there and threw the ball down the lane,” Dolan said.

Dolan became the third Emerald Ridge bowler to win a 4A girls title – and first since Courtney Couch won it all in 2011.

“A lot of (being in position to win) came from that 248 game,” said Dolan, who was bowling in her first state tournament. “But I still didn’t know I won until my coach (Al McCormack) came up to me and said, ‘Good job, state champ!'”