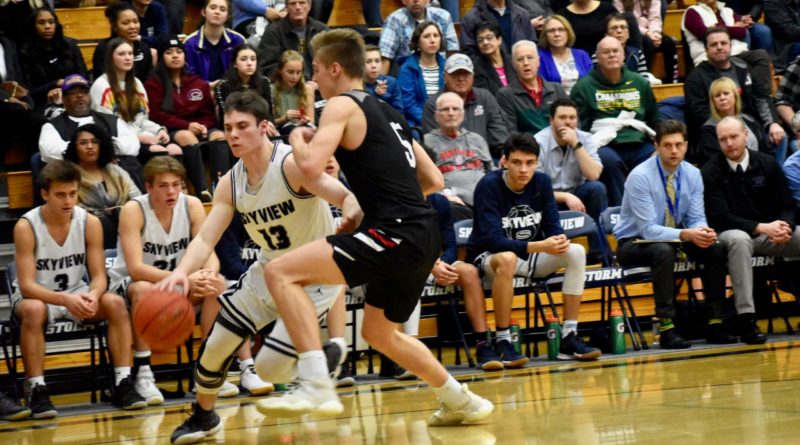 Instead, he took his improbable buzzer-beating 3 and Wednesday’s thrilling 89-80 overtime win over No. 9 Skyview as a sign that the No. 1 Union boys are doing something right.

Toolson scored 30 points, including a last-second regulation 3 to tie the game at 74-74, and the Titans put a stamp on an undefeated season (20-0) entering the 4A District 4 tournament as the top seed. Skyview drops to the 3-seed, while Battle Ground nabs the 2-seed.

Union survived a mammoth senior night outburst from Skyview forward Kyle Gruhler, who signed with Northwest Nazarene early Wednesday morning. His 35 points (on 70 percent shooting) and eight boards put Skyview up by as much as five in the final minutes of the fourth quarter. But Kaden Horn (28 points) Ariya Briscoe and Toolson seemed to meet every bucket with an answer.

Toolson had perhaps the most emphatic answer.

Here are some observations, interviews and full game highlights from an electric Skyview High School:

The shot, in all its glory

But after Josh Reznick found Mason Hill at the top of the key on a baseline inbound, who sealed his defender and handed the ball off to Toolson, that didn’t deter the senior from letting fly on a shot that he says felt good the second it left his hands.

“Once I released it, it felt really good,” Toolson said. “You can’t really prepare for that one, but we went through our plays, executed perfectly and got the shot we wanted.

As Brad Lackey still awaits an MRI for his Jan. 28 knee injury that is feared to be season-ending, the Titans got its biggest test in playing without their all-league point guard and emotional leader.

Ariya Briscoe handled some point guard duties, junior Kaden Horn slid into the starting lineup and handled much of the duties bringing the ball up. Lackey was on the bench in a brace on his right knee, which he’s worn since landing awkwardly on his right side against Battle Ground.

“It’s definitely been an adjustment and a struggle,” Toolson said, “but Brad’s still on the sideline, he’s still with us and he’s still got a big role on this team. We need him, no matter where he is.”

The real kicker? Outside of a little RPI cushion, Union wasn’t playing for seeding or a postseason berth. The top seed was already secured, and a loss may have not only not impacted the Titans state tournament seeding much, but it may not have even bumped Union off of the one-line in the WIAA’s RPI rankings.

Now the Titans, who lost to Curtis in the 4A state quarterfinals last year and didn’t place as the No. 1 seed, complete a two-year regular season stretch in which they went a combined 40-0.

A tougher path stands in Skyview’s way, but don’t get it confused: the Storm are a state tournament-caliber team

That means the Storm must travel north to play Enumclaw in a loser-out play-in game Monday for the chance to play the top 4A South Puget Sound League team — likely Puyallup — on the road Wednesday.

The Storm hold wins over No. 5 Federal Way and Battle Ground, and gave top-ranked Union two of its three closest games of the season.

Hear from the game’s stars

Watch Toolson dissect his game-saving shot, and the Titans’ mentality entering the postseason:

Watch Gruhler, who had among his two best games of the season against Union this year, react to the thrilling game, the environment, and receive some congratulatory support from his dad, Skyview coach Matt Gruhler:

Here are the top plays from the game, which played to a packed Storm Cellar and two full student sections: