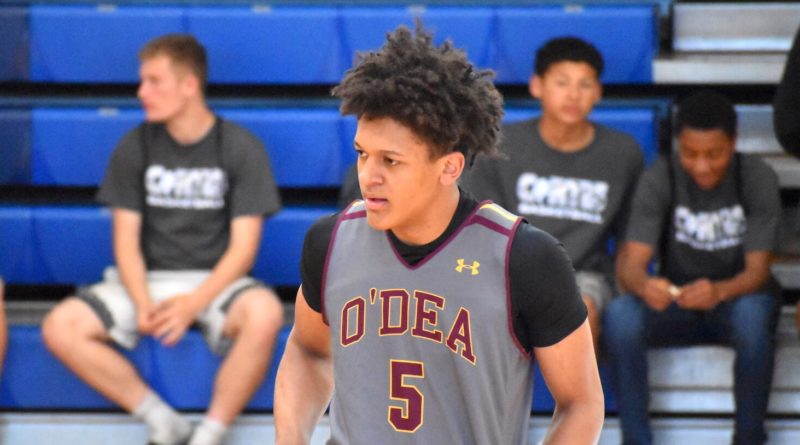 Lots can change in two years, but right now, O’Dea’s Paolo Banchero (basketball) and Eastside Catholic’s J.T. Tuimoloau (football) are arguably the top recruits in the country in their respective sport for the class of 2021.

So it got us thinking at Scorebook Live — who are the best different-sport athletes of all-time in Washington coming out of the same graduating class?

The criteria is somewhat fluid, but one directive has to be clear — overall impact in a particular sport, at whatever level.

Here are our top five boys’ tandems (and in a couple of cases, trios), and top three girls’ duos of all time:

Let’s see, a class with the best left-handed pitcher in state history, and two of the best Seattle metro basketball stars who played in the NBA? This choice was a slam-dunk No. 1 selection.

Lester, the Gatorade state baseball of the year in 2000, has flourished in the biggest major-league markets, serving as a bona fide ace pitcher.

Roy not only was hailed as one of the true four-year deliverers in UW men’s basketball (2002-06; Pac-10 player of the year as a senior), he lifted the spirits of an NBA city in Portland after he was the Trail Blazers’ first-round pick in 2006 (No. 6 overall).

Roy was the NBA’s rookie of the year in 2007, and three-time Western Conference All Star before a degenerative knee injury cut his professional career short.

Then there is Robinson, who despite his diminutive size (5-foot-8) is arguably the top three-sport standout (basketball, football, track and field) the state has ever seen.

He led Rainier Beach to a Class 3A basketball title at point guard. Purely on his explosive jumping ability, he once held the all-time Washington mark in the 110-meter high hurdles (13.85 seconds). And he earned a football scholarship to the UW as a defensive back.

Robinson was a first-round pick of the New York Knicks in 2005, played for eight NBA teams and was the first three-time NBA dunk champion (did we mention his jaw-dropping vertical jump ability?).

A yesteryear tandem this high at No. 2?

Those who watched Conley excel at the highest level in two sports might argue this ranking is too low.

The 6-foot-9 giant who led Richland to its first state basketball title (1947) became the first and only person to win world championships in baseball (1958 World Series title with Milwaukee) and basketball (three-time NBA champion with Boston in 1959-61).

In major league baseball, Conley was a four-time All Star, finishing third in the National League rookie of the year voting in 1954 (ahead of slugging teammate Hank Aaron). He won 91 games, and finished with a career earned-run average of 3.82.

In the NBA, Conley played six seasons total with the Celtics and New York Knicks, amassing 2,069 points and 2,212 rebounds in 351 games.

The West Sound’s most accomplished athlete all-time, Heinrich guided the Knights to an undefeated record and state football championship in 1947 before going on to set UW passing records and become the Huskies’ only two-time All-American quarterback (and was 3-0 as the starter against Washington State in the Apple Cup).

As a pro, Heinrich played in three NFL championship games with the New York Giants, including one as the starter of the 1956 title-winning team under offensive coordinator Vince Lombardi.

Again, much like our top class, 1988 was full of elite-talent depth.

And with Emtman and Keller, a case could be made that they were the top athletes ever from Washington to represent their respective sports.

Emtman, the unheralded hulk out of Cheney, was the nation’s top defensive player in 1991 as a unanimous All-American, winning the Outland and Lombardi Trophies and placing fourth as the UW’s highest Heisman Trophy finisher.

He was the top overall selection of the 1992 NFL Draft by Indianapolis, but saw his pro career limited to six seasons by knee injuries.

Keller, a three-time Parade All-American in high school for the Rams, was a true trailblazer for U.S. goalkeepers going overseas to play against the best in the world.

In 2009, Keller returned to his native area to become the Seattle Sounders first goalkeeper of the Major League Soccer era. He is in the U.S. National Soccer Hall of Fame.

Not the deepest class of next-level athletes, but Hendrickson’s underrated dual-sport career and Milloy’s booming football prowess were enough to lift them to the No. 4 spot all-time.

Few teenagers can boast a better high school career in two team sports than the 6-foot-9 Hendrickson, who led the Bulldogs to back-to-back Class 3A state basketball titles (1990-92) and was named the Gatorade state player of the year as a senior.

In baseball, Hendrickson was part of Mount Vernon state championships in 1990 and 1992. He even qualified for the state tennis tournament.

Hendrickson went on to play power forward in basketball and pitcher in baseball at WSU, and was all-Pac-10 in both sports.

If Milloy wasn’t such a spectacular enforcer-type safety, he easily could have joined Hendrickson in the exclusive professional two-sport fraternity.

The Abes’ star was a heck of a pitching/outfield prospect, and was taken twice in the MLB Draft (he even faced Hendrickson when the two Pac-10 rivals played eight times a season).

But Milloy’s sport was football, and the unanimous All-American performer for the Huskies (and Jim Thorpe Award winner) in 1995 was so impressive in pre-NFL Draft meetings, he charmed even the most headstrong coaches in the league – New England’s Bill Parcells and Bill Belichick.

So many great classes could have filled this No. 5 slot – 1981 with Shadle Park’s Mark Rypien and Centralia’s Detlef Schrempf; 1993 with Franklin’s Corey Dillon, North Thurston’s Mike Sellers and Prairie’s Richie Sexson; 1997 with Ellensburg’s Ja’Warren Hooker and Woodinville’s Marques Tuiasosopo, and so on – but the tiebreaker for the 2000 group was an eight-time Winter Olympic medalist (Ohno).

Ohno is not only a world-class athlete, having captured Olympic gold medals in the 1,500 meters in 2002, and 500 meters in 2006, he turned himself into a bona fide worldwide celebrity.

In all, he won 32 medals, 12 of them gold (one at world junior championships, eight at world championships and two at the Olympics).

Quietly, Ridnour went about his business as a pass-first point guard.

He won back-to-back Class 2A basketball titles at Blaine (1999. 2000), earning Parade and McDonald’s All-American honors as a senior.

Ridnour set the career assists record at the University of Oregon (218) en route to Pac 10 player of the year honors in 2003.

He ended up playing in the NBA for 12 seasons after being selected 14th overall by the Seattle Supersonics in 2003.

Sizemore was signed to go to the UW to play football and baseball, but when the Montreal Expos selected him in the third round of the 2000 MLB Draft, and offered a hefty signing bonus, he entered the professional ranks.

And for a three-year stretch, there were few better five-tool outfielders in the big leagues than Sizemore, who was a three-time American League All Star (2006-08), a two-time Gold Glove winner (2007-08) and Silver Slugger Award winner (2008) for the Cleveland Indians.

Sizemore played for three more organizations, but was never the same after a second microfracture knee surgery in 2013.

Given that Akers is on the short list of greatest women’s soccer players in U.S. history, named the FIFA female player of the century, this was an easy selection for the top spot.

In fact, Akers starred as a three-time All American at Shorecrest at the same time Shorewood’s Lori Henry played. Both were members of this 1984 class, and were starters on the same U.S. Women’s National Team that won the 1991 World Cup.

It was a 1991 season for the ages as Akers tallied an astounding 39 goals in 26 matches, including 10 in the World Cup. She scored both goals in the finals match – a 2-1 U.S. victory over Norway.

Tibbles was the first true small-school girls basketball standout who flashed a no-hesitation stroke from any spot on the floor. When she left in 1984, she was the state’s all-time leading scorer (2,568 points) – then left four years later with the Gonzaga University career mark (2,011 points).

If you like lots of scoring, few athletes were better than these two standouts in their respective sport.

Baumgardt was a four-time SPSL first-team midfielder who led the Eagles to the No. 1 national ranking in her final two years (1991, 1992). She tallied a school-record 98 career goals.

After that, she became the University of Portland’s all-time assists leader (50), then made 16 appearances with the U.S. Women’s National Team between 1993-98.

The things about Starbird, a two-time Parade All-American for the Lancers, is that she could score against any defense – and defender. By the time she left, she had totaled a state-record 2,753 points.

Again, so many classes could easily fill this spot at No. 3. But with Sumners’ international success on the ice, and Harris’ one historic race, this impressive tandem got the nod.

Despite being an elite athlete, Harris isn’t as well-known as other standouts – primarily because her peak performance came before graduation.

But when the rangy speedster ran a blistering 400 meters in 51.45 seconds, it instantly became the fifth-fastest time ever nationally for a high school runner (and is just outside the top 10 now).

Sumners never competed in any WIAA sports activity, but “Roz” won her first big all-around title at the 1980 World Juniors – then was a three-time national champion (1981-84), world champion (1982-83) and silver medalist in the 1984 Winter Olympics to East German star Katarina Witt.