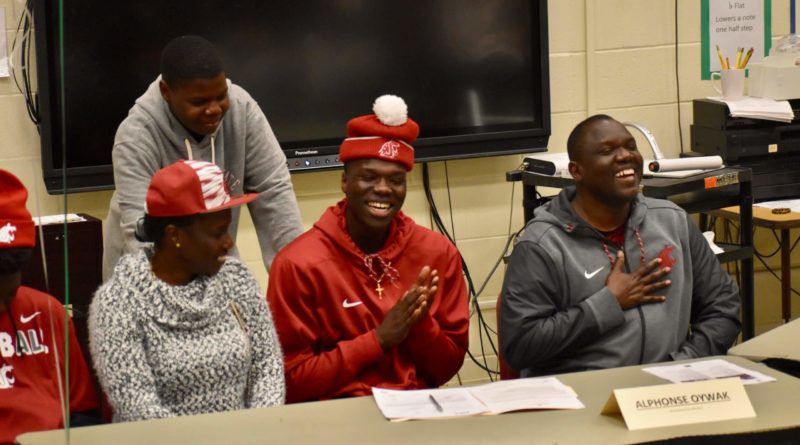 He couldn’t hide his giddiness.

Neither could the affable Oywak, who signed with the Cougars on Wednesday after a whirlwind final few weeks of the 2019-20 recruiting season.

“I just wanted to go where I could build a foundation the next three or four years,” Oywak said. “Football lasts only so long.”

Back in July, as his recruiting stock was on the rise, Oywak (6-foot-1, 175 pounds) gave Arizona a verbal commitment.

And the two-way, all-4A NPSL standout was firm on that decision until the Wildcats dumped thee of their defensive assistants, including defensive coordinator Marcel Yates and linebackers’ coach John Rushing – Oywak’s primary recruiter.

“When Arizona lost its defensive staff, it changed things a little bit for Alphonse,” Bush said.

Nick Rolovich was hired to replace Mike Leach as the new WSU football coach in mid-January, and the Cougars’ staff immediately reached out to Bush about his four-star defensive back.

What helped was that Oywak had some familiarity with Rolovich and many of the new WSU assistants when they recruited him while at Hawaii.

“(Rolovich) is really down to earth,” Oywak said.

Oywak made an official visit to Pullman last weekend. On Monday, he announced on Twitter than he was switching Pac-12 programs, and headed to WSU where he will play cornerback.

“Honestly, that means a lot to me,” Oywak said. “And I have a lot of respect for the people who have been here for me. Being able to play in front of them, and my family, is the cherry on top of it all.”

That includes Bush, who played wide receiver for the WSU football team, and was a guard for the basketball team.

When Bush appointed himself the Kentwood defensive coordinator last season, he knew who he wanted to build it around: Linebacker Trevon Erickson.

Erickson had his best season as a senior, and on Wednesday he signed with Dartmouth over Georgetown and Columbia.

He just visited Dartmouth a week ago, and immediately liked it. He will likely start out at inside linebacker.

“From day one, I knew his college choice was based on academics,” Bush said. “He is a thinker. That is why it took him so long to make (a college decision).”

Midway through his Kentwood football career, Gabe Johnson wasn’t sure how long he’d stick it out.

He was a struggling linebacker who needed a spark.

A position switch did just that.

The two-time, 4A NPSL first-team running back signed with Valley City State University, an NAIA program in North Dakota.

“There is a lot of culture there,” said Johnson, the team’s 2019 offensive MVP who made an official visit there last weekend. “I wasn’t expecting that kind of diversity.”