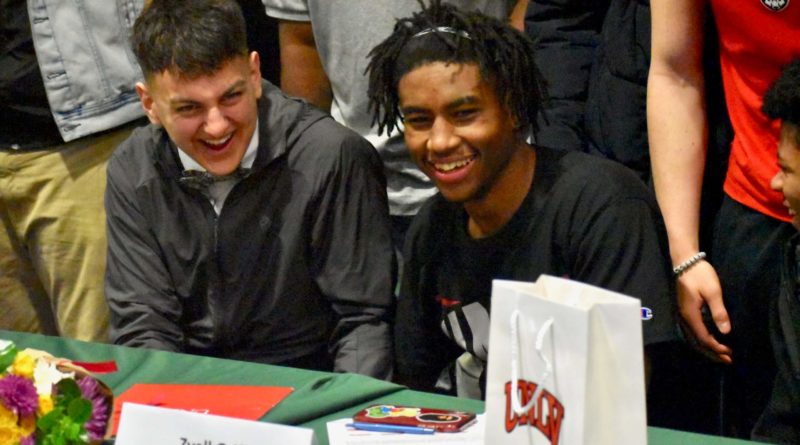 VANCOUVER — UNLV doesn’t have a history of landing many recruits out of the state of Washington in recent years, but that changed on Wednesday’s National Signing Day.

It’s the first time since 2010 that UNLV has signed two players from the state of Washington in the same class, when Ferris’ Kjelby Oiland and West Valley’s (Yakima) Brad Overand joined coach Bobby Hauck when he left Montana for Las Vegas.

According to 247 Sports National Recruiting Editor Brandon Huffman, the Rebels have done well for themselves.

“I think UNLV is getting a steal,” in Griffin, Huffman said.

Dixon, though, is one of Huffman’s favorite players he’s watched across the state, and he likens the senior to current Boise State pass-rusher Curtis Weaver.

Dixon also held offers from Eastern Washington, Montana State, Idaho and Nevada. Huffman suggested that size alone may have deterred bigger schools from recruiting Dixon, who is considered undersized as a 6-foot-1 pass-rusher. He posted 43 solo tackles (167 total), 12 sacks, one forced fumble and five fumble recoveries during his senior season, per MaxPreps, which ended with a loss to Eastside Catholic in the 3A state championship.

“A lot of my coaches think I was slept on, but honestly, I just want to play at the next level and be the best,” Dixon said. “You know, I want to feel wanted. I’m just going to bring that fire and that skill level that I have to UNLV and show what I have to offer.

Griffin had Pac-12 measurements and tested at a power-five conference level, according to Huffman, attracting several Pac-12 coaches to pay visits to Evergreen.

As his recruiting began to pick up, Griffin also came to face a stark message: his grades needed to be raised in order for big schools to offer him. Arroyo, who was previously Oregon’s offensive coordinator, was among those recruiting Griffin, though the Ducks never offered him.

“It was pretty much like, if I don’t get my grades up, I can’t do what I want to do for the next five years, I can’t make it to my dream,” Griffin said. He now has all As. “If that’s what I have to do, then that’s what I’m going to do.”

On the field, Griffin boasts big-play potential. He logged two 99-yard touchdowns in his first three games as a senior. He said he plans to bring that big-play spark to Las Vegas.

For Evergreen, seeing its multi-year do-it-all playmaker off to a Division I program is emblematic of the step forward the football program took this past season.

“I saw him a bunch in the spring, went to their game against Garfield up here,” Huffman said. “I thought he was criminally under-recruited.”

Dixon and Griffin met when they visited Eastern Washington, then UNLV together. Griffin was offered at the beginning of January, and Dixon on Jan. 23, and the two committed within two days of one another. Dixon said he was impressed with the UNLV coaching staff’s recruiting presentation, given how little time they had to put it together.  The school first announced the hiring of Arroyo on Dec. 13.

Will UNLV make recruiting the state of Washington more of a priority now that the staff is in place? Time will tell.

“Does it open inroads to O’Dea? Who knows?” Huffman said. “But does it hurt? No.”

Griffin and Dixon are grateful for the opportunity, and hope to make an immediate impact playing in Allegiant Stadium, the forthcoming new home of the Oakland Raiders.

“We have a group chat with all the commits from UNLV so we’ve just been talking like ‘we need to be the best class to come out’ and strive for greatness,” Dixon said.

Andy Buhler is a reporter for Scorebook Live Washington covering high school sports across the state. Hear him weekly on the Scorebook Live Today podcast, follow him on Twitter @AndyBuhler; email at andy@scorebooklive.com.