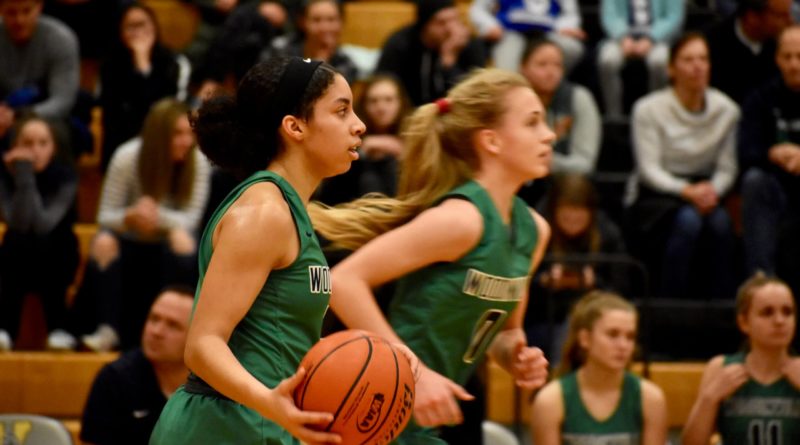 Scott Bullock knew coming into this season that he had a pretty good Woodinville High School girls basketball team.

But this good? This perfectly unblemished?

The top-ranked Falcons left no doubt they are the class of the 4A KingCo after a convincing 59-39 road victory over No. 3 Inglemoor on Wednesday night in Kenmore.

Junior forward Mia Hughes had a game-high 30 points and 11 rebounds, and Woodinville limited the Vikings to just one second-quarter field goal while finishing the first half on a 9-0 run to grab a 29-14 halftime lead.

The Falcons moved within one game of becoming the first school to run the table in the 4A KingCo since Bothell did it in 2016-17. They close out the regular season Friday against Newport of Bellevue.

“Not only do we have a tough league, but we’ve faced some tough teams like Lynden Christian, Kentridge and Lake Washington,” Bullock said. “(Going undefeated in the 4A KingCo) would be an amazing accomplishment.”

A note to future opponents: To have a shot in knocking off the Falcons, you better make shots from the floor.

On Wednesday, the Vikings did not – and the Falcons got plenty of easy buckets in transition, like they always do.

“Our strength is in the transition game,” Bullock said. “We have people running the wings, and Mia is always running in the middle of the floor.

“Of all the players I’ve coached, Mia has this gear when it goes from defense to offense. She is not our best defensive rebounder because she is always thinking of getting out (and running). She gets out on the break like nobody I’ve ever seen.”

IN THIS LAST-HURDLE LEAGUE GAME, MIA HUGHES PLAYED LIKE THE LEAGUE PLAYER OF THE YEAR

Because of her insane work rate, and nose for offensive rebounding, Hughes often gets tagged as just a weak-side terror.

But on Wednesday, she put her vast scoring skill on display – knocking down baseline jumpers, scoring on twirling layins in the lane, and yes, scooting up the floor in transition.

Hughes scored three quick baskets in the first 1:24. She tallied her team’s first 11 points of the second quarter to finish the half with 19. And she kept the pressure on in the second half, too.

She made 13 of 19 field goal attempts on the night.

“Mia carried us tonight,” Bullock said. “That might be one of her better games this year. She was fantastic.”

AFTER THIS FLAT PERFORMANCE, IS INGLEMOOR MORE OF A DANGEROUS DARKHORSE OR STILL A LEGITIMATE 4A CHAMPIONSHIP THREAT?

After wins over Issaquah and Eastlake in league, and non-league wins over Lake Washington and Lake Stevens – they are clearly the 4A KingCo’s second-best team.

But their big misfire – stretches of questionable decision-making and shot selection – Wednesday was certainly unsettling with the postseason looming.

“I don’t think we showed up and played our basketball,” Inglemoor coach Kristina Schumacher said. “We kind of let Woodinvlle’s (clinching the league) title hover over us a little bit. We know what we’ll have to do to make adjustments.”

Make no mistake, with point guard Lucy Young running the show, and the emergence of some of their younger players, including sophomore Colbi Zorich and ninth grader Dulcy Solomon, this is what you’d call a dangerous contender.

The Falcons know it.

“No lead is safe against Inglemoor,” Bullock said. “We hope to seem them again.”