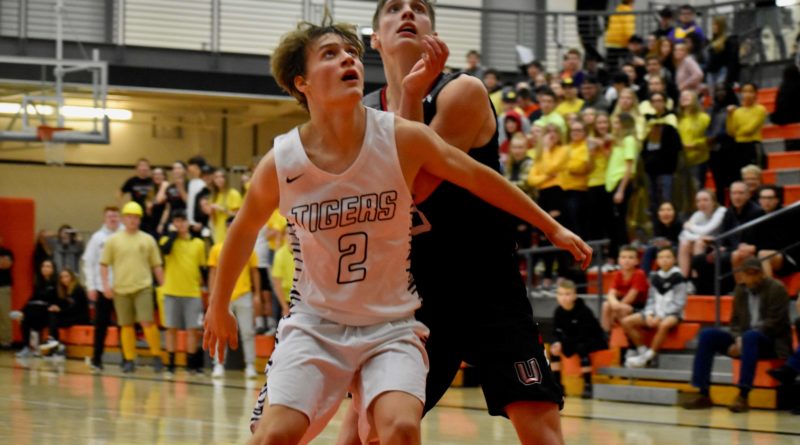 On Tuesday, they showed guts.

Union withstood the late knee injury suffered by dynamic playmaker and facilitator Brad Lackey to come back on Battle Ground late, 73-72, to win at least a share of the 4A Greater St. Helens League title at Battle Ground High School in spite of Kaden Perry’s 28 points, 21 rebounds and four blocks.

Mason Hill led the undefeated No. 1 Titans (18-0) with 26 points, included two key 3-pointers late in the fourth quarter and Tanner Toolson had 17.

Nate Millspaugh and Brendan Beall combined for 25 points for the Tigers, who with a win over Skyview would help secure home court advantage in the regional round with the second place standing.

There were laughs, cries, celebration and, ultimately, sorrow and raw emotion.

“One of the best kids and most program guys, most Union basketball players I’ve had the pleasure to coach is not going to be playing with us,” Conley said. “To know that is pretty hard right now.”

ON A NIGHT MARRED BY A DEVASTATING INJURY, UNION’S BIGGEST CONTRIBUTIONS CAME FROM ROLE PLAYERS

The big news coming out of the game was that of Lackey’s knee injury, which could have a ripple effect across the 4A landscape with postseason on the horizon.

But it should come as solace to the Titans that several role players stepped up when Battle Ground sought to limit Toolson.

Union coach Blake Conley said they knew Hill would be open throughout the night based on the way the Tigers defended them the first time, and when they got him the ball, the 6-foot-5 forward made them pay.

So did Briscoe with five second left when, Battle Ground leading by one, Union saw the 6-foot-9 Perry on Toolson, and instead had Toolson inbound the ball. He found a cutting Briscoe, whose sole job was “get it and rack it.”

How did the Titans dig deep after losing its steady-handed point guard late?

“We were just together,” Briscoe, who has stepped into a more prominent off-ball guard role as a junior, said. “Every time we come around the huddle, we’ve got to dig deep, got to give it up, and we just did that as brothers.”

BATTLE GROUND MAY HAVE NOT GOTTEN THE WIN, BUT IT SURE CAN TAKE A LOT AWAY FROM TUESDAY

Battle Ground may have lost the game. But the Tigers have so much to hang their hats on. That what senior guard Brendan Beall came to grips with after his clean look at a 3-pointer missed at the buzzer.

“We played the best game we played all year and Manny (Melo) says it all the time, sometimes you play great games and don’t win and that’s what happened,” Beall said.

Beall, who has made a name for his last second heroics, thought the shot looked good, but understands it’s not something he should dwell on.

Battle Ground lost 7 of 8 consecutive games in December stretching into January, and responded by winning three in a row to sit at second in the 4A GSHL.

Now, the Tigers have seen their best basketball heading into a road game against Skyview Friday that will be decisive in postseason home court advantage.

If BG learned one thing Tuesday against the top-ranked team in 4A, it’s that it can beat any 4A team on any given night.

The Tigers led by eight at halftime, the first time Union has trailed at half all season, and led the vast majority of the game Tuesday night.

“We had some breaks,” Conley said. “Battle Ground played so well.”

And Kaden Perry’s monstrous effect on the game continued, as the Gonzaga commit’s junior season has even further established him as one of the top bigs in the state.

“Even though it’s going to be a loss in the win/loss column, how we played is going to boost our confidence going into these next few games. … there’s still a lot of season left for us,” Beall said.

WHERE DOES UNION GO FROM HERE? HOW DO TITANS SANS-LACKEY FARE STATEWIDE?

The quick answer: it’s too soon to tell, for certain.

But it’s worth asking.

Tuesday’s game was Union’s closest win of the season, and while Lackey has yet to get an MRI for official confirmation, his feared loss for the season calls to attention just how much of a gap there appeared to be between Union and second place in 4A, and now, what does that look like?

Though Lackey was the team’s primary ball handler, one of Union’s strength is how versatile its lineup is. Typically, the fast break starts with whoever gets the turnover — one through five.

So the Titans will have options at point guard, such as Kaden Horn, Ariyah Briscoe, Josh Reznick, Izaiah Vongnath, or Toolson himself.

Andy Buhler is a reporter forScorebook Live Washington. Hear him weekly on theScorebook Live Today podcast, follow him on Twitter@AndyBuhler; email at andy@scorebooklive.com.