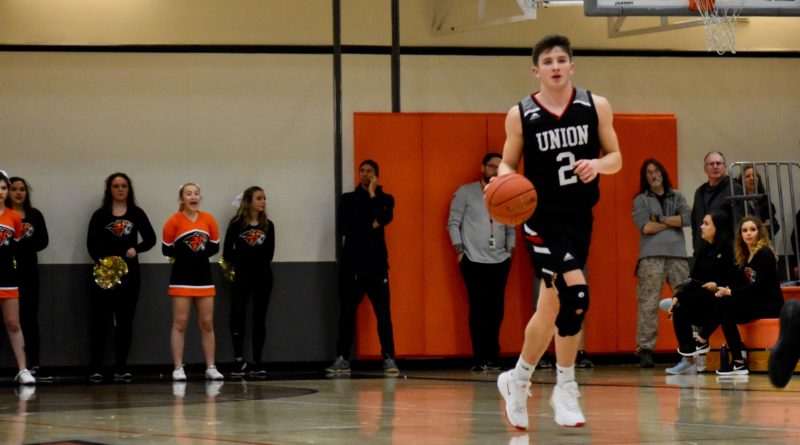 Senior guard Brad Lackey suffered what is is feared to be a season-ending knee injury, coach Blake Conley confirmed after the game, leaving the No. 1 Titans without its point guard, de-facto team leader and second leading scorer.

Lackey was evaluated by a doctor after leaving the game, Conley said, and will undergo an MRI Wednesday for confirmation.

“Every single guy in that locker room is crying right now,” Conley said. “For him, and just a guy who has put everything into this program, to not be able to finish with us is just hard. It sucks.”

Lackey landed awkwardly on his right leg after he drove to the hoop, elevated and was met by two defenders with 2:25 left in the fourth quarter. He immediately favored his right side and was eventually helped off the floor by Union staff. He walked off on his own power, limping.

The Titans (18-0), the No. 1 ranked team in 4A, filed into the locker room, collectively cheery in the wake of its win, which was won on an Ariya Briscoe go-ahead layup from an inbound with two seconds left, but filed out of the locker room, one by one, visibly emotional.

Support for Lackey poured in on social media from coaches, players and fans.

Mount Si coach Jason Griffith heard the news after a win at Newport.

“Gathered our team up when we got off the bus and talked about how much this bums me out for Lackey and my friend (Conley),” Griffith said. “Have a ton of respect and admiration for Lackey.”

Conley called Lackey one of his favorite players he’s coached.

“He’s a guy at camp in fifth grade that everyone wanted on their team,” Conley said. “At Titan camp. We knew he was going to be good, we were saying ‘hey, Lackey is coming up,’ and he exceeded those expectations and more. Just his selflessness and everything he brings from a leadership standpoint from a toughness standpoint, just from a great person standpoint, it’s irreplaceable.”

Lackey, a second team all-4A Greater St. Helens League selection as a junior, had blossomed into one of the state’s top guards this season. He averaged 14.4 points per game.

“The one thing I told the guys, Brad’s pissed right now, he’s sad, the one thing we could do to make Brad even more pissed is to not give it all on the court and let this effect us on the court in the next games,” Conley said.