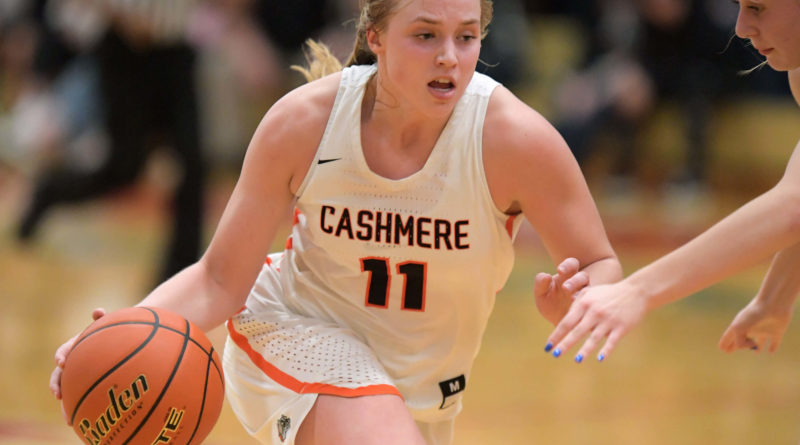 On the back wall inside Mike Martin Gymnasium on the campus of King’s Schools, there is a Bible verse in clear view – to serve as an inspiration for its basketball teams.

It reads, “Put on the full armor of God.”

And on Saturday afternoon, the Knights needed every bit of shiny battle gear to take on the best senior point guard in the country.

For the only time in her storied career, Hailey Van Lith and the Bulldogs played a high school game on the west side.

The Louisville signee did not disappoint a sellout crowd in Shoreline, scoring a game-high 39 points, and the top-ranked Bulldogs beat No. 6 King’s, 65-44.

“We kind of expected a big crowd,” Van Lith said. “We love to feed off that. We executed really well.”

Well before the junior-varsity game, the King’s gymnasium began filling up to capacity.

Not only did the King’s rooting section come with fire and energy (and a post-game formal dance proposal from one of its students), the matchup drew all sorts of basketball types – girls, boys and coaches from other schools; younger AAU up-and-comers and lots and lots of media.

“The interesting thing Is, everywhere we go, it is a little bit like this,” Cashmere girls coach Brent Darnell said. “That girl draws a crowd.”

Van Lith got off to a slow start Saturday, missing four of her first five shots from the floor, and turning the ball over on a travel violation.

That inspired a few King’s students to chant, “Overrated!” – which was a grave mistake.

Van Lith tallied 23 of her 30 first-half points in the second quarter, dominating on both ends of the floor with steals, acrobatic drives and fallaway jumpers in the lane, all for buckets.

And the chants quickly went away.

“I get that a lot,” said Van Lith with a smile. “It just hurt them, because that turns me on when people say that. I love that.”

VAN LITH ISN’T A FULL-TIME POINT GUARD FOR CASHMERE. BUT SHE IS A FULLCOURT MENACE

Some coaches would wind up a player of Van Lith’s caliber and watch her go. But not Darnell, who adroitly utilizes the 5-foot-9 guard in different spots on the floor.

Van Lith is arguably the best ball-handler in the state, and will play at the point the majority of the time. But Grace Hammond, Riley Johnson and even Jalynn Darnell (the coach’s daughter) will shoulder some of that workload.

It also gives Brent Darnell the flexibility to play Van Lith on the wing, or especially against zone defenses, at the high post where she can dribble into the middle of the lane (an obvious sweet spot) and make big plays.

It is similar on defense: Van Lith will play in the back of the 1-3-1 zone, or when the Bulldogs jump into their man-to-man pressure, she can take on the other team’s primary ball-handler.

“By constantly moving her around, you just can’t get used to where she is,” Darnell said.

Van Lith is special, and a great deal of what the Bulldogs do – or are able to do – runs through her.

But the reason opposing coaches think Cashmere is more difficult to game plan for this season is the play of their secondary standouts – Hammond at guard and Grace Erdmann in the post. Both are seniors.

Hammond is a pure outside shooter, and makes defenses pay for overplaying on Van Lith. Erdmann is so athletic at 6-foot-1, she can defend point guards as easily as she can centers.

“They’ve been playing AAU together since the sixth or seventh grade,” Darnell said. “They provide a fun dynamic to our team.”