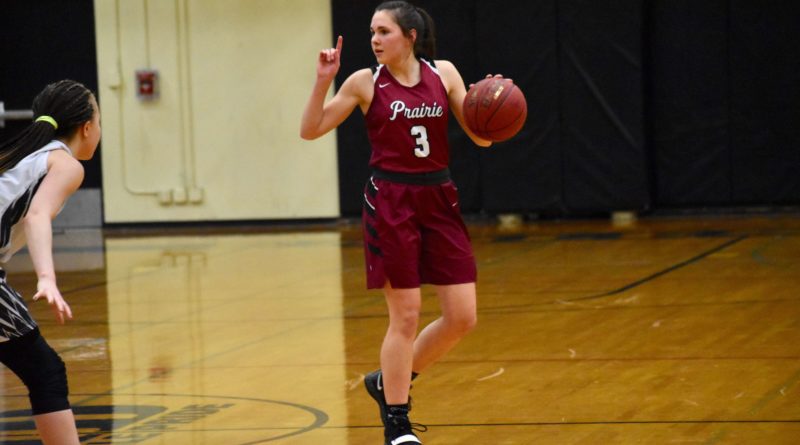 VANCOUVER — Hala Corral walked off the floor of a rowdier-than-usual Hudson’s Bay gymnasium, turned to no one in particular and yelled, twice in succession, “not tonight!”

Not if she has anything to do with it.

Prairie, the defending 3A girls state champions, defeated Hudson’s Bay 57-44 on the road in a battle of unbeaten teams atop the 3A Greater St. Helen’s League standings . On a night when some believed Bay could put an end to the 20-year league win streak, was the Falcons picked up their 213th consecutive league win.

Tuesday’s opponent did put that streak on red alert.

Claire Heitschmidt scored 19 points, Meri Dunford had 16 and Dayna Vera added 12 for Prairie (8-6, 5-0). Bay was led by junior forward Jaydia Martin’s 16 points and 15 points from junior forward Kamelai Powell, as the Eagles welcomed back two key pieces into the lineup.

THERE MAY BE NO BETTER WORD FOR PRAIRIE THAN THIS: DYNASTY

The year was 2000 and the Al Aldridge-led Prairie girls basketball team lost a league game to Battle Ground.

It would be 20 years — and counting — before the Falcons did so again.

If Tuesday night proved anything, it’s that if Hudson’s Bay wants the 3A GSHL title, it’s going to need to take it from Prairie.

These Falcons don’t go down easy. But it’s not the gargantuan win streak they have in mind. Rather, the goals are more incremental: a deep postseason run, which starts with a league title.

So to ascend to sole possession of the top spot in the standings by one game is a big step in that direction.

“I’m super proud of them for not buying into all the hype. … my kids have a lot of pride. It’s on them tonight, they played great.”

When highly-regarded freshman guard Mahaila Harrison went down with a broken hand the day before the season opener, it was just the latest blow to Bay’s season, and it hadn’t even started.

Sophomore phenom Aniyah Hampton was still more than halfway through recovery for a ruptured achilles tendon.

Bay needed someone to step up in the meantime. That someone was Martin. The junior has led the Southwest Washington region in scoring to compensate for Hampton’s scoring output, as the No. 8 Eagles have marched out to a hot 13-3 start to the season.

On Tuesday night, Hampton made her return off the bench, albeit on a minutes restriction and not at 100 percent, as did Harrison — both welcome returns.

“It felt really good, no pain or anything,” Hampton said. “Just happy to get back onto the court playing with my team.”

Hampton said she wanted to make her return for the Prairie game, to prove Bay could finally beat the Falcons. She’s practices for three weeks now, and looks forward to more live game experience playing more than 20 minutes per game.

“I really wanted to beat them, but we still have one more shot,” Hampton said.