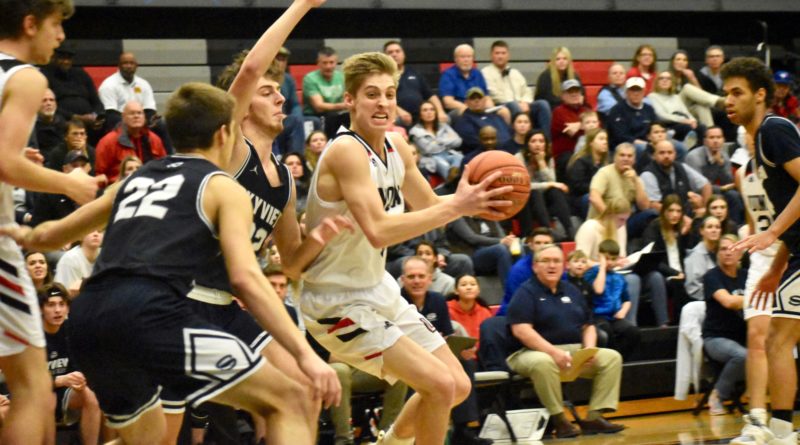 VANCOUVER — Union experienced something on Tuesday evening that it hadn’t yet through the first 16 games of the season: a close game.

Skyview gave the Titans just that.

The Storm cut the game-long deficit to seven in the final minutes, but Union pulled away to win 72-58 on Tuesday night at Union High School.

Tanner Toolson scored 29 points for the No. 1 Titans, who conclude the first half of 4A Greater St. Helens League play 16-0 on the season.

No. 8 Skyview, paced by Kyle Gruhler’s 19 points and Squeeky Johnson’s 15, dropped its third consecutive loss and drop to 11-5 on the season.

“In all honesty, we need to play in games like that,” Union coach Blake Conley, whose team holds an average margin of victory of more than 33 points per game, said.

After a pair of Squeeky Johnson steals and ensuing baskets, Skyview had cut Union’s lead to seven with around five minutes left in the fourth quarter.

“He just said, ‘hey, we’re fine, we’re going to do this. Believe,’ ” Conley said. “I think hearing something like that from a guy like that is good for our guys, and we came in and made some plays.

“I knew I didn’t need to say anything.”

From there, Union regained a double-digit lead. Horn scored five straight points, including a corner 3, and Toolson provided the game’s top highlight with a slam dunk late.

Conley credited Lackey, a senior, for his leadership giving the team the extra push it needed late.

KADEN HORN IS A MICROWAVE OF A SCORING OPTION FOR UNION

At the end of the first quarter, it was a contested 3-pointer. Going into halftime, he beat the buzzer with a baseline floater.

And he almost did it again in the final seconds of the third quarter, too.

Kaden Horn came off the bench and needed no time to heat up. He finished with 16 points and seemed to hit important shots that inched control of the game more firmly toward Union.

Bench scoring is something Horn has provided as a double-digit scorer this season. And the junior, who transferred from Mountain View, can lead the Titans in scoring on any given night.

“The only time I really get on him is when he doesn’t shoot,” Conley said. “He passed up a couple shots, he’s just trying to be unselfish. But kid has a knack for scoring, really likes to compete and I think our guys tried to find him in the right spots.”

Teams already have Brad Lackey and Tanner Toolson to scheme against. Why not add a lights out shooter (he was 4 of 7 from 3 Tuesday night) to the mix?

Kyle Gruhler’s shoulder has been nagging him over the course of this season, but it would have been hard to tell on Tuesday night.

Gruhler’s 19 points, 13 boards and late-game hustle plays helped keep the Storm in the game (as did Johnson’s active hands on defense).

He was a low post presence, and a monster on the glass, and also hit a contested step-back 3-pointer in the fourth quarter.

As the Titans were pulling away late, Gruhler chased down a loose ball, but before he could turn and dribble, Toolson snatched the ball out of his reach, turned, took two dribbles down the baseline and flushed an authoritative two-handed slam.