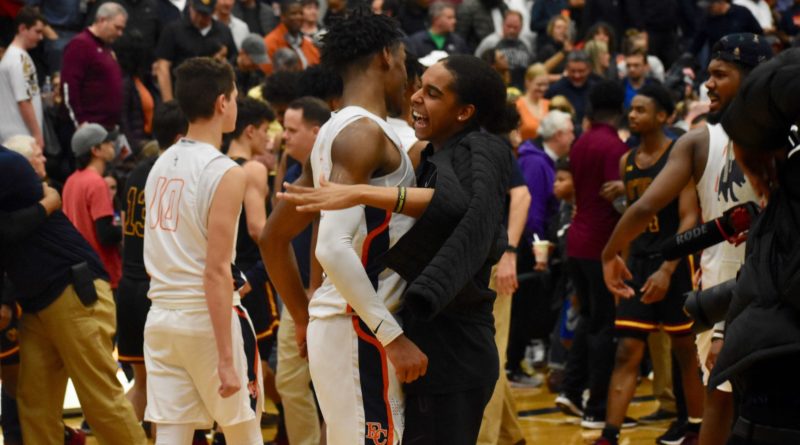 SAMMAMISH — It seemed as though from the moment the ball tipped, Nolan Hickman could not, and would not be stopped.

The junior point guard poured on 29 points to guide No. 2 Eastside Catholic to an 83-74 win against No. 1 O’Dea at Eastside Catholic on Monday, in a Metro League showdown that took place six days after it was postponed.

O’Dea was led by Paolo Banchero, who dazzled with 29 points in front of a packed house littered with high-major college coaches.

NOLAN HICKMAN WAS THE PLAYER OF THE GAME. IS HE THE STATE’S BEST POINT GUARD?

Banchero and Hickman have played together since the two were six years old, and are teammates on Seattle Rotary in the summers.

So Banchero knew what Hickman was capable of. He’d seen the 6-foot-3 point guard hit his stride before.

Hickman also fed off of the raucous environment.

“It hasn’t been packed like this in a minute, so for that to be packed out and for the student section to be loud, that’s the kind of atmosphere I like,” Hickman said.

Hickman rolled his left ankle in the final minute, and walked out of the locker room on crutches with it wrapped. He doesn’t think he will miss any time.

In some of Eastside Catholic’s best wins, of the season, it has set the tone and controlled the pace early. That’s what happened Monday, which Hickman said was part of the plan.

“The plan was to come out here and punch them in the mouth as soon as possible,” Hickman said. “That’s what we did.”

Eastside Catholic coach Brent Merritt said he was most impressive by his players’ intensity from the tip. The Crusaders built a 19-point lead in the first half.

The bulk of O’Dea scoring came from Banchero, who fought through tough-nosed Chika Nduka and spent most of the night guarded one-on-one on his way to 29 points.

Wing Jermaine Davis was the only other double-digit scorer for the Fighting Irish with 10 points.

“Paolo, he likes to dish,” Hickman said. “They’ve got a lot of shooters, so we definitely played that good as well.”

Banchero helped trim the deficit to single digits early in a fourth quarter in which he had 14 points, but the Crusaders created distance, in part credit to Tuimoloau’s eight points in the final period.

WAS THIS A PRECURSOR TO A LATE STATE PLAYOFF SHOWDOWN?

Merritt turned coy when asked if the Crusaders hoped to run into O’Dea again in March.

It’s a reasonable prediction, believing the top two teams in the state are on a crash course to meet again deep in the postseason. But the Crusaders didn’t overvalue Monday’s win: it’s another league win, as well as a confidence-booster, according to Shane Nowell.

They say that, in part, because of of what happened last year.

Eastside Catholic beat O’Dea on the road in the regular season, and when the two met again in the 3A state semifinals, O’Dea got the best of them, 49-41, en route to a state championship.

This year, Eastside Catholic feels the state title is theirs for the taking.

Banchero, cool and collected, said he’s rooting for a rematch.

“I expect to see them again,” he said.

STAR POWER OF 1 VS. 2 BROUGHT OUT COACHES FROM THE NEXT LEVEL

Any time this much high school star power is on the court, expect to see college coaches sprinkled throughout the crowd.

That was the case Monday, starting with newly hired Washington State football coach Nick Rolovich, who made a pit stop on his Seattle-area introductory tour — whether he was already recruiting, just making an appearance, or both — which included impromptu meet-and-greets at several Seattle bars.

Oregon football coach Mario Cristobal was in attendance to watch the Tuimoloau, regarded by experts as the nation’s top 2021 recruit, showcase his footwork on the basketball court.

As well as several other Pac-12 assistant football coaches, Oregon State basketball coaches and a coach from Pepperdine, likely among others.

There were several uncommitted Division I prospects on the floor, including O’Dea guard John Christofilis, Eastside Catholic forward Shane Nowell and Hickman, in addition to five stars Tuimoloau (football) and Banchero.