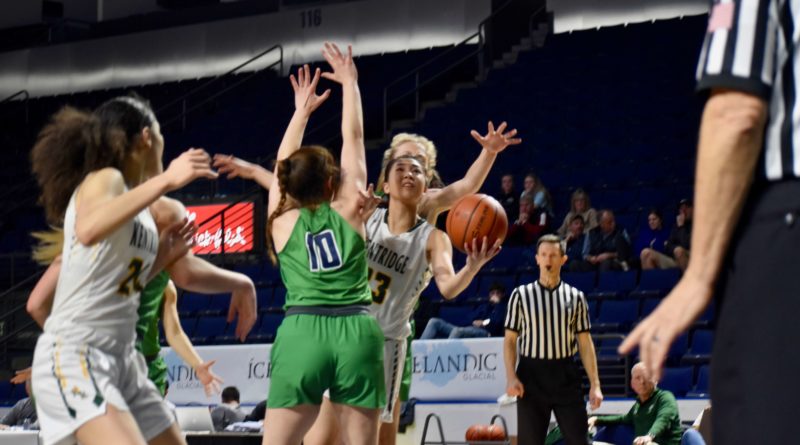 The largest Martin Luther King holiday basketball tournament in the state – eight boys and girls games – was held at the ShoWare Center in Kent on Monday.

And there were plenty of exciting matchups, including a few involving ranked teams.

Here are recaps of the four headliner games of the day:

JC Humphrey was the only scorer in double figures for Tahoma – 12 points – which made just 12 of 45 field goals, and turned the ball over 13 times.

No. 1 – Turning the keys over to Kai Johnson a good thing: Ethan Gahm has been the longtime starting point guard for Olympia, but coach John Kiley appears ready to turn that responsibility over to Johnson.

Johnson’s off-the-dribble slashing ability is a big reason why Kiley made the move. He also is a better fit if the Bears continue to want to play fast.

“When the ball in his hands, you have to watch him all the time,” Tahoma coach Rick Tripp said. “It spreads the floor, because you are extending a guy out.”

Gahm, a more physical presence, has shifted out to the wing while Zack Swanson is coming off the bench as the team’s backup point guard.

No. 2 – If Olympia wants to make a serious move, Kiley knows in what area the Bears have to improve: Interestingly, for a team that returned four of five starters, Olympia has done a lot of experimenting with lineup rotations this season.

It hasn’t come with its difficult moments: Olympia has been swept in the 4A SPSL by Sumner, and dropped another game against Rogers of Puyallup to fall from near the top of the state rankings.

But Kiley thinks his team is ready to take a final jump.

“I believe we have one more big step of just competing defensively, and I thought we did a decent job of that tonight,” Kiley said.

No. 3 – Tahoma was ready to unleash sophomore Cooper Church on a bigger stage Monday. Maybe next time: It’s easy to see why lower-level NCAA Division I programs are showing Church interest.

Church is 6-foot-9. He moves around the court well. His game travels inside and outside.

So, Tripp was very interested to see how his big guy would matchup with Grant, one of the state’s top class-of-2021 recruits who has given the University of Washington a verbal commitment

The verdict? Chruch scored two points on 1-for-5 shooting, and sat large stretches of the game.

“He had zero rebounds,” Tripp said. “He’s got to be assertive. If you watch him, defensively he didn’t even move. I don’t know if he was afraid … or it was too big of a moment. It surprised me. He’s been playing pretty well, and today he laid an egg.”

No. 1 – Woodinville is clearly the team to beat in 4A … but don’t forget about the Chargers: There is lots to like about both of these programs.

All four of the Falcons’ key regulars – Sheffey, Hughes, Thompson and Brooke Beresford – can run the floor and handle the ball.

All four of them are rangy, with Sheffey (5-9) being the shortest of the quartet. All four can shoot and pass. They all make free throws.

“Woodinville is one of the best teams in the state right now. They obviously have a goal,” Kentridge coach Brad McDowell said. “We are getting closer.”

Make no mistake, having Jenkins, arguably the best post player in the state (and USC signee), out with a season-ending knee injury had a big impact. More falls on the plate of Ballena and Denckla, both seniors.

Kentridge’s fullcourt pressure was a big reason why the Chargers whittled a 21-point deficit down to 53-47 with three minutes remaining.

“We are obviously in that state of adjustment right now,” McDowell said. “But we have some ability and skills that enable us to compete with the best teams in the state.”

No. 2 – If Tatum Thompson is your No. 3 or No. 4 option, you are in good shape: If you don’t recall seeing Thompson on the Woodinville varsity last season as a ninth grader, it is understandable – she sat the bench and waited her turn.

Her opportunity is now.

The 5-foot-11 forward was fantastic Monday, not only as a rebounder (game-high 16 boards), but she flashed an impressive mid-range game, especially around the free-throw line.

Thompson might be clearly behind Hughes and Sheffey on the pecking order, but her contributions clearly matter.

“She’s probably the most athletic girl we have as far as being able to jump and run,” Woodinville coach Scott Bullock said.

No. 3 – It is obvious that Kiernen Denckla will be a big part of the Chargers’ plans moving forward: Ballena is the flashy playmaker for Kentridge, but no player, on both ends, will be more vital to the team’s rest-of-season success than Denckla.

At 5-foot-9, Denckla has the skill to play on the perimeter, and the strength to defend bigger post players on the interior.

McDowell is now allowing Denckla to carry some of the point-guard responsibility just to give Ballena more opportunities to score from the wing.

“She is a senior. She is a leader,” McDowell said. “She has a lot of things she can do.”

Senior Tyler Patterson scored five of his 16 points in the final 74 seconds, including a game-sealing 3-pointer with 32 seconds remaining, and the reigning 4A state runner-up Wildcats survived in Kent.

Tyler Linhardt, arguably the top player in the 1A ranks, poured in a game-high 28 points for the Knights.

No. 1 – Mount Si keeps winning, but there is room for improvement: As if Wildcats coach Jason Griffith needed a reminder, watching King’s 6-foot-7 standout have his way on the interior, he knows what his team has to improve on over the final few weeks of the regular season.

“Last year, we had five guys who understood what our philosophy was defensively. We had that football player (Jonny Barrett) that was a tough kid who could defend any spot on the floor.

No. 2 – And yet, when it came to defending Linhardt in the fourth quarter, a Mount Si star volunteered: Jabe Mullins knows what he is – a sharp-shooting scorer and a better defender against more physical players.

As Griffith was considering going to a box-and-one defense to try and take Linhardt away, Mullins intervened – and asked to take on the talented sophomore.

“(Linhardt) was doing pretty good the first three quarters … so I asked coach, ‘Let me take him,'” Mullins said. “He is a great player, tough to guard. I tried face-guarding him to make it as tough as possible.”

For a brief 2 1/2-minute stretch to start the quarter, Mullins did a pretty good job disrupting the flow. And in a close game where every possession mattered, it meant a lot.

“I told them at the start of year, we scheduled 10 state championship games where you will have to be at your best to win,” Skeen said.

And, oh yeah – they played four 6A teams in a holiday tournament in Arizona.

“You get better through adversity,” Skeen said.

Julia Bordeaux scored 21 points, and her 3-pointer with 57 seconds remaining gave the Lions the lead for good (66-65) – and helped Bellarmine Prep avenge its 4A semifinal loss to the reigning state champion Wolves.

Bellarmine Prep ended the game on a 7-2 run over the final minute.

Arizona State signee Keeli Burton-Oliver led all scorers with 30 points. She had a chance to tie the game in the final seconds, but her top-of-the-arc 3-pointer fell short.

No. 1 – Yes, the Lions like the underdog role for a change: Bellarmine Prep had a fantastic run last season, reaching the state semifinals after upending Central Valley in a memorable round-of-eight showdown.

They returned Bordeaux and point guard Callie Stevens, but lost senior Makiah Reed to a serious knee injury in the offseason.

Yet with no height and little depth, the Lions have posted non-league wins over Union, Seattle Prep – and Eastlake on Monday night.

“That is the underdog story,” Lions coach Kim West said. “It’s the little plays, and the little things that matter.”

No. 2 – Stevens to Bordeaux – like Montana to Rice?: Twice in a back-and-forth final quarter, Stevens got the ball in the backcourt, looked up and sent a bullet pass more than half the court to a streaking Bordeaux.

On the first one, Bordeaux collected the pass, and dumped it off to teammate Riley Cusack for an easy bucket – and three-point play.

The second time, Bordeaux took it herself, was fouled – and sank two free throws.

There is obviously a special connection between the two senior captains. Stevens led the Lions with 27 points, with Bordeaux adding 21.

“Callie sees the floor extremely well. She’s got such good handles, when she gets a rebound, she knows how to run (the fastbreak),” Bordeaux said. “It is really fun. Those transition plays are staples for us.”

No. 3 – There are a few weeks left for the defending 4A champions to gain a head of steam for the playoffs: It is late January, and Eastlake holds a 6-8 record.

And yet, the team’s frontcout with Keeli-Burton, junior Haley Huard and ninth grader Ava Schmidt might one of the better ones in the state.

At this point, Eastlake coach Sara Goldie’s biggest concern isn’t the development of her younger guards. It is for a vocal leader to step forward and lead this group heading into the playoffs.

“It is tough, I have a lot of leaders by example. And you love that, because they are out there busting their butts,” Goldie said. “But that vocal, calming leader – we don’t have that.”