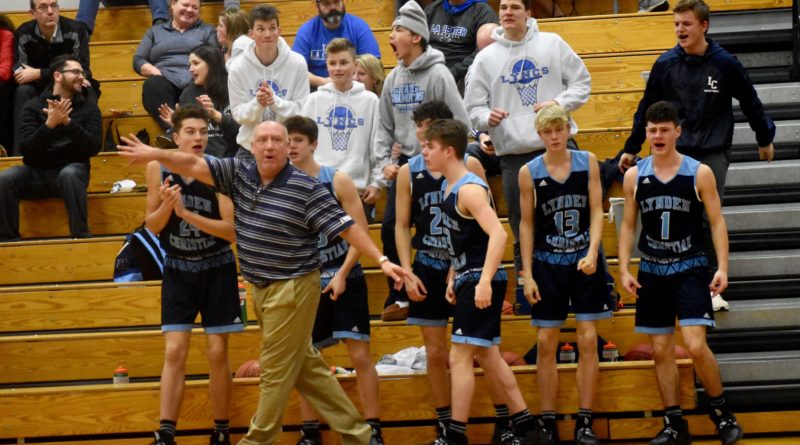 LA CENTER — Lynden Christian walked out of perhaps its toughest road environment to date with a win in the scorebook, and a boost in the RPI rankings.

The Lyncs, No. 4 in the 1A coaches poll, took down No. 6 La Center in overtime, 81-76, in front of a packed and rowdy La Center High School gymnasium on Saturday afternoon, in a battle between two 1A state title contenders.

The Lyncs held an eight point lead going into the fourth quarter, but La Center clawed back and pulled within one when Ecklund hit a 3 with five minutes to play. Ecklund drew and hit two free throws in the final seconds to tie the game, and Lynden Christian missed a last-second heave to send it to overtime, where the Lyncs created distance.

NO COLE BAJEMA? NO PROBLEM

The Lyncs may not have the star power they did a year ago in four-star 6-8 forward Cole Bajema, who is now playing for Michigan.

But don’t for a second think that means this team is any less of a contender.

The Lyncs find scoring from a wide range of players, most notably senior guards Andrew DeVries and Bouwman, as well as junior Jaden DeBoer.

The Lyncs’ season to this point has been marked by the contrasting forces of the recoil from a state championship contending football season, and a tough nonleague schedule.

The greatest signifier that they’ve come out on the other side of that is Zach Sipma.

When the senior suited up for the basketball team a few weeks into the season, he had swollen ankles, and like many of his teammates (14 basketball players were on the football team), had work to do getting into basketball shape.

On Saturday, he showed just how much of a difference he can make.

Sipma, who at 6-3, 230 pounds is also one of the team’s quickest players, logged a double-double (15 points, 15 rebounds) and was instrumental in the Lyncs owning the glass. They held a 12-rebound advantage over the Wildcats.

The Lyncs feel they are cutting their teeth with the hard schedule. Their three losses came to Burlington-Edison (No. 1 in the 2A coaches poll), Monroe (4A) and undefeated No. 4-ranked Glacier Peak (4A).

Consider Saturday’s overtime thriller to be La Center’s last tune-up before its most anticipated game of the season — so far.

The Wildcats turn around and prepare to play No. 5 King’s Way on the road, the first of two league matchups between a team that has been on its heels for a league title for several seasons.

Both made the 1A state semifinals last season (King’s Way made the finals as a 10-seed), and both teams enter the game unbeaten in league play.

Getting a tune-up against 1A title contender Lynden Christian is just the latest of a slew of tough non league competitors the Wildcats have faced this season — its three other losses came to 2A SPSL league title contender White River, 2A Olympic League contender Port Angeles and No. 1 Zillah (1A).

“Playing a team that does that same thing as us (play fast) and tries to slow it down too, made us work a little more and find our teammates a little better and play team ball,” Ecklund said.

The Wildcats say it’s only helped them heading into a three-team league title race (along with Seton Catholic) that could be the classification’s most competitive, especially now that the Knights will be missing standout sophomore point guard Bryson Metz, who will miss roughly six weeks with a broken foot.

“Before the game we’re talking about being resilient, and there isn’t a better example of being resilient for this team. It’s just what we do, it’s how we’ve always been. Just another game, gutting one out. We’re not the biggest team in the world, but I think we have the biggest heart out of anyone.”

Check out the game highlights: