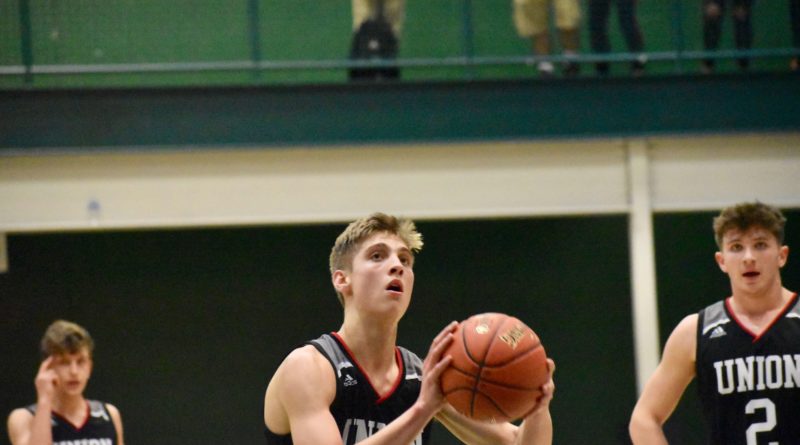 Tanner Toolson has blossomed into one of the most impactful high school boys basketball players in the state of Washington this season and is playing like the frontrunner for 4A state player of the year.

And he only has two Division I offers.

But that is likely to change, very, very soon.

As D-I schools are expressing more and more interest, and several power-five programs that were not recruiting Toolson this summer are now re-evaluating him, the Union High School senior is an intriguing case study into what a big high school season — particularly a senior season — can do for a player’s college prospects.

If Vegas made odds for high school sports, my guess is Toolson would be the overwhelming midseason favorite for 4A player of the year, despite not being a feature on his club basketball team over the summer.

The 6-foot-5 senior blossomed from a 5-foot-6 freshman, a JV player as a sophomore, then erupted as a dynamic first team all-4A Greater St. Helens League slasher as a junior, leading Union to an undefeated regular season.

His numbers are staggering through 14 games: Around 22 points, 8.6 rebounds, 2.7 assists and 2.5 steals per game with 45.7 percent 3-point shooting, 55.7 percent overall. And he’s gone head-to-head with the likes of Mount Si’s Tyler Patterson, a Montana State commit, and Jabe Mullins, a Saint Mary’s commit, as well as Liam Lloyd at Gonzaga Prep, a future D-I guard with a similar build.

Colleges are picking up on it, too.

Utah, BYU and Air Force have told Toolson they are coming to watch him in person this month, and Oregon State has expressed increased interest, in addition to Utah State — all schools Toolson said were not recruiting him over the summer.

Toolson, who classifies himself as a class of 2022 recruit because he plans on going on a two-year mission with the Church of Latter Day Saints after high school, played for club outfit Washington Supreme alongside Washington commit Jackson Grant (Olympia), now-Grand Canyon commit Lloyd (Gonzaga Prep) and highly regarded point guard Maui Sze (Ingraham via Roosevelt, Bishop Blanchet) — a team in which over the past year, he wasn’t the feature player, nor was he relied upon for volume scoring.

When it comes to the annual calendar for high school basketball prospects, there are two seasons: the high school season, and the club season, which takes place in the spring and July.

There, players are likely to have the most exposure to college coaches — the under-17 Under Armour Association circuit being no exception. After a summer on the circuit, Toolson came away with offers from University of Portland and Utah Valley, both of which Toolson said came after a D-I camp at the end of July.

But contact from coaches largely dropped off after July, he said.

Carl Howell, Toolson’s 17U coach at Washington Supreme, told colleges the best of Toolson was yet to come. He’d seen the wing, whose dad played for BYU and had a professional career that included two stints with the Utah Jazz, make significant improvements to his game in the spring, then again in the summer.

“One thing with Tanner, everyone told me this, he was going to be a real late bloomer,” Howell, now the head boys basketball coach at Skagit Valley College, said. “He improved a lot from spring to summer, now he’s made another jump. He’s in a unique situation.”

Howell is also shocked as to why other Division I schools in the region are so late to the game on Toolson. “How is University of Portland the only Northwest school who has offered him?” Howell said.

But Toolson’s late rise has been meteoric — and uncommon. Seriously, when was the last time a player in Washington went from a JV player to a state POY contender in less than two years?

There have certainly been other late bloomers in-state.

Due to Washington Supreme’s depth chart, Toolson wasn’t able to showcase his scoring abilities in the same way he is now at Union. He noted that while the UAA season was “obviously stressful” causing “a little frustration to set in,” he always knew he was going to be able to come back to Union, play his senior season with his classmates, and do exactly that: score the ball.

“It’s really nice to know you had a season in front of you,” Toolson said.

And what a statement he’s making in the process.

Let that be a lesson to the discouraged, the overlooked and the under-recruited.